Get email updates from Deepa: 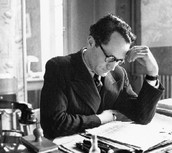 Relation to Holocaust: He helped more than 2,000 people in danger escape the Nazis. 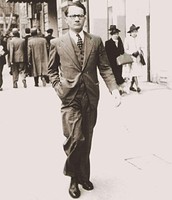 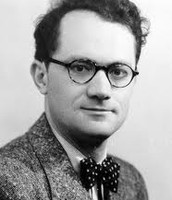 www.imdb.com
Watch the latest Varian's War Trailer on IMDb
A movie was made on Varian Fry's journey in Europe! Check out this extra feature! 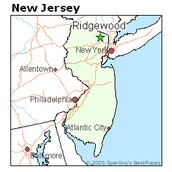 Varian Fry was born on October 15, 1907 in New York City, New York, United States of America. Then, he moved to Ridgewood, New Jersey and spent most of his childhood there. His father worked in Wall Street and his mother was a public school teacher. He was lonely, yet very brilliant. He wore glasses and wasn't very athletic. He also didn't like his name and unsuccessfully, tried to persuade people to call him "Tommy". He enjoyed reading and working in the garden with his father. His passion of bird watching began when he saved a Cedar Waxwing from his cat.

Fry also loved to spend his summers with his grandfather at the Children's Summer Home. This home was run by the Children's Aid Society. Charles Fry, Varian's grandfather, spent many years bring orphans and abandoned children to this home. His grandfather was a "child rescuer". These experiences perhaps inspired Varian to eventually be motivated and decide to rescue the Jews from the Holocaust.

First, Varian Fry attended a local Ridgewood School. Then, he was accepted into Hotchkiss, a prestigious school in New England. He was recommended by his local school and described as "An excellent student with character above reproach,".

When he attended Hotchkiss, he had a great academic record and made a few friends. However, he felt like he never belonged there. In his third year, he was hazed by some of the seniors. He believed that this was very wrong and stood up against it, refusing to do as they wished. The next day, he talked to his headmaster, saying that he didn't like the ways and traditions of the school. That very day, his father came and picked him up. This was an instance in which Fry stood up to what he believed wrong, which was what he would do as an adult.

He completed high school in Riverdale Country School. Here, he found out that he had gotten the highest score ever gotten on an English College Board Exam he had taken at Hotchkiss, a 99 percentile.

He was also accepted at Harvard College.

Fry enjoyed his time very much. He got to take the courses he wished to and had a passion for. He especially loved his "party life". This caused him to almost be expelled once.

Fry's passion of Greece and Rome classics emerged in these years.

He also began a literary magazine called "Hound & Horn" with fellow freshman, Lincoln Kirstein. This gave Fry a great motivation and basic knowledge for his passion, journalism. This magazine had works of many famous writers and poets at the time, along with students' works. This magazine was well known at the time.

Fry's First Look At The Holocaust

After college, Fry took up the job as a foreign correspondent for the American Journal, “The Living Age”. His wife, Eileen, was a school teacher. They settled in New York City.

For his job, he visited Berlin, Germany in 1935. There, he witnessed the brutal treatment of specific groups (Jews, Homosexuals, Gypsies...).

At that time, he decided that he wanted to help these people.

Fry's Involvement In The Holocaust

After the occupation of France in 1940, Fry went to Marseille, as an agent of the newly formed Emergency Rescue Committee. He went to France to help people who wanted to escape from the Nazis.

When Varian Fry was sent to Marseille, France, he had only $3000 and a long list of people that were imminent danger who he was supposed to evacuate. When people found out what he was doing, people came to his door, begging for help.

Working day and night, continuously, against all odds,he eventually got a group of people to help him with his operations. He established a legal French relief organization, called the American Relief Center, and through illegal ways he used black market trading, forged documents, and secret routes to help people escape.

In 1940, even though there was a strict watch from the Vichy regime, Fry and some volunteers managed to hide people in the Villa Air-Bel (a HUGE safe house) until they could be smuggled out. More than 2,200 people were taken to Spain, eventually neutral/safe Portugal, and were able to go to the United States.

He also helped people escape onto ships leaving for a French colony called Martinique. From that colony, they could go to the United States.

Through his operations, he helped more than 2,000 people evacuate Europe. Most of these people were recognized European intellectuals, writers, artists, scientists, philosophers and musicians. Since they came to America, they blended new cultures and ideas into our nation.

1) Hiram Bingham IV. He helped get passports for the refugees. He is known for issuing many many illegal and legal passports.

4) Albert O. Hirschman. After working with Fry, he would become a very influential economist and political/economic writer.

Fry's Life In America After Returning From France

Varian Fry repeatedly tried to warn and convey messages about the conditions in Europe to America, but he was ignored.

In September 1941, he was ousted from France by the Vichy Regime government because he was helping Jews.

He entered the field of Journalism again. This time, he was the new editor of "The New Republic", a liberal American magazine. He wrote a renowned piece called "The Massacre of the Jews,". This piece was featured as the lead article in the December 21, 1942 issue.

In 1942, he and his wife, Eileen separated. This caused Varian to enter a slight depression. However, Eileen died in 1948, making him feel even more isolated.

Varian Fry wished to serve in the armed forces, but he couldn't because he had an ulcer. So he, turned to writing again. At this time, he wrote Surrender on Demand, in 1945. This book was published by Scholastic under the name of Assignment: Rescue.

Varian Fry was also monitored by the FBI because of his illegal ways (even though they were for a good cause) in France. This prevented him from ever working for the United States Government.

In the winter of 1948, he met Annette Riley. They got married in November 1950. They lived in Connecticut and then moved to New York. He had three children with her (2 boys and one girl).

Throughout his time, he also wrote many memoirs about his experiences in France.

He spent most of his time with journalism, teaching, and serving on the boards of the American Civil Liberties Union. Fry began teaching at a boys' school. He taught Latin.

He and Annette got a divorce in 1967. Two weeks later, he was found, dead, in his bed. People believe he may have died of a heart attack or in his sleep. He was also editing and revising his memoirs at the time.

"Righteous Among the Nations"-By Yad Vashem, 1994 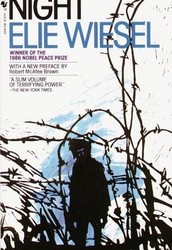 Varian Fry was an individual who helped rescue many people in the time of the Holocaust. In Night, Elie was rescued. This is in relation to Fry's occupation at the time in Europe, a rescuer. However, there is another relation as well. Many people died because they couldn't live long enough until help came, due to weakness, loss of food, or were simply sent in the line of immediate execution. This connection is that if there were more people like Varian Fry, then many more people could have been saved from the Holocaust, as shown in the book. 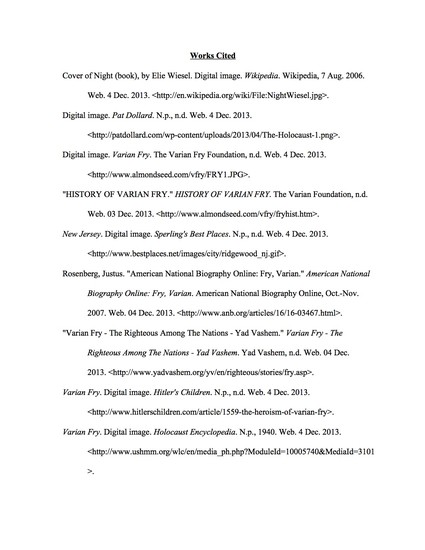 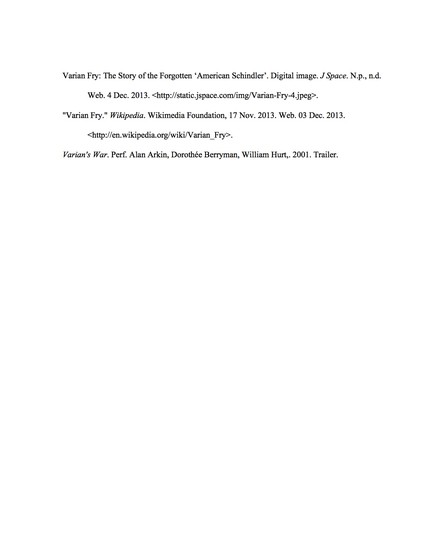