Mace is using Smore newsletters to spread the word online.

Get email updates from Mace:

*WHAT YOU DIDN'T KNOW*

*WHAT YOU DIDN'T KNOW*

Mountains-The Chaparral has peaks that rise up to 5,000 feet above sea level and the mountains are very steep. The valleys and streams are narrow and widely spaced! The chaparral biome has many different types of terrain. Some examples are flat plains, rocky hills and mountain slopes.

WEATHER-The chaparral is very hot and dry! The winter is very warm and is usually about 50°F. Most of the rain in this area comes in the winter. The summer is hot and dry at up to 100°F.This makes droughts and fire very common! All though there is only about 10-20 inches of rain a year, most of it is from the winter! Avereraging 7 inches in the winter and 2 for spring, that only leaves .2 for summer! but fall helps out with 4 inches!

RAWR!! These are some of our top predators!

Has no natural predators and is a carnivore that will eat just about anything you get it!

I'm what one would call a middle man eating just about anything and everything because I am an omnivore who has a menacing laugh!

We are at the bottom of the food chain eating bugs and occasionally plants, but we get eaten all the time :(

We as people like to expand, yes? Well in this expantion we have grow larger as a nation but have also lost many habitats for thousands of animals who had been living there for their entire lives.

The natural way of life is one lives and the other dies, right? Well then it should be no suprise that the animals will eat and kill each other. But not only that the animals could become over populated and die of starvationa and become extinct. These are all nothing we can properly fix. 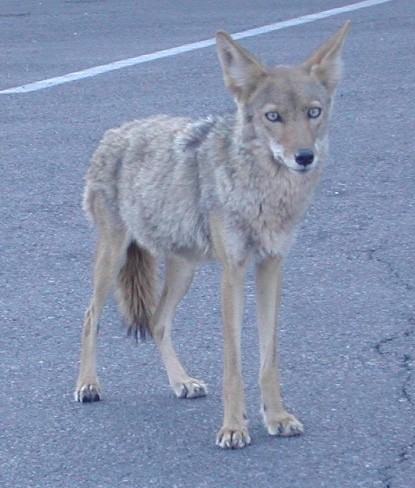 PREDATORS AND PREY? OR COMPETION

Puma- who has no predators after him!

Jakals and Foxes- they are preyed upon by pumas, they eat everything from rodents to berries

Birds-eaten by some foxes and jakals but eat bugs, and even lizards!!

Although there are alot listed these are just some of the few that make up this biome, they provide food and shelter for all of the animalsin the area!

-The blue oak has an extensive root system. It can grow through cracks in rocks to depths of 80 feet to reach ground water. Its root system allows it to survive in fire prone and arid regions. Blue oaks reproduce both through seeds and vegetatively from burnt or cut stumps. The light colored bark is thick and helps reduce fire damage

-From October to January the pappus catches the wind and blows away, like dandelions, helping Coyote brush spread its seeds.Another trick for survival is Coyote shrub's large root system which extends many yards out from the plant to make use of any rain that might fall in its dry habitat. Branches grow from a crown that forms at the ground and spreads out. Because of the dense root crown, Coyote brush is able to survive and regenerates quickly from such things as fire, floods, or clearing.

-The sagebrush survives its dry environment because of some of its adaptations. When rain is scarce its deep tap roots find water, but when it does rain it has shallow roots that are spread out below the surface to absorb the water. When it is very dry sagebrush can still be living, but look dead. When this happens it can get uprooted and spread its seeds when blown by the wind.

-To be able to survive in a hot and dry climate, olive trees have small leaves with a protective coating and hairy undersides that slows transpiration.

-Natural periodic fires have burned separate portions of the chaparral throughout history. Since people started building houses in the chaparral, these fires have been suppressed. Manzanita cannot regenerate unless the seeds are scarified by fire and the thick endocarp is burned off.

-changes of climate, and the poor soil. This tree seems to be invincible because it cannot be killed by an axe (it cannot be killed by taking chops at it), drought or fire, so it has been given the name "hardtack". Fires usually kill the top of the tree but the trees don't burn as quickly as other shrubs in the chaparral. They sprouts new growth from their root crown and grow quickly after a fire. The mountain mahogany loses its leaves during the hot, dry season to conserve water.

Mace is using Smore newsletters to spread the word online.