Don't judge a syrup by its bottle

Don't judge a syrup by its bottle

The Family Tradicion Since 1887

Log Cabin has been America’s syrup ever since 1887 when it was invented. Labor problems, location of manufacturing and prices have never been a problem or deemed unethical because it satisfies the classification of a good company to Americans. It produces jobs here in the US, everything is flown and transported domestically and safely. The problem for log cabin is none of those ideas stated above, but the problem with Log Cabin is its ingredients and its appearance. Log Cabin syrup has been getting away with the appearance of an American made, all natural product that is family friendly and relatively cheap. But after many scientific tests and studies, it is now known that practically nothing that is in that bottle is fresh. It’s all artificial flavoring and high sugar. After they received so many negative reviews they tried to make a newer version of their syrup and stamp ¨No high fructose corn syrup¨ but even that has been found to be a small stretch of the truth. Log Cabin isn't the product is is advertized to be, so next time you are at the grocery shop, maybe try and look a little harder for the more natural made products rather than the huge name brand company. Look at this picture below and you tell me, where is the natural Vermont syrup coming from, or was it an accident and they forgot it? 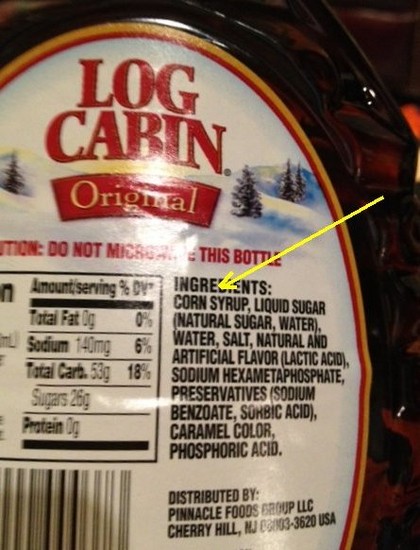