Kam is using Smore newsletters to spread the word online.

Get email updates from Kam:

Salvador Gorge is 1 in a rare 100,000 Holocaust survivors. That is a mere 100,000 out of savagely murdered 6 million in Hitlers rule. The incredibly intriguing stories of a childhood dodging the Nazis is filled with suspense and sorrow. Found in a movie theater one gloom, dark evening, Sal’s family was near thrown into a concentration camp, until they heard news that saved their lives. The camp was full. The train traveled on the track as Sal’s family was rescued by pure luck. Offered a dwelling in a wild, primitive setting, Sal’s family moves to a shack in Santo Domingo. He grows up there surrounded by jungle, brimming with wildlife and adventure. Sal’s riveting story on his uniquely remarkable upbringing captures the essence of the Holocaust in an indescribable way. 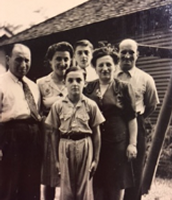 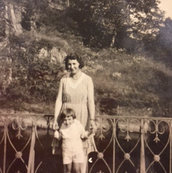 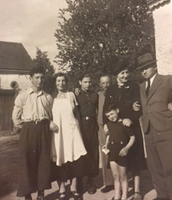 Above are photos of Sal as a child living in Santo Domingo. He is featured above in all of these photos as the young child with his family.

S: I was born in Luxemboug 80 years ago and my family and I lived in a very small town called Ethelbrok.

K: How old were you when the Nazis invaded?

S: I was five years old. They took our car, and we just had a couple suitcases and we left. We were scared. Then what we did was meandered through Europe to different areas wherever we could go. My mother had these quater pounds of butter. In the butter she put diamonds and when we needed money, she would cash in the diamonds. It was scary although I was very young. We would go into movie theaters at night and hide during the day, and finally they (the Nazis) caught up to us, and they captured us. They took us to go to a consentration camp called Lodz but when we got there, it was late at night I remember it was raining, and the camp was full. Luckly they had no room for us, so it kept going and it ended up in a simulation camp which is a place where they hold you but they don't tourture you. We stayed there for several weeks and the Jewish National Fund and Jewheal, who is the president of Santo Domingo, made a deal that if the parents were between 30 and 40, and the kids between 5 and 13, allowed 100 familes and got me into the country, and helped the Jewish people learn about farming and so forth. We had horses and cows and goats. We lived there for four years in a small shack. There was no running water and no electricity. After those four years, my aunt in Detroit sponsered us to come to America. When I was 12 I came to America, I couldn't speak any English, all I spoke was Spainish in Santo Domingo. My first recollection was they put me in kindergarten.

K: How did you grow up in Santa Domingo?

S: It was very wild. We lived near a river and the river had snakes and things. We used to catch snakes. I was a jockey, I used to ride race horses, not on a fancy race track, but we used to jump on wild horse and tame them. There was a fellow there his name was Jota and I remember we used to slaughter pigs, we would ride our horses into the mountains, and hide turantulas in things, it was a very interesting upbringing for a young boy. It was very primitive but at least we knew we weren't getting gassed or killed by Hitler. We were safe there. It wan't great but it certainly was better than the alternative. The American-Jewish congress was working behind the scenes and they saved us. 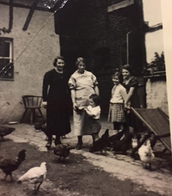 Living on the Farm

There a photo, my Papa is the small child. This photo shows the wild setting with the chickens roaming around

This is the bridge leading into the Lodz Ghetto. On one side is the a city in Poland, and the other the ghetto blocked with barb wire.

This photo show Jewish children in the ghetto eating a cup of soup, their food for the day.

About the Lodz Ghetto

Death blankets the streets Lodz Ghetto of Poland 1940. Hunger eats slowly away at the starving souls slipping away as just a number in Hitler’s 11 million. The Lodz Ghetto, an inhumane holding camp for Jewish people, was a place where an absence of food was a normality. Hitler wasn’t the only source of murder to the Jews. There was another cause sweeping the nation: hunger. Starvation took the lives of many in the ghettos which resulted in innumerable consequences. Everyone in the Lodz Ghetto was inflicted upon by the outstretching wrath of hunger.

Hunger was an absolute problem effecting the many lives of Jews living in the Lodz Ghetto. Inhumane food rations were meekly given, starving the mistreated people. The residents were willed to seek out a better alternative than no food. Many had little option but to steal just to barely stay alive. (“Life in Ghettos”) The Nazis ensured the Jews would starve by inflicting by fragmenting food supply. The high stakes for a smuggled good if it was undercovered was crime punishable by death, but the starving Jews still hunted down food knowing of the consequences. Children were imposed to sneak under the barbed ghetto walls to gather other food and haul it back to their undernourished families. (“Lodz Ghetto”) The conditions demanded a practical solution and that was simply to replenish their basic need for food. More than 20% of the ghettos population died of callous treatment. (“Lodz Ghetto”) Hunger played a lead role in those who died of the merciless suffering. Many problems went along side with having hunger. The Germans forced the Jews in the ghetto to work under savage circumstances. The strenuous work expected of the basically enslaved workers, could not be upholded in their state of well being. Muscles and joints are greatly inflicted upon by food. No matter how much one puts physical strain on the muscles, they will still be emasculated. (How Hunger Hurts) The Jews whole livelihood depends on their labor performance, food is needed to fuel a stable bases. When these starved underage children and workers couldn’t fulfill the expectations, the Germans would cut their wages making it extremely hard to be able to afford proper food and clothing which starts the hunger cycle over.

As you can see above, hunger swallowed these humans alive. This was a widespread issue not only effecting those in the Lodz Ghetto. Those in Hitler’s grasp were all horrendously mistreated and dehumanized. Hunger ended numerous lives and impacted the lives of countless more. This extensive issue is sometimes overlooked. Hunger today, as it was back in power of the Nazis, is a problem needs to be solved. It is imperative that hunger is not overshadowed as it was during the Holocaust. Thousand upon thousands suffered everyday due to scarcity of food. Hunger controlled the lives of those living in the Lodz Ghetto, triggering negative effects for all residents.

Thank you so much for taking time out of your day to share you incredible story. I know I will pass it down in the future and I hope it carries for many generations to come. I’ve learned a lot from your virtues and strength. Your influence has guided me through my life today. I hope other will feel the same as they listen about your inspiring childhood. Thank you for always being there for me and supporting me, you are such an amazing person and role model. You have changed my life and I know your story will touch many more.

I love you Papa!

P.S. I hope to see you and Big Mama soon! I love you both so much!

Blocked Out from the World

A fence surronding the ghetto blocks them in so they can't escape the ghetto.

This photo above shows the train that Sal was transportated in.

While my grandpa was in hiding, his mother would hide diamonds in butter. When they needed money, she would cash in the diamonds to get money. Bellow is a perspective as if you were the diamond in the butter.

I sit. I wait. I repeat. This cycle is what my life has become. My glistening edges are greased and slimy. I ponder; will I ever see light again? Will others ever see the rainbow I create as I bend the unbreakable into magical patterns? I don’t know. My sleek body is coated in a cream, a mixture of misery and despair. Pliable and thawed, my surroundings feel insecure and surrendered. Fear shackles my structure, and radiated to the peak of my head. I look for others like me in this ¼ pound of broken composition. No luck. I am in utter solitude. I retreat to the day; the day I last felt free.

It was a humid day in Luxembourg. I was sedentary, yet content. Everyday she would peer in on me. I was her prised possession. Life was carefree and I savored every last second of tranquility. Until we heard a bang. A bang on the door that turned life into the opposite. A wave of frenzy that tumbled over us. We staggered back but couldn’t catch our balance. That one knock displaced us. Trembling hands deceitfully shield me and carry me into the unknown. Defeated screams ring, throwing me into a perplexed deliria. I was carefully pushed into a rich mixture. From that moment on I wait: confused.

My home sways side to side. I am being transported somewhere. I can hear voices, closer than they normally are. A man and the women talk. I recognize her voice. I feel two fingers pinch both my buttery sides and carefully lift me up. The light blinds me and takes me time to adjust. I have been concealed from the simple pleasure of seeing and it comes back in an overwhelming burst. There are no words to describe how overjoyed I am to be out of that cage. I see the woman's eyes. She stares into me like connecting with a lost friend. Her eyes speak something different, changed after that knock. Her eyebrows are creased and worry strikes me and takes me back. She gently places me in the hands of a stranger. I don’t want her to go! She walks out the door and I glance one last time at her eyes that tell a story beyond what words can create. I see a mystery tucked away in her hand, she is clutching it with all of her might. The man breaks me from my thoughts and cleans me of my thick glaze. At last, I am unrestricted. At last, I am free. 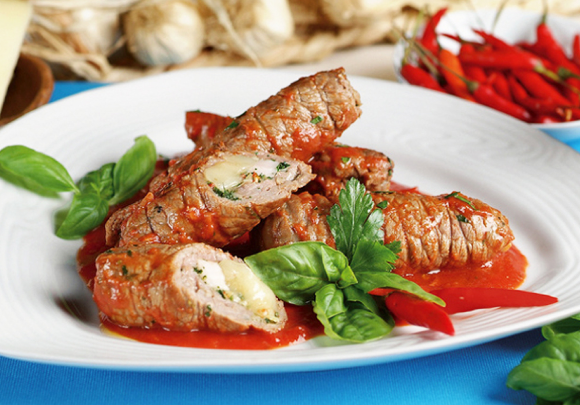 Above is a photo of a gourmet food thought of by many; horse meat.

Below is a recipe showing how to make delicious horse rolls

How to Make Gourmet Horse Meat

Living in the wild, many times my papa would be served horse, (without knowing it), because that was an abunt meat. Although he didn’t eat horse this gourmet, below is a recipe for how to cook this delectable meat.

How to make the sauce:

6. Once the pan is heated, pour the sauce in with the wine and olive oil

7. Place rolls of meat into the sauce and keep them at a low heat until they are a light brown and fully cooked through the middle

Kam is using Smore newsletters to spread the word online.