Get email updates from nathan:

the vikings are the best team in the world

the vikings are the best team in the world

how the vikings became a team

The Minnesota vikings started football on 1961 .The vikings had a hard conference the packers,lions,and the bears.They got to there first super bowl on 1972 they lost 35 24.but ten years later they went to the super bowl again and went against the dolphins and lost but they went too four super bowls and never won.

the Minnesota vikings had the best defense in the NFL for ten years 1960/1970.they also had a good records but so did the vikings conference. The games were intense when they played there conference and close scoring.

who the vikings are

the Minnesota vikings had 81 interspersion in 7 years.they also had very good players like randy moss or fran tarkerten or cris carter or percey harvin or sidy rice mike shinco. they where a very good team with thoso players. 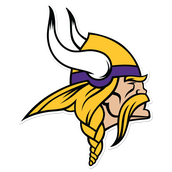 This is them in a game