Treatment of the Vietnamese

in the Vietnam War

Treatment of the Vietnamese

in the Vietnam War

The Vietnam War is commonly referred to as a war on civilians; the local Vietnamese people were treated extremely poorly and were subject to all of the same violence as opposing soldiers. 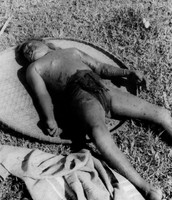 This civilian has been killed and lies dead on the ground. Though we don't know exactly why he was killed, he appears unarmed, so there couldn't have been a great reason to kill him.

These Vietnamese civilians huddle together and try to protect their baby from the violence occurring in this scene. these people look absolutely mortified by the violence taking place around them.

A Vietnamese woman is held at gunpoint by two gunmen for an unknown reason. This is appalling, especially after considering that a woman in this time would have no place on the battlefield, yet she is being treated like an enemy soldier. 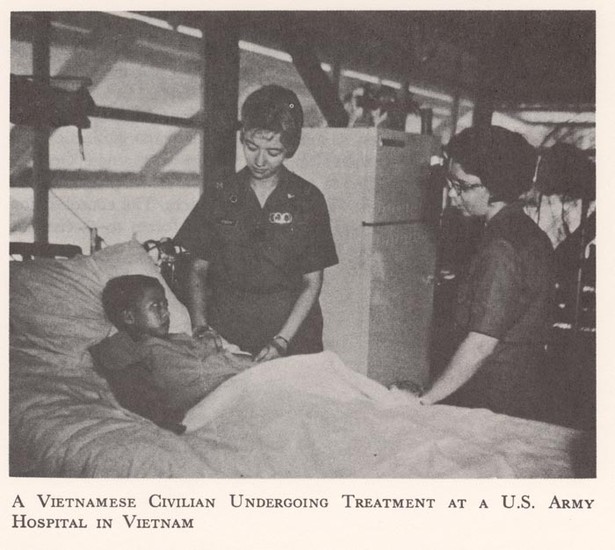 Despite the probable fact that this boy was injured by violence from the war, he is being taken care of in an American hospital. This shows that the Americans were not indifferent to the Vietnamese people. In fact, they are risking their lives trying to protect democracy for these people.

Strafe the Town and Kill the People

This short song by Les Cleveland is a dark tune that talks about the cruel treatment of the Vietnamese people by American soldiers. The song is basically a series of sarcastic instructions for soldiers in Vietnam, and our narrator is telling them to do some terrible things, like kill children on their way to prayer. Though the validity of this argument is unknown, hearing this disturbing piece forces a listener to wonder if it was actually like that over there.