History of the Caprese Sandwich

This sandwich was invented in a small town of Insalanta Caprese, Italy. It was originally made for a salad but now it comes in different forms. The Caprese Sandwich is known for its colors red, green, and white, which are the colors of the Italian flag.

How it got its name

The Caprese sandwich was named after the Italian island of Capri. This is where it originated. 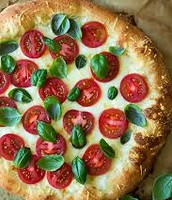 abc.go.com
This sandwich is great all year but it's particularly tasty in the summer when the tomatoes are in season. Try it for lunch, dinner or your next trip to the beach.

There are three out of four food groups being used.

1) Why is the french baguette used in most recipes? Gives a very toasty and crunchy feel to the sandwich.

2) What are the ingredients meant to stand for? the colors of the Italian flag.

3) How many sandwiches does the recipe make? 2-4

4) How did the sandwich get its name and why? named after the island of Italy, Capri

5) Who came up with the caprese sandwich and how? a man that wants to remain unknown.

Follow Kaitlyn Muniz
Contact Kaitlyn Muniz
Embed code is for website/blog and not email. To embed your newsletter in a Mass Notification System, click HERE to see how or reach out to support@smore.com