Dustin is using Smore newsletters to spread the word online.

Get email updates from Dustin: 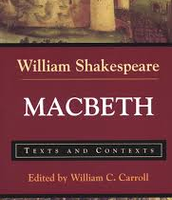 One similarity between the 2 versions was the fact that both scenes had dark lighting and dark eerie mood during the scenes. One difference is that in Goold's version, the scene took place in some sort of undrground/basement setting. Polanski's version seems to be in Lady Macbeth's bedroom as the book described.

Dustin is using Smore newsletters to spread the word online.