Panthea is using Smore newsletters to spread the word online.

Get email updates from Panthea:

Italy is a very small country located in Southern Europe, Italy is known for their olives, pizza, and pasta. The four countries touching Italy's borders are Slovenia, Austria, Switzerland, and France. People that were born in Italy are called Italians and their language is Italian. Italy is also known as The Boot.

Italy has a republic government called the Italian Republic with the chief of state being the president Sergio Mattarella and the head of government being the prime minister Matteo Renzi.

Italian children wait for La Befana to deliver presents the evening of January fifth so when they wake up on the sixth they can open up gifts. La Befana is a good Italian witch who was asked by the three wise men to join them in following the northern star to Bethlehem to meet the new born savior, baby Jesus. She initially declined to go with them, but later decided to set out on her own, however while on her journey the light of the northern star had diminished and she had lost her way. She never did get to meet baby Jesus and according to legend, she is still searching and everywhere she visits she leaves gifts for the children in hopes of finding baby Jesus. Children in Italy hang their stockings on the eve of January 5th, awaiting gifts from La Befana.

In Italy, most of the gift giving occurs on the day of the Epiphany, which is on the 12th day of Christmas. The Epiphany is the day the three wise men arrived at the manger bearing gifts for baby Jesus.

Italians do not eat meat on Christmas eve only fish and vegetables... it's their tradition. However, most families create a big meal to eat, including meat, pasta, deserts, and more! 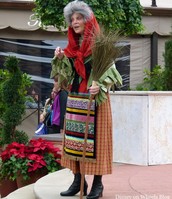 carries a lantern and a sack of toys 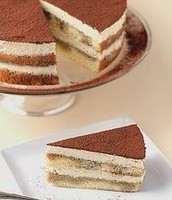 This is a popular desert in Italy, it is a soft, sweet, and mushy caffeine cake, made with coffee and liquor soaked lady finger biscuits and marscapone cheese that is topped with a dusting of cocoa powder.

Italy is known for La Befana to deliver presents during the holidays. You can look at the map to see were Italy is. Do you notice how Italy is shaped? It is shaped like a boot! That's were Italy gets it's nickname, The Boot. La Befana lives in the town of Old Barga located in northern Tuscany. The rainiest seasons in Italy are November and December. Cold and rain do not mix well together. 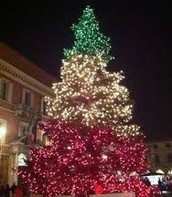 The Christmas tree is a pine tree that has cheerful lights twirled around it with ornaments hung from branches and garland, bows and a star on the top, Well, you don't need to decorate it like that. That's the best part of a Christmas tree, you can decorate it however you want to! Christmas trees bring the holiday spirit alive for many people.

Panthea is using Smore newsletters to spread the word online.