Over time eating locally grown food has become increasingly popular. People have become more aware of the damage that we cause to the environment, such as littering and greenhouse gas emissions. However not many people know that the food we choose to eat also has an impact on the environment.

Choosing to eat locally grown food rather than imports can decrease our carbon footprint. Transporting food over long distances to multiple locations pollutes the environment by releasing greenhouse gases. Therefore buying locally grown food or growing your own food is less environmentally harmful because the food does not have to travel as far.

In 2014, 56 students at Albert Park College were surveyed on their views and opinions around eating locally grown food. The respondents were aged between 12-17 and were males and females. The purpose of the survey was to determine whether young people are aware of the impacts of producing food, and what they are willing to do to decrease the impact. 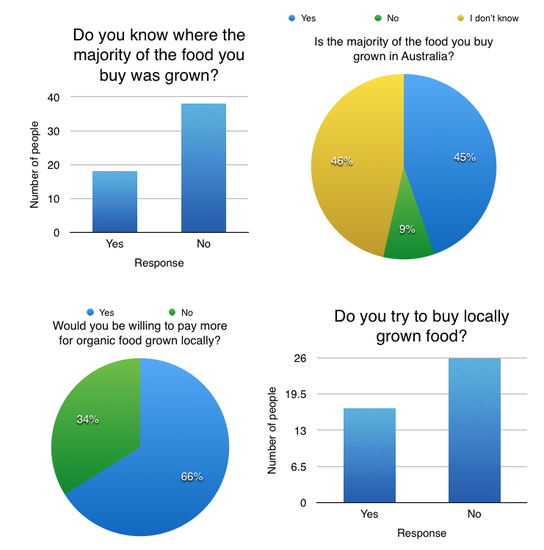 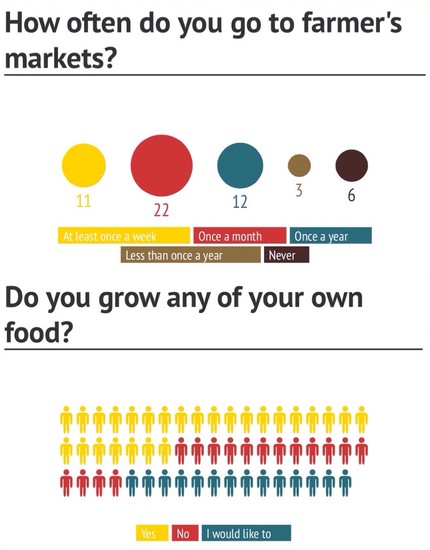 A survey conducted in the United States also found that consumers prefer locally grown food. Consumers were offered two baskets of strawberries under different price, farm location and farm type, asking which they would prefer to buy. The researchers found that local production made the biggest difference when deciding which they prefer. Many shoppers were willing to pay more for strawberries that were produced on small farms using sustainable practices (2).

26 students grow their own food and 22 go to a farmer's market once a month. This shows that approximately half of the students are trying to consume food that is organic and reduce their carbon footprint.

By conducting the survey it was also found that 10 students completely support locavorism, grown some of their own food and always buy locally grown food when possible. However 12 students do not know what locavorism is. While some students are educated on the affects importing food has on the environment, a lot of students have not been informed of the impact it has. This may be the reason that not all students try to buy local food.

10 students surveyed would like to be a locavore, but do not have the time or money. The reasoning for this may be that it is difficult to find food grown in Australia in supermarkets. The food may be too expensive or they do not have enough time to grow their own food.

However a Marketplace article argues that locavorism has a negative impact. Pierre Desrochers, the author of the article, states that "locavorism would not only mean lower standards of living and shorter life expectancies, but also increased environmental damage" (4). According to the article, the price of food would increase and their would be less variation. The amount of energy used to grow food locally is more harmful than transporting food across a long distance. Growing food locally does not increase food security because no local food system can be completely protected from natural damage.

Overall, it is difficult to determine whether students should be encouraged to consume locally grown food. However we should encourage them to buy food from farmers they can trust.

In conclusion, there is no clear indicator that students support locavorism or not. While some are knowledgable of locavorism, there are also many who do not know a lot about it. However most students are aware that the food we eat affects the environment in some way.

Based on research, buying locally grown food has both positive and negative impacts. Instead of changing the way food is transported, we may need to focus on how it is produced. Introducing sustainable practices on more farms may minimise the damage caused by producing food.

In the future, the same survey could be given to adults to investigate their opinions and knowledge on locally grown food. Another survey could also be conducted asking respondents questions about what locavorism is specifically. This would allow us to discover if people know the affects of importing food.