Judaism started when the Prophet Mohammed was asked by his god to move to Canaan to start a religion. The followers of Muhammad and Judaism are called Jews. Jews are Monotheistic like Muslims and Christians since they all believe in just one god, but Jews believe in the god Jahova, and they worship him in Synagogues. The services can be lead by any kid above the age of 13 once they pass Bar Mitzvah, which is the age when they have to lead a synagogue service. Jews also take a day of rest during the Sabbath which is a day of rest or prayer that lasts from Friday evening to Saturday evening. Their holy book is called the Torah, and their holy city , like the Muslims and the Christians, is Jerusalem. Some Jewish traditions are Hanukkah, and Yom Kippur. The Jewish symbol is called The Star of David, and it looks like 2 triangles facing opposite ways and overlapping on top of each other. 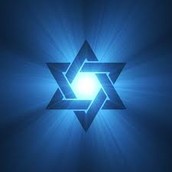 The Jewish symbol known as the "Star of David"

A man leads the service at a synagogue

The Western Wall in Jerusalem is a symbol of Judaism in their holy city of Jerusalem, Israel 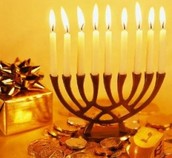