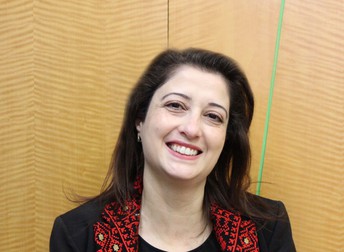 April signifies the return from Spring Break with anticipation for many momentous events. We are excited for the return of some annual favorites including our Spring Musical, Shrek, with performances later this month. Also, proud to share that our Wind Symphony has been selected to the Super State Band Festival at the University of Illinois in May. Furthermore, our Spring sports are in full swing, looking very promising for title wins, and eager for outside competitions.

Another highlight in April is our celebration of Autism Acceptance, Arab American Heritage and Earth Day. Stay tuned for activities and events planned for the month. We also acknowledge that April is a holy month for Christians, Hindus, Jews, Muslims and Sikhs observing in fasts and reflection. For those observing, we will support, celebrate and are interested in learning about our students' commitment to faith, family and tradition.

For our upperclassmen, Prom is another April event generating anticipation and excitement. This year’s Prom will be held at the Mid America Club on top of the Aon Building in downtown Chicago on April 29th. Our sponsors and staff are working diligently to organize a beautiful evening with a positive experience for all.

For underclassmen, April 13th & 14th marks the PSAT/SAT and ISA state exams. These tests are helpful to our T-Bolts in guiding them in important academic decisions regarding preparation for post-secondary choices. We wish our T-Bolts the best of luck on testing days.

Speaking of our underclassmen, our incoming Class of 2026 will finally be here at VJA on April 6th for our 8th Grade Open House. We can not wait to see our future T-Bolts!

We have much to celebrate at VJA. I am extremely proud of our community and the daily support you provide to our students and staff.

For thoughts, suggestions, and questions, please do not hesitate to contact me at 342-5810 or aothman@d230.org 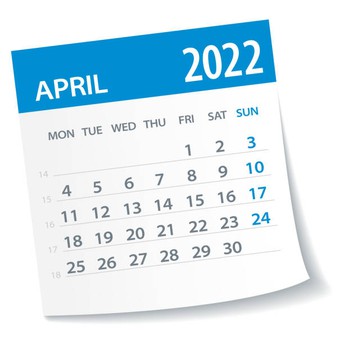 April 13: SAT Test for Juniors, PSAT 10 Test for Sophomores; No Classes for Freshmen and Seniors

April 14: PSAT 9 Test for Freshmen, ISA Test for Juniors; No Classes for Sophomores and Seniors

The Class of 2022 received a packet of details including all things Senior Celebration in the past weeks. Students, keep up your academic focus, get excited for the future, and remember to visit Guidance for additional support and to finalize your future plans! All details regarding senior check-out, final transcripts, and tips for finishing strong can be found in your Class of 2022 Guidance Google Classroom!

Class of 2023 students are in the process of meeting with their counselors individually for their Junior planning meeting. The focus of these meets is to discuss with students their future focus, explore resources to support them in their planning, and get prepared for senior year. School Counselors will be meeting with all Juniors during their math courses at the end of the month to dive further into the amazing exploration and planning tools in SchooLinks. And don't forget, sign-up in SchooLinks for our April college panel visits!

Class of 2024 & 2025, Do you want to learn more about college? You're in luck - College Panels are back! Sign up for these awesome opportunities in SchooLinks to learn more about colleges and to plan for your future. Click here to see our April visits! Each panel will include representatives from four different colleges. The panel will start with a Q&A session where college representatives will answer questions from our students. It will end with a mini-college fair, where students will have the chance to stop by tables from each college and pick up information or ask more specific questions.

Class of 2026 Open House will be hosted on April 6th. This is an opportunity for students and families to tour the campus, meet teachers and administrators to learn more about academic courses and resources, and get excited to get involved as they meet all of our activity sponsors and athletic coaches. The event will be open from 5-7pm. There is no formal presentation, so please arrive at the time that is best for you and your family! See the Class of 2026 Guidance Page for up to date details!

The VJA Orchesis club has been meeting for open dance studio time. We open our dance sessions to anyone that would be interested in participating in Orchesis next school year, or just wants to learn a little more about dance. Stop by and talk to Ms. Gongol if you have any questions. Our next scheduled times to meet are Wednesday, April 6, and Wednesday, April 27, at 3:15 pm in the dance studio - we'd love for you to join us!

Our Restorative Circles organization continues to make an impact and as a result, was recognized by our School Board on March 31st. Their commitment, as student leaders, to bringing our school and community together through various efforts has been amazing.

Please feel free to come out and support our Spring performances:

April 2nd is World Autism Awareness Day. The day recognizes and spreads awareness for the rights of people with Autism. The condition typically starts during childhood and continues into adulthood. Autism Spectrum Disorder is a developmental disorder that affects a person’s behavior and communication and can impact a person’s ability to navigate social interactions and also causes repetitive and restricted behavior. World Autism Awareness Day was set to April 2 of each year and was adopted on December 18th, 2007 to encourage all states to take action in raising awareness about people with Autism Spectrum Disorder and support the research in finding new ways to improve wellness and inclusion.

At VJA this year, we will be focusing on Autism acceptance as well as awareness by encouraging staff and students to participate in a variety of activities throughout the month of April. We encourage our community to participate in any way possible as well.

Since World Autism Awareness Day falls on Saturday, April 2nd we will encourage all students and staff to wear blue (the official color to honor Autism Awareness) on Monday April 4th. We will have various students diagnosed with Autism give a fact about Autism awareness during the first week in April. We will also provide ribbons to staff to be worn during the month of April, the Media Center will display books about Autism, T-shirts about Autism acceptance will be created and sold to staff by our Social Communication Group, posters will be created by students in Resource and displayed around the building to raise awareness, and our PALS students will put up blue ribbons on the trees around the building.

Our next Booster Club Meeting is Wednesday, April 13, 2022, at 7 p.m. in Room 220. All Spring Team Reps, please arrive at 6:30 p.m. for an informational meeting beforehand. If you are interested in becoming a part of this great club, come to the meeting.

If you need information regarding spiritwear pick up, or would like to buy some of our stock, please contact our spiritwear director Peggy at andrewhsspiritwear@gmail.com.

We would like to welcome all of our Spring team reps! Thank you for volunteering and as a token of our appreciation we will be handing out T-Shirts to the Spring Team reps at the April meeting. If you were a fall team rep and want to continue being involved, please come to the next meeting on April 13, 2022. We are starting to look at future director positions for next year, so please consider a position. You can donate as much time as your schedule will allow. We can only be successful because of the parent volunteers! Please contact Lesley at lesmag1@comcast.net if you would like to be a part of this great group of parents! 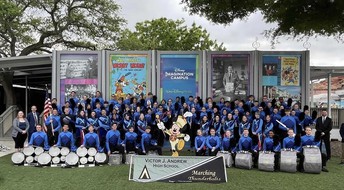 The VJA Winter Guard and Winter Percussion groups are nearing the end of their winter seasons. Both groups have had wonderful seasons so far. Some highlights include top finishes at numerous competitions for Percussion and the Winter Guard. Both groups will wrap up their seasons in April with trips to WGI World Championships in Dayton, Ohio.

The music students had a fantastic trip to Walt Disney World where band, guard and chorus students had a chance to perform, as well as enjoy some fun in the sun. Highlights included marching thru Magic Kingdom, performing on stage for visitors at Disney Springs and the chance to participate in workshops performing Disney music and seeing the behind-the-scenes magic of adding music to Disney films.

The Spring Craft Show was a great success with lots of great crafters and vendors in attendance. A huge thank you to all of our VJA student volunteers (both music and non-music students). You make this event the success it is!

A big shout out to our Incendio Saxophone Trio, which is comprised of two VJA students, Alex Procajlo and Zach Solomon, and one Sandburg student, Emma Phillips. The trio traveled to Austin, Texas, and competed in the Coltman Chamber Music Competition. The trio advanced to the finals! They also have been selected as quarterfinalist in the premier chamber competition, Fischoff. They will be competing at Fischoff at the University of Notre Dame on May 20th. Good luck to these amazing musicians!

Last but certainly not least, we have the Spring Musical, Shrek, coming in April. Performances will be Thursday and Friday, April 21-22, at 7 pm, and Saturday, April 23, at 3 pm. Save the date for this amazing show put on by the talented student musicians, singers and actors of VJA.

As always, we’d love to see you at our Andrew Music Parent meetings where you can keep up to date on all the news from the music department. Our final regular meeting of the school year will be Tuesday, April 26, at 7:30 pm in the choir room.

Thank you and Eyes with Pride!!

Spring has sprung finally, although we are still having chilly weather, we are almost at the end of the school year! Look for the Thunderbolt Pride Parent Organization table that will be set up at some of the future Athletic home sporting events in the month of April. TPPO will have some tasty snacks and drinks!

Students will be preparing for there big final exams soon. It is important that not only students prepare thoroughly, but that they need to stay positive and at ease during these exams. So that is why TPPO is going to be selling Final Exam Survival Kits for students in the upcoming month of May. Parents, please be on a look out for more information regarding these so you have them in time; allowing your student to do their best.

Also in the month of May, TPPO will be selling some delicious food and treats at Andrew Fest, so be sure to stop by! Please be on the lookout for more information regarding this as well. Both of these May Fundraisers we will be needing volunteers from Parents and Students, so please don’t hesitate to reach out for more detailed information, or if you have any questions, by emailing Kristin Michalec at kristin1201@outlook.com. Students may also stop by the Community Service office for more information on these dates and times.

Impact your child's success by becoming a member of the Thunderbolt Pride Parent Organization for just $10.00, if you have not already joined! 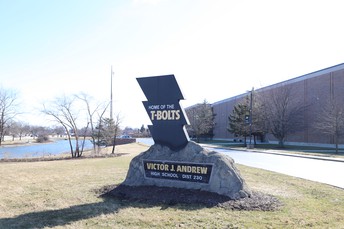 Follow Mary Bray
Contact Mary Bray
Embed code is for website/blog and not email. To embed your newsletter in a Mass Notification System, click HERE to see how or reach out to support@smore.com
close