Get email updates from Makayla: 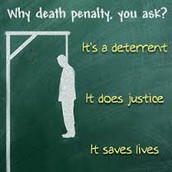 I believe that the death penalty is acceptible

I think the death penalty is acceptable because if you kill someone you deserve to be killed, an eye for an eye. It is even stated in the bible, "You have heard that it was said, 'Eye for eye, and tooth for tooth.' -Matthew 5:38

Another reason it is acceptable because it costs $168,000 to house ONE inmate per year, multiply that by a lifetime! I wouldn't want to use my hard-earned money on taxes to take care of a MURDERER. The cost of a single lethal vaccine costs $86.08.

My next reason is that if we let murderers out they have a chance to kill again. Even if it is a life sentence they can still kill people in the prison. There is a 37% rise of this happening since 2011.

The last reason is that the threat of death penalty has decreased crime rates. A 2008 study shows that each execution decreased the murder rate by 14 people annually.

Although some people say the lethal injection is immoral, I believe that not taking their life is immoral. If we as a society let someone live who has killed an innocent human being, then the society is really the immoral one. The death penalty is really honoring and avenging the person who was murdered.

Some people not supporting the death penalty may say that people are wrongly accused. Although that is true, DNA and Crime investigators have new technology every day to better prove if someone is, in fact, guilty. Another thing to remember to make sure that there are no errors is that the jury must unanimously come to the verdict that the person is guilty.