Dunedin Chamber of Commerce invited Chinese from the Victoria Goldfields in Australia to the Central Otago Goldfields. This happened when the European miners left to the West Coast Goldfields and the Chinese were chosen because they were thought as hardworking and inoffensive. In 1869,over 2,000 Chinese had arrived in New Zealand. Most immigrants came from areas around Guangzhou. It was rare for the Chinese woman to migrate and the genders were greatly unbalanced. 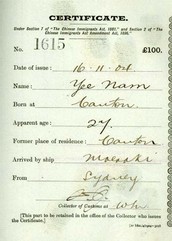 When the Chinese first arrived, the government increased the Chinese tax outrageously and it was clear that the New Zealanders resented the Chinese immigrants. The reason for the increase of tax was to drive the Chinese out of New Zealand and keep them out. The poll tax had been £10 but gradually, because of the larger tax, in 1904, the poll tax was £100!

The New Zealanders finally started to accept Chinese in World War II, when the Chinese fought with Japan and the Chinese women and children were allowed to come to New Zealand. As the Chinese families grew in New Zealand, many communities formed.

The Chinese communities mainly consisted of men before World War II because most could not afford the 100 tax for their families to come and live in New Zealand. Most men would just have to visit their families once a year. However, some men would send for their brothers, sons or nephews who would then work in New Zealand and sometimes marry a European woman.

Some of these laws were:

After 1907, all Chinese arrivals had to sit an English test to determine whether they were allowed in.

In 1908, the admittance of Chinese immigrants was stopped and didn't continue until 1952.

In 1926, permanent residency for Chinese was denied. 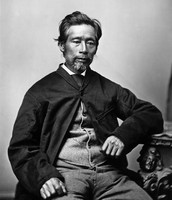 Appo Hocton was born on 18 August 1819 in China. He worked on English ships and left China when he was 9 as a cabin-boy or stewart. He first arrived in Nelson on an immigration ship called Thomas Harrison as a stewart on 25 October 1842. He abandoned the ship and as a result, he was sentenced to 20 days in prison while his ship departed without him. 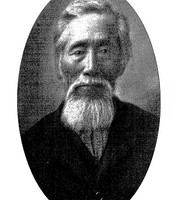 In 1849, he rented a one acre area which included a cottage, barn and 10 cattle. Appo was hard-working and thrived in business and he applied to be admitted as a citizen in New Zealand but as a foreigner, he wasn't allowed. Alfred Domett, a colonial secretary in the South Island, noticed that Appo was hard-working and well known while Alfred was in Nelson. After that, Appo's application was accepted. In 1852, he acquired a 3 acre sized area near Washington Valley in an auction. He also built a home for himself on some land he bought near the tideway.

Why do Chinese move to New Zealand?