The new deal was a progressive movement that was for the United States Great Depression. This movement was delving by the democratic party while Franklin D Roosevelt. Its to help with economic recovery and social reform.

Programs During the New Deal

CWA: Civil Works Administration was created during 1933 to create jobs for the unemployed. its main focus was to give high paying jobs in the construction areas, but the federal government put to much spending into the program so it was removed in 1934.

FSA: Federal Security Agency was created in 1939 to serve several important responsibilities for government entitles . it was abolished in 1953, it administrated social security , federal education funding, food and drug safety

WPA: Works Progress Administration was created in 1935. It was the biggest New Deal agency. The WPA impacted millions of people. it provided numerous of jobs across America. Because of this more roads, buildings and new projects were created. in 1939 it was renamed Works Projects Administration but it also ended in 1943

Actions That Took Place During the New Deal

Congress passed this act to release millions of dollars to states; one of the fourth national workforce to obtain jobs

Legacies of The New Deal

Many people think that the New Deal ended the depression. It did not. It insured americans with economic security which is something american did not have before.

At the peak of the Great Depression, Franklin D. Roosevelt delivered his first inaugural address at Washington's Capitol Plaza and assured Americans that he would "Wage a war against the emergency." The speech he gave gave Americans gave them the confidence that they had elected a man they could put trust in, A man who wasn't afraid to make bold decisions to help his nation's issues. Throughout the Great Depression, the unemployment rates were continuing to increase and people were growing more and more desperate and angry, so FDR put together the WPA. The WPA was to provide jobs for the unemployed. Main focus, was construction, then to a lot of the fine art industries. The WPA project from there influenced more projects to be made to increase the opportunities for people to find work again. The New Deal projects bound them all together through programs, policies, social security, unemployment insurance, and federal agriculture subsides, which is all still with us to today. 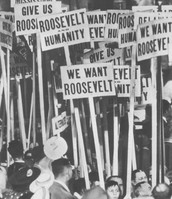 Voting for the machines in the straw ballot