Get email updates from United:

This month our literature groups read and discussed the novels The Giver, First Light, and City of Ember. The novels contained themes about societies and their connections with their social and physical environments. The students will write character and thematic essays about the novels. They read and recorded their vignettes completed last month and shared the audio with their parents. After reading several mentor texts, the students began writing their own personal narratives using the writing process of drafting, revising, and editing to produce final products. Mini-lessons covered how to create effective leads, pacing, description, and the use of dialogue.

To kick off the Industrial Revolution study, we visited The National Museum of Industrial History in Bethlehem. We learned the history of technology and inventions that shaped America. The students learned about the transformation from foot-powered machine to steam power, the making of iron and steel, textile and silk manufacturing, and propane as an energy source. They participated in a workshop about early inventors and inventions and enjoyed the activities and shared their information with their peers. Through class lectures, nonfiction reading, primary documents, and videos the students learned about the beginning of the Industrial Revolution in Britain. Our essential questions this month were What is industrialism and the industrial revolution? What are the necessary factors required for industrialism to happen? When and why did industrialism happen in Great Britain? What were the major technological inventions of the industrial revolution? Who were their inventors? How did industrialism affect population growth and migration? How did industrialism spread from Britain?

The students began a simulation activity about the process and impact of the haphazard urban planning that took place in Britain during the Industrial Revolution. The 6th, 7th, and 8th graders also prepared for student-led parent-teacher conferences. They organized binders, located evidence of work, and reflected on their learning strengths and areas needed for improvement.

During October in Math 6, students followed the Chapter sequence in the CPM program. This included Chapter 2, which focused on visualizing and displaying data. Students will collect data about their estimates of 60 seconds and then investigate and compare the strengths and weaknesses of various methods for displaying their data. The second section of the Chapter focused on area. Students learn that area is measured by counting the number of square units that cover a region. As with linear measure, these units must be repeated with no gaps or overlaps. Students also explore conservation of area (when a shape is cut into pieces and they are moved around the total area does not change) and determine whether a relationship exists between the area and perimeter of a figure. After using multiplication to find the area of a rectangle, students use rectangles as a tool for multiplication. Generic rectangles are introduced as a way to calculate large products mentally or on paper. Students also use generic rectangles to find greatest common factors. This work will later be formally related to the Distributive Property in Chapter 3. Students’ understandings of area and using area models to multiply integers will be expanded to include multiplying fractions, decimals, and mixed numbers in Chapter 3. Additionally, the model of a generic rectangle is an excellent visual resource for various computations that will be performed in pre-algebra and algebraic contexts. In Chapter 5 students, will learn about area of triangles and quadrilaterals and in Chapter 9 they will explore and volume and surface area.

The Common Core State Standards that were emphasized in Chapter 2 include Practice 4: Modeling with mathematics and Practice 5: Using appropriate tools strategically.

Pre-algebra – During October, we have continued our work on converting fractions to decimals, as well as understanding the difference between terminating and repeating decimals. (Interesting fact – if a fraction is simplified, it will be terminating if the denominator only has prime factors of 2 or 5. Otherwise it will be a repeating decimal.) We have also begun to develop a working understanding of positive and negative numbers and how they interact, using the idea of an acrobat moving on a high wire. On a different track, students have been working with areas and perimeters of polygons, becoming more fluent in “thinking in shapes and sizes” as well as inferring spatial information from partial evidence. We continue to work on logical and mathematical puzzles, as well, which has included learning to fool around with summation and factorials, which helps to develop fluency and comfort in numerical thinking.

This month in Physical Science, students continued to apply what they learned about energy and force to various applications of physical laws. They were also introduced to several basic physics formulas for calculating essential physical quantities including distance, speed, and time. The main projects in which these concepts were applied were in a paper airplane investigation and another using pendulums. Students chose a design, built the plane, and used a multiple-trial format for making measurements and calculating the average velocity of the plane. They also tested the effect of increasing the mass of the plane on flight time. Throughout the investigation process, students use the scientific method of asserting a hypothesis and finding empirical evidence that confirms or conflicts with their assertion. They look for sources of error in their experiments and have been taught various types of experimental error.

In another investigation, students explored pendulums, again with the goal of measuring average velocity. Pendulums were also a doorway to explore simple harmonic motion, any recurring cyclical motion that occurs within a predictable timeframe. Students also tested the effect of an increased mass on the period of a pendulum. Both investigations present in-depth opportunities for bridging connections between science concepts and mathematical calculations, which have also been reinforced through individual and group problem sets in class. 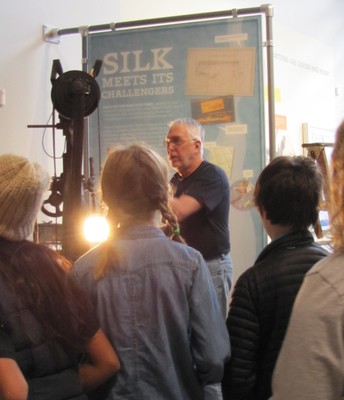 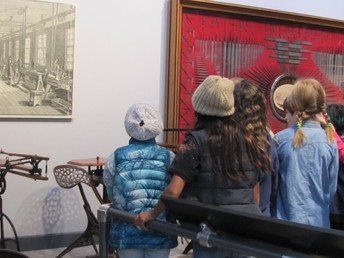