By Emma Lyons and Jaylin Reisdorf

By Emma Lyons and Jaylin Reisdorf 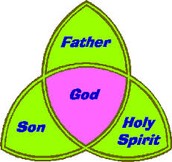 Although christians are a minority in the middle east today, more than 75% of Americans of Arab are descent of christian.