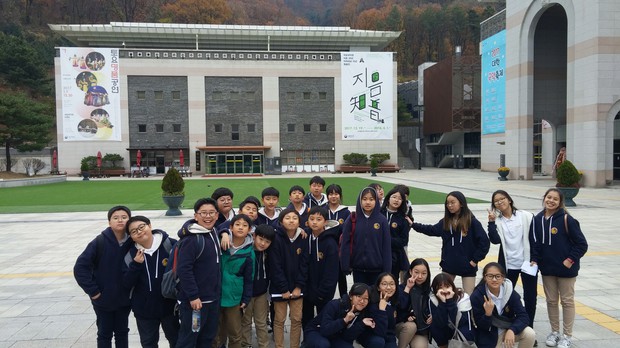 It was an exciting and active week at CDS Middle School. On Tuesday, students gathered in the Small Theater to hear teachers share their Co-curricular offerings for the winter season. On Wednesday, several of our Science Fair participants engaged audience members with their curiosity and critical thinking skills.

Some groups gave formal presentations in Dalton Hall, while others created posters and presented their work to small groups of students and teachers during Lab time. Be sure to check out the slideshow and photos further on in the newsletter. We extend a special thanks to the Science department for making this event a success. The week ended with a 6th grade field trip to the Gugak Arts Center in Seoul with Ms. Van Liew and Mrs. Hinds.

Next week is a short week due to Thanksgiving break. On Thursday 11/23, students will attend class in the morning, have lunch and then enjoy some Thanksgiving themed House activities before being dismissed. Buses will depart CDS at 1:00pm. 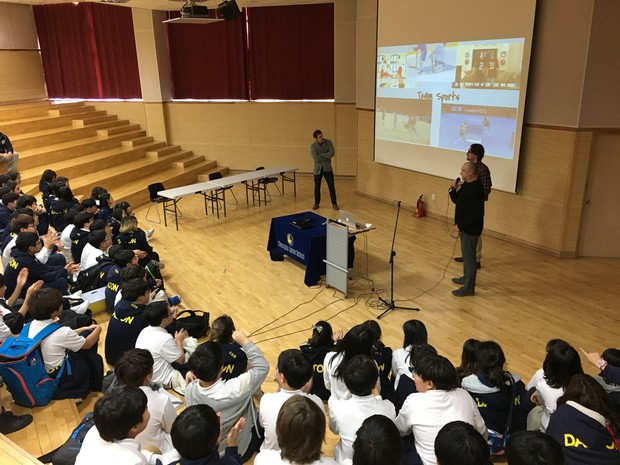 Students will have the opportunity to sign up for Winter Co-curricular Clubs on Saturday morning (11/18) at exactly 10:00am. Please visit the CDS Middle School website for the sign up form. Space is limited in certain clubs, so please be up and ready!

* The Swimming team will be competing at KIS on Saturday morning, so it's important that parents log on to the CDS Middle School website and sign up on behalf of their students to ensure they get into their first choice club. 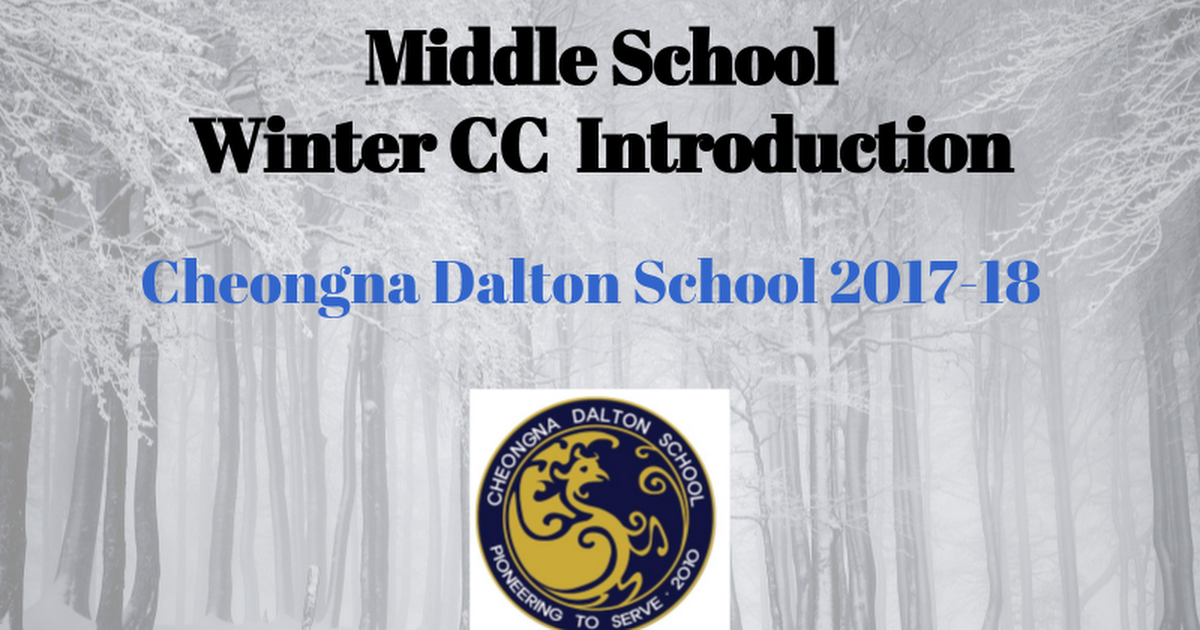 CDS will offer the same After School Programs for the Winter season. Please see the slideshow below for more details or visit the CDS Middle School website. Winter ASPs will begin On Monday, August 27th.

The ASP Sign-up form will close on Sunday, November 19th at 4pm, so please speak with your children as soon as possible. Please be sure to consider overlap with KAIAC athletic seasons when making your decisions. 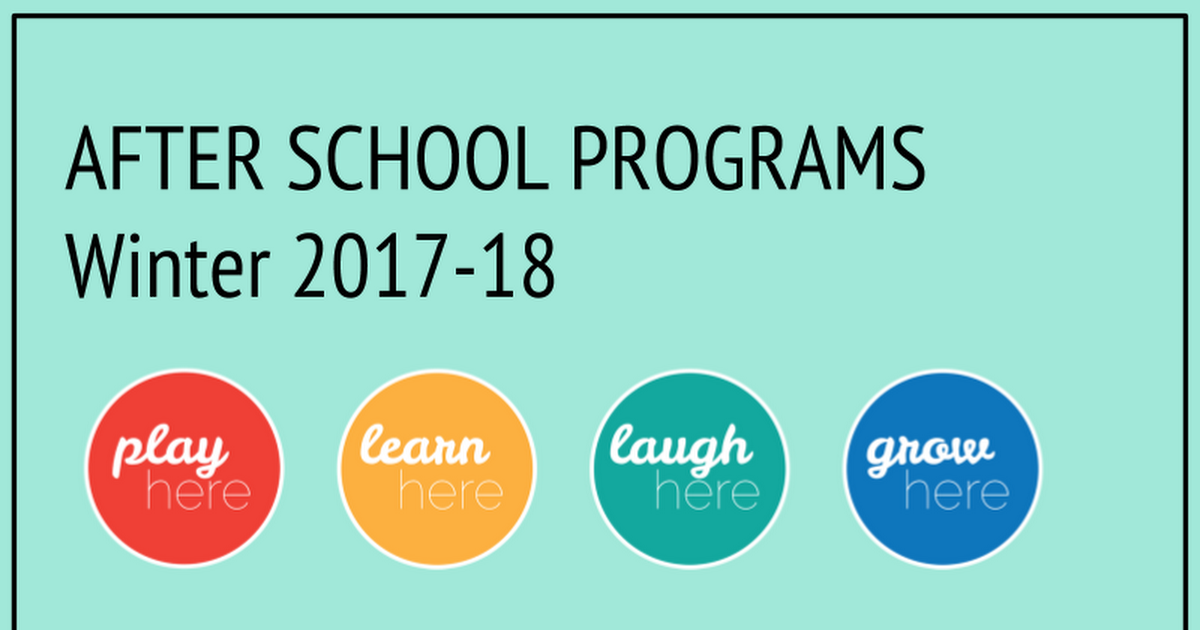 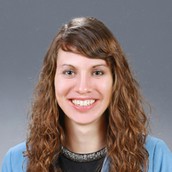 The 6th graders were an excited and eager bunch as we loaded the bus on Friday morning to go to the Gugak Arts Center in Seoul. We were lucky to get to the Gugak a little early, so the students had some extra time to initially wander through the traditional music museum.

Then, the students participated in a Janggu (two-sided hourglass drum) class with a professional Janggu player. In regards to the class, one student said, “One of the coolest parts of today was doing/learning Janggu. Learning from a professional really did help my understanding on Janggu. I figured out that Janggu is made out of many materials.” Other students said that the Janggu lesson “was very exciting” and, “I enjoyed because I like music and it was fun.”

After the class, we were reenergized with a Korean meal and then headed back to the museum. This time, the students had a bit more time to explore, look at the displays, and even try out the instruments that are set out for people to play. One student commented, “I enjoyed the museum because it was fun to listen to the Korean traditional instruments”. Overall, the students were active and curious about what they heard and saw.

We are all very thankful for the opportunity to go to the Gugak Arts Center and learn more about the traditional music of Korea! 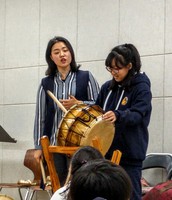 The Student Council has been working hard over the last 7 weeks to offer morning news that is both entertaining and informative. We're impressed with the progress we've seen so far and very happy with their positive contribution to our middle school community. Check out SCBS News #7 below.
SCBS News #7 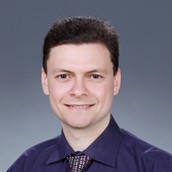 Last Wednesday we held the long awaited CDS annual science fair in Dalton Hall. It was a momentous event which demonstrated the values of our school as stated in the 6 C’s. Community and collaboration were on display in the posters and presentations which required much teamwork. Creativity and critical thinking were evident in the exceptional experiments and scientific inquiries.

The event actually began during lab time as students set up their posters in eager anticipation of visits from the judges and their peers. The posters exhibited complex scientific experiments in a highly visual and easy-to-understand manner. Students explained highlights of their experiments to passing students and answered teachers’ questions.

During CC time students stepped on stage at Dalton Hall and bravely presented their scientific endeavors in front of an audience of their peers. It was exciting to see so many students interested in science and to view the audience’s reactions to the many great displays. From home-made holographic projectors to examples of crystallization in action, the power and intrigue of science was made plain for all to see.

Every participant in this year’s science fair should feel a deep sense of pride and accomplishment in their hard work and achievement, regardless of the outcome. It’s not easy to take a risk and do something new, but the participants demonstrated a bold and adventurous spirit which we should all admire and seek to emulate. 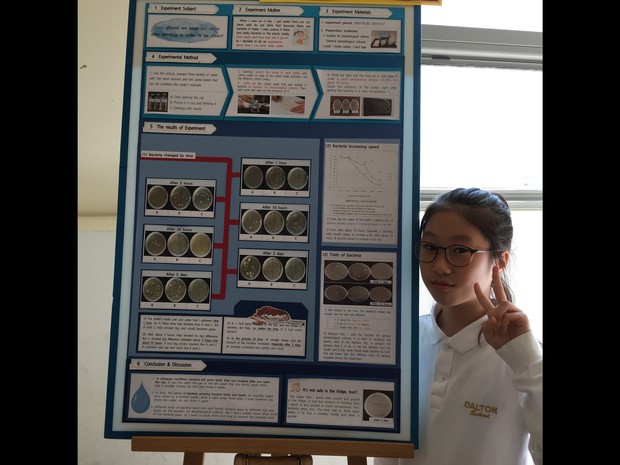 "This year, was my first year of the CDS Middle school and I wanted to participate in Science Fair because I like Science.

My project was about Bacteria growing in a plastic bottle. I experienced how much would the bacteria grow in three different condition. In all bottles, a lot of bacteria grew, so all bottles were not clean. I was happy to learn this. But also kind of sad because I only presented to the teachers, not the students. I saw students drinking water from the bottle, and I wanted to tell them that the water’s not clean. The start was a little rough but at last I think it was pretty good. I was happy to experience this and tell this to the teachers to drink clean water.

Lena Chang’s project impressed me because not like the original screen, it was 3D. The screen was flat but after Lena placed the 3D screen, the cat seemed to walk and stand up. It was very interesting!!

I really enjoyed this year’s Science Fair and had a lot of fun. I would really like to participate Science Fair next year too!" 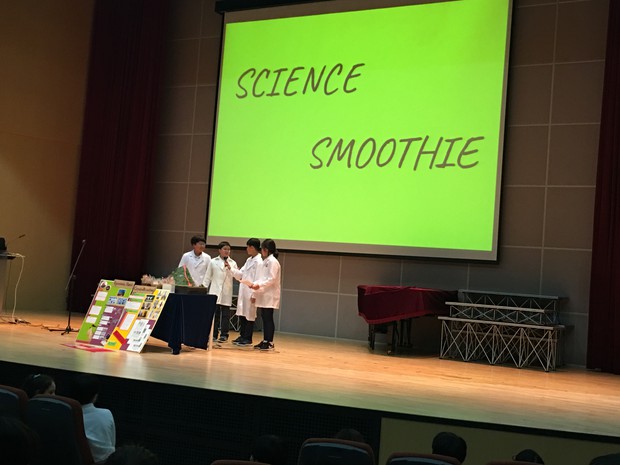 As everyone knows, our project was about crystallization/rock candy. I think our group struggled the most out of all groups. We had to start the works over and over again, due to topic changes.

Our first choice wasn’t actually crystallization. The original topic was alternative energy, however, one of our group member suggested to to hydrogen bombs instead because the topic “Alternative Energy” was too boring. The problem about the restarting was that we already had all the writing done and it took 1 week, so basically we wasted a week and effort on that. After that, we started the second choice, hydrogen bombs. Later on, we had to restart again because we couldn’t just explode a bomb in the middle of a presentation (Also, Mr. Howell suggested us to do something else). Our final choice was, of course, crystallization. We decided to stay on this topic because, well, it was interesting and the experiment was quite fun to do.

If you ask me what our group could have done better, I would say the slide. Our group conveyed all the experiment process, experiment results, and all the other good things by talking, but I don’t even think the audience even payed attention and got any information from the speech (although it was the things that was already taught). Perhaps, if the presentation and the talking met some balance, the audience still would have picked up something from those two. No matter if they knew or not.

In fact, there was a presentation I was impressed with. I don’t know about the other group members, but the presentation about crystallization. The other team of course. Despite the same topic of ours, I think that team explained something what our team did, digging deeper down than the basics. Also, their experiments really caught my attentions. I would have never thought that a team would have used real chemicals.

Our group’s collaboration was absolutely great. We had neither a fight nor an argument. Not even a small one. We went very smoothly and thanks to our group leader, our tasks were clear and we were able to finish everything in time, despite the previous “waste of time”.

This was a great event. I really want to do it next year too. Standing on stage was very nervous, but the applause and high spirits from others were great to hear, whether or not they were from our competitors or audiences. In addition, I had a fun time doing this project with my group. Sorry for writing this so long, but if you are still reading this, I’ll just say one more thing. This was one of the best events I’ve participated in my school life! 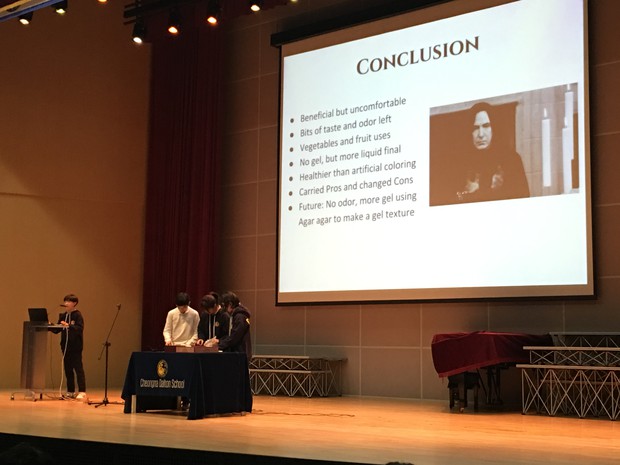 Our project was about natural food coloring and I think it went okay as it was about food and food engages everyone. If I had another chance, I would definitely dig deeper in the experiment and prepare for a better and more professional food coloring, with a gel texture. I feel no regret on spending all of the time and money on this year’s Science Fair because I learned so much. I was surprisingly impressed by grade 5 Scott’s project on candles. Our team collaborated very well throughout and I would like to tell everyone to actually try out the Science Fair, since we learn a lot and we can also get money! 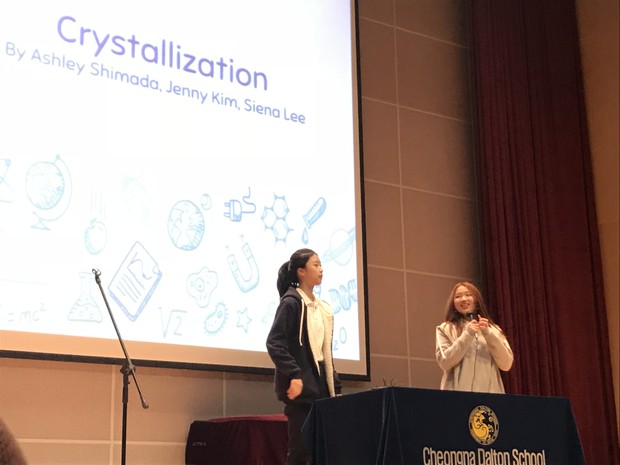 Our group’s project was based on the crystallization of different solutions. Although our group went through several trials and errors, we were satisfied with our final product and our presentation. However, if we were to do this again, we wouldn’t have procrastinated, and would have planned ahead so that we weren’t finishing the project few days before the science fair. Despite all the challenges we had, we think that participating in the science fair required a lot of courage, creativity, and grit. As an 8th grader, we think that this was a valuable and a memorable experience. 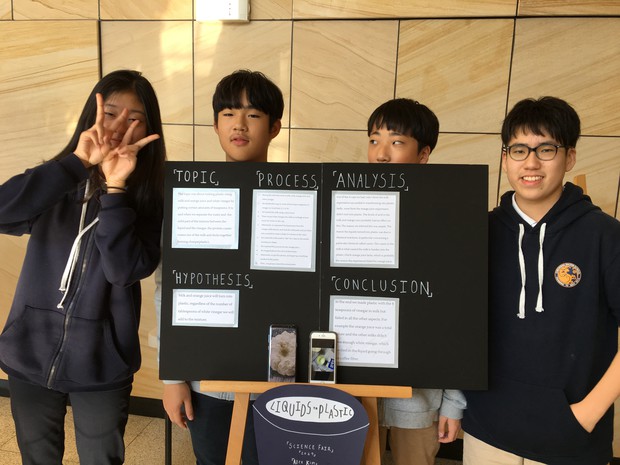 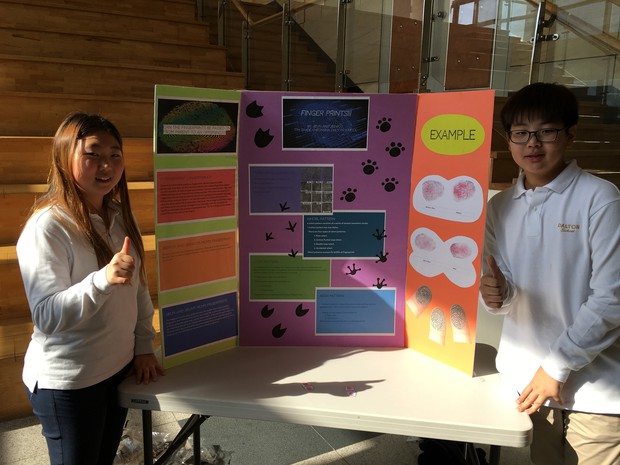 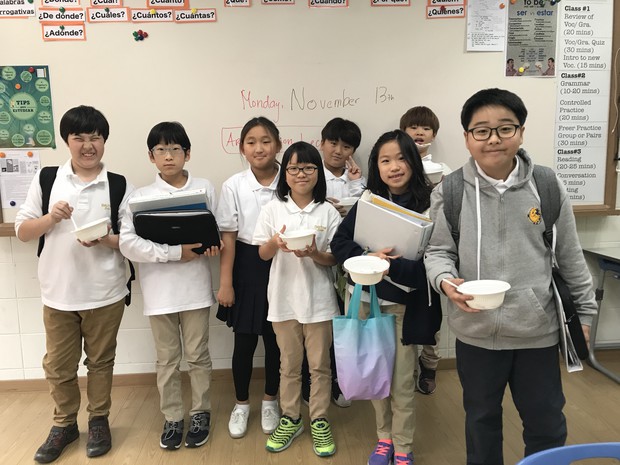 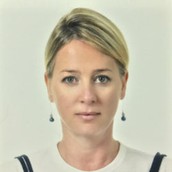 This week MS Spanish beginner classes started the week with tasting Arroz con Leche, a special dessert that made its way all the was from Spain to Latin America. It is basically made from rice with milk, sugar and Cinnamon, which students seemed to enjoy.

"This was very tasty, and it had a lot of cinnamon. It kinda tasted like liquid cinnamon rolls in milk."

"The Rice with Milk and Cinnamon was really nice. It was soft and sweet, which I really liked."