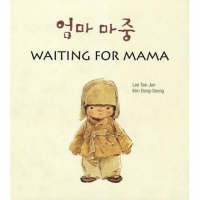 Information about the book

Topic/Theme: the universal theme of hope and family life for the Korean culture

Lee Tae-Jun was born in 1904 and was just 21 years old when he published his first work. He worked as an author until his death in 1956. Lee Tae-Jun is still recognized as Korea's most beloved authors, today. His writing for the story, Waiting for Mama, was first published in a newspaper in 1938.

Kim Dong-Seong was born in 1970 and graduated from Hong-ik University, Seoul, with a major in Oriental Painting. In, Waiting for Mama, he made his illustrations so authentic, so real, that this story is most powerful when published as a bilingual edition that respects and honors those traditions. He really captures the culture and time period of the story and illustrates the people and scenery as they would have looked in 1938. Even today, in Seoul, you can still see people dressed in these traditional clothes as pictured in Waiting for Mama.

In his interview with LIST Magazine, Kim says he was influnced by these two men. Their philosophy and attitudes as artists are what inspired him. http://spe.list.or.kr/articles/article_view.htm?Div1=23&Idx=804

Illustrator of many picture books, including, Waiting for Mama

An Illustration from the book

2.RL.7:Use information gained from the illustrations and words in a print or digital text to demonstrate understanding of its characters, setting, or plot.

Objective: The students will be able to formulate meaning to the plot based on the illustrations from the book, Waiting for Mama.

Follow Kayla Yanik
Contact Kayla Yanik
Embed code is for website/blog and not email. To embed your newsletter in a Mass Notification System, click HERE to see how or reach out to support@smore.com
close