Ido is using Smore newsletters to spread the word online.

Get email updates from Ido:

Why it's so importent?

High jump improves the stability, speed and strength in the legs. It's an Olympic sport so you can be in the Olympic competition and make new records

It's special because you can jump in many different techniques like: western roll, scissors, straddle and fosbury flop. The technique that the most of the high jumpers use is the fosbury flop.

Javier Sotomayor from Cuba in 1993 set a world record of 2.45 meters in a Stadium.

Javier Sotomayor from Cuba in 1989 set a world record of 2.43 meters in an auditorium.

stefka kostadinova Bulgaria set in 1987 world record of 2.09 meters in a Stadium.

Kajsa Bergkvist Sweden in 2006 set a world record in 2.08 meters in an auditorium.

If you want to get high, jump high. 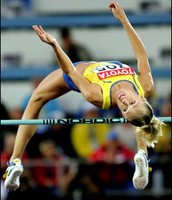 Ido is using Smore newsletters to spread the word online.