Get email updates from Kyla:

The story of her birth and the difficulties of her life.

The story of her birth and the difficulties of her life.

Rigoberta was born on January 9, 1959.She was raised in the Quiche branch of the Mayan Culture.In the early years she helped her family with farm work in the northern highlands where she lived at the time. Rigoberta became promitmit in the Woman&apos;s Rights movement when she was still a teenager.

Rigoberta Menchú was born to a poor indigenous family near Laj Chimel. Menchú received a primary-school education as a student at several Catholic boarding schools. After leaving school, she worked as an activist campaigning against human rights.

One of a kind woman to get so far by herself

The topographical composition of El Quiché is dominated by the central highlands and the mountain ranges of the Sierra de los Cuchumatanes, Sierra de Chuacus, and the foothills of the volcanic mountain range on the department's South-Western border with Chimaltenango. 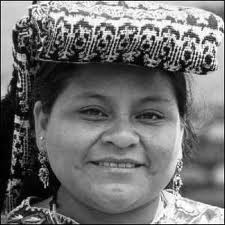 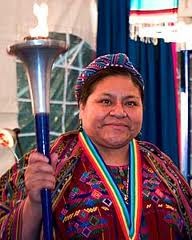