Next week, some of you will be getting Teacher Walkthrough schedules. This will be the first list. With the first 6 weeks behind us, we are all in full gear. We will not begin these until October 11th.

During these walkthroughs, you are looking for ideas to steal - and are also planning to reflect on the experience as a whole. So, there is homework.

Part of TTESS will be our ongoing PD. Remember, a growth model for all means growing all the time. We need to be more resourceful as a field in how we do Professional Development - there is a ton of it going on everyday on this campus - and it's FREE!

One thing all teachers know is that they are forever a student as well. Bring these experiences up with the kids - they should all know that learning never stops.

Also, our Planning Day will be October 7th - I will be sending out a list of expectations next week - most of them have to do with attentiveness to the process. Let's take advantage of this time. Also, Fair Day will be on October 10th - so, we are about to have a mini-Fall break.

This does not mean anything needs to change in the classroom. Homecoming week has enough going on with dress themes etc. We are all still hard at work. 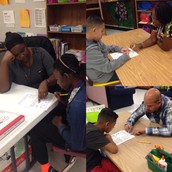 Loved how busy everyone was Monday morning - kids are improving everyday.

This was a great idea from 8th grade Science for ways to display their atoms. 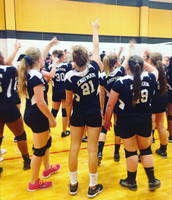 It was nice to finally have a home game - we are already nearly halfway done with the season which is incredibly hard to believe.

Kids are signing up - this was the best group (together) that has came from Nash - so let's remind them. 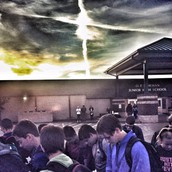 McNeely took this great pic when our kids were praying. 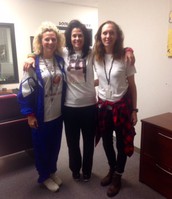 Lots of accuracy out there, y'all.

The kids had a blast and learned a ton. I had trouble with some of these. History is way harder than the way we learned it. 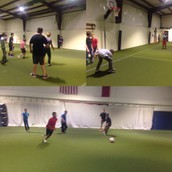 Busy until the bell - 20 minute run followed by games. We do actual P.E. here.

To me, this never went out of style.

October 3rd: Western Wear - Rope the Hornets (despite that being probably impossible)

October 8th: Mom and Son Nerf War in the Lair

When I was in 7th grade I got sent to the office because a friend gave me a keychain that was called “The Last Word”. It had a four-way button, each corner said a different curse phrase – two of the corners weren’t “big” curse words, but two of them had the F Bomb in them.

I don’t remember my 7th grade English teacher’s name because she wasn’t memorable, and I don’t remember her ever talking to us. She wasn’t unkind, or over-demanding, or anything a JH kid would just hate – she just didn’t care. What a legacy for her.

I do remember the voice of the guy that read “And Then There Were None” – which she would put on because she was bored with us and bored with her job, and probably bored with her life. I remember her leaving the room – and at Desoto East – there were doors in the front of the room and in the back, so that teachers could leave through the front – to do whatever – or through the back to talk to other teachers.

She left through the back.

I assumed she would be a while – as she always was.

So, in the middle of “And Then There Were None”, I added my own sound effects. Everyone laughed. I’d wait for a pause, and then hit a button. My timing was perfect.

Until, what’s her name walked back in (through the back door and, I guess, incredibly quietly) and was standing over me. I looked directly at her and hit a corner of the button – I think nervously.

It was a bad one, and at the end of a chapter – so, just JH crickets and gasps.

I went to the office and got a call home. I didn’t do it again.

I also never forgot the voice of the guy that narrated that book – I even looked for it on audible.

I still have no idea who taught me 7th grade English, but two years later I saw her on an escalator at Northpark (She was going down, and I was going up – this is back at the old good Northpark when they had an El Fenix and it wasn’t a maze) – I put up a “hello” with my hand and wanted to say a name but none came to mind. She made eye contact, but it was like she had no clue who I was and continued complaining at her kid a step below about something meaningless. She had no clue I was the kid that hit that button.

I actually dug through yearbooks to find her name – and it’s because she is a only a footnote to the story, so I won’t name her. If I think hard, I actually don’t remember who taught me anything in 7th grade – I do remember the voice that read “And Then There Were None”.

Y’all make sure they remember you.

They are supposed to.

Thanks to Cathy Chambers for Sharing: