Get email updates from Dawn:

Last Scoop before the Annual meeting

Last Scoop before the Annual meeting

The annual meeting of the Shiloh Farms HOA will be held at:

Please go to www.shilohfarmshoa.org for all previous Scoops and make reference to the Scoop titled Brass Tacks about voting for all voting related questions.

Here is a link to the proxy if you need to print another one out.

If attending via Zoom

The vote must be held at the meeting. If you cannot attend in person, please be sure to complete the proxy and email it to cneville@cmacommunities.com or give it to a board member, so we can ensure we have a quorum. Voting will not be allowed (enabled) by those who attend via Zoom, so please complete the proxy. Talking will not be enabled on the zoom link, however chat questions will be accepted.

If gates or single trash pass, when will the assessments begin?

If the gate or trash measure passes, the single trash fee will be included in the 2022 dues.

If the gate measure passes the special assessment and gate fee will be implemented with 2023 dues.

Consolidated Gates and Single Trash Q and A

We have created a consolidated document of all of the gates and single trash Q and A's. Please see link below. The document is 16 pages and can be printed out for the residents reference if desired.

Please send any further questions the Board before Thursday 2/3 at midnight and we will try to update the Q and A before the meeting.

This chart was created by Christy Louella, Shiloh Farms resident and real estate agent. This is simply a list of known HOA fees in the area and does not provide information on neighborhood size or amenities included. 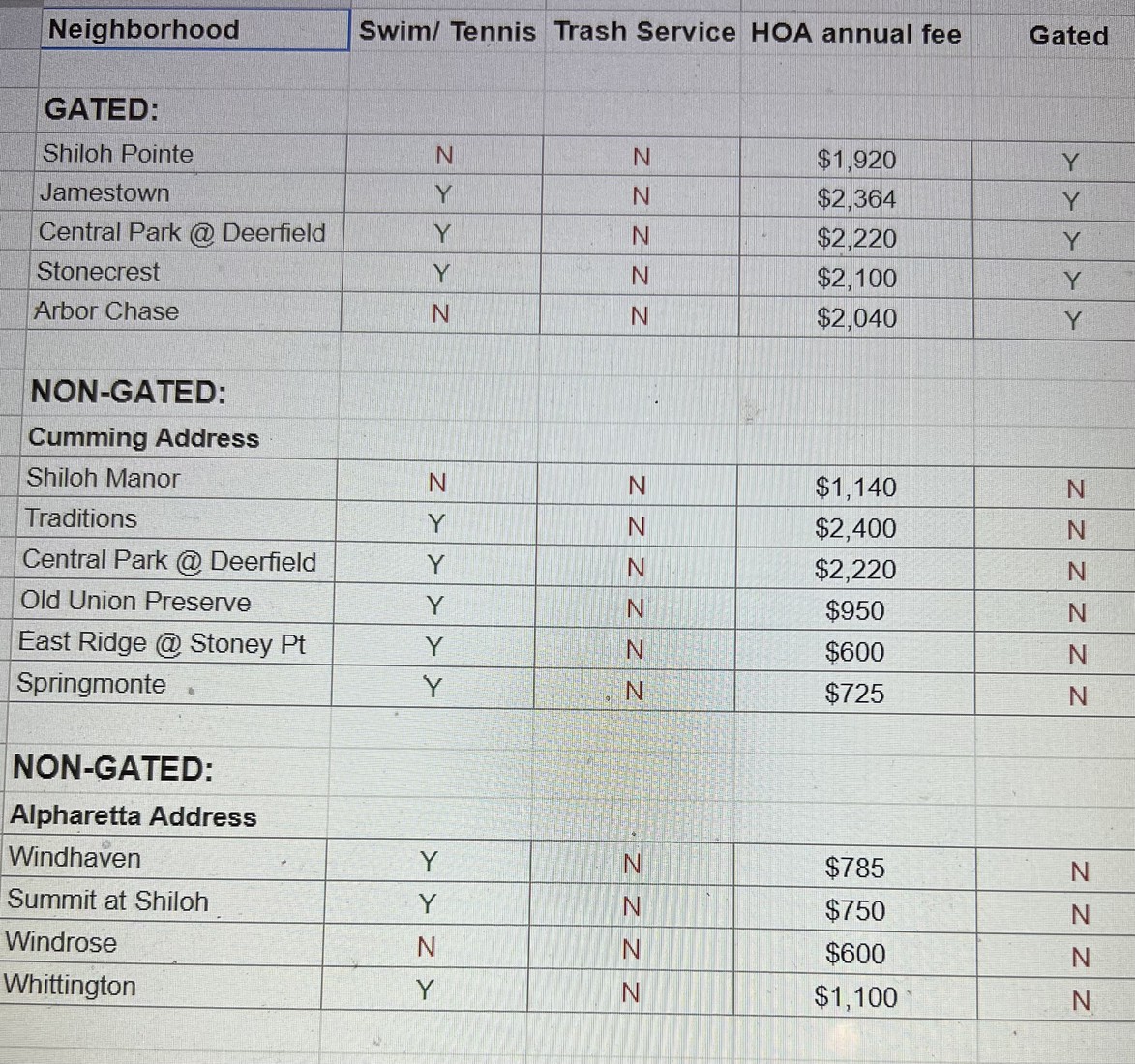 The following are comments from residents in the community. They do not reflect the opinion or position of the Board. None of the information provided in these comments were vetted by the board. They are simply comments that homeowners wanted included in the discussion.

Comments from non-board member homeowners (at the request of the authors):

Homeowner #2 Please comment on the additional security afforded by having our community gated. Not just by the decreased traffic, but by the fact that random individuals passing through the neighborhood are prevented from being allowed in our community. We constantly have unknown cars parked and hanging out in our parking area within the amenities.

Homeowner #3 Hello, I would like to make a statement with rhetorical questions about a two-gate system for our co3mmunity. "Do the ends justify the means" Is there really too much cross traffic on Shiloh Road from stop sign to stop sign? In my experience over 11 years, I have never seen more than two cars in front of me going down that stretch, from every hour in the morning, afternoon and evening. And I have never had to wait for more than one car or service vehicle to pull out of my neighborhood. The buildup of traffic will be from our own resident's, waiting to get in and out of the gates. 1 open and 1 closure / car! Amazon traffic is a myth. They have no needed advantage to go through our section of Shiloh Road, unless making deliveries to our homes. As far as driving safety, I don't think we should point that finger at outside people as much as ourselves and family, We're all guilty of that! Maybe get off our cell phones, I see it every day! Neighborhood crime safety? Since I'm living here, I've never heard of, or known of a brake-in by any outside criminals! We are an isolated neighborhood with no major road passing our community & no pass-through or exit out of each development! Making it an Ideal safe neighborhood with no need for Gates. Property value is an assumption with no fact. There's as many people who would not move into a neighborhood with gates as there are with. But the increase of $600 on our HOA fees is a definite value lost. Buyers only hear & remember, "$1,400 HOA fees, not what it's giving them. Also, those fees are guaranteed to rise with maintenance issues and a no-competition for lowering trash companies' costs. Service deliveries and missed appointments will happen many times. I have talked to others in gated communities and said it's a given!

1) My wife's Boss who lives in Crooked Creek ( a high end gated community) indicated that, (quote) " they break all the time & people are constantly tail-gating to get in or out". When guests are trying to get in, they have to come personally to the gates to let them in! Now cameras are being installed at a high expense. UBER has a big problem getting in, that delay will be charged to you, if they come at-all.

1a, The community also has1 trash company, Red Oak, and they don't like them!

2) Creek Stone, our million dollar neighbor doesn't use gates? Why?? Do they more than us? its also is a cut- through neighborhood.

4) With all the comments & concerns about the increased traffic, trucks & dangers, that started all the expensive preventive decisions we now have to consider!.... I haven't heard one comment about AMAZON anymore!

Homeowner #4:I just showed a home in James Town down the street and their hoa is $2,364 which includes similar amenities to our but much smaller homes and tighter lots they are about .10-.15 in size. Theirs does include basic lawn care. Caney Estates has no amenities and they pay 1300 for gate/trash. Shiloh pointe is 1920 per yr. again tight homes on very tight lots bi amenities but includes lawn, gate, trash. There are so many gated neighborhoods around here but, the issue is most of them have very tight lots. Which for most is not a desired want for a lot of buyers. Then you have the monster homes like in the Manor, Laurel Springs, St. Marlo etc. There are few in-between neighborhoods like ours with gates. As a Realtor who downsized from St. Marlo CC to this neighborhood. I looked for gated community that fit my needs and could not find one in the price point/size I wanted to be with Master on main and private larger lot. We thought the HOA was reasonable and was one of the agents who thought we needed initiation fees to help us prepare financially for improvements and I wrote a letter to the Board about it. Everyone said that would hamper re-sales.. it didn't. I have sold 2 houses in here as a listing agent and never heard any complaints about the initiation fee. I have also worked as a buyers agent and shown homes in here and told prospective buyers that the community is considering gating and all the buyers were very interested in that. If we get the gates it will increase the desirability of our neighborhood. We will be voting yes to the gates and single trash. How awesome will that be alone? To have 1 day of trash cans out? That alone will elevate the atmosphere of the neighborhood. Wouldn't it be great to have your kids roam knowing we are gated?

I wanted to comment about the proposed gate installation, and especially to mention some of the nonmonetary items that I am carefully considering in my decision. Twenty years ago, when we first moved here, Shiloh Road was much less traveled. We bought directly from the developer, who touted it as a quiet community at the end of a long, tree-lined business park. Back then, having to cross Shiloh Road to access the amenities or to walk Shiloh Road between our 3 sections was not as a worrisome endeavor as it has recently become. With the addition of many nearby houses, businesses, and the Amazon facility, we have noticed a huge increase in cut-through traffic, much of it at high speed. That traffic has brought some other negatives too, not just relating to traffic speed, which needs to be considered in any decision.

While there has been discussion about whether the gates add enough “value” for their cost, I am not looking at it in just that simplest view. While, yes, gates cost money and do add monetary value, the greater value may simply be in protecting our community amidst the changing larger community around us. Especially concerning, our family has had to call the police on several occasions in the last few years: 1) an apparent drug deal happening on the playground that broke up when we were seen taking pictures of their out of county license plates, 2) men that could only be described as looking like bouncers from some Atlanta night club hopping the pool gate in the middle of the afternoon and opening it for friends, who then walked menacingly around the pool deck looking for something/someone and then leaving, 3) and recently, someone speeding so fast that they ran not only the stop sign but through the pedestrian walkway WITH ITS LIGHTS FLASHING when a kid on a bike was waiting to cross. Additionally, I am considering the recent high speed accident pulling out of Belmont with an infant in the backseat, and of all our complaints of the dragsters on our and nearby roads. Our community facilities have been listed on websites as “public” park space – we have had to add comments that these are not public spaces – the location of our facilities on a now well-traveled road appears to others as public use, despite the signage. The NextDoor app, which lists comments and updates from neighborhoods within a set mileage from us, now lists almost weekly notifications of house or auto break-ins, package thefts from porches, destruction of property, etc. Speed bumps and the newly installed flashing lights are not effective deterrents to these issues, though I know gates won’t solve all of these concerns either. However, my research confirms some of what we have personally witnessed in our area -- the GBI lists statistics by county, showing substantial increases in robbery, burglary, larceny, and vehicle theft as of their 2019 report (the latest report that has been released). Other research shows this increase is largely centered in the southwest corner of Forsyth County, which Shiloh Farms borders. We are still a great place to live compared to other counties, but things have definitely changed in the last 20 years, so it seems prudent to carefully consider making some changes too. I think we all realize that Shiloh Farms was not originally designed as a gated community, but 20 years of change suggests implementing gates may be a wise option to define a clear property boundary and to maintain our safety, sense of community, and home values. 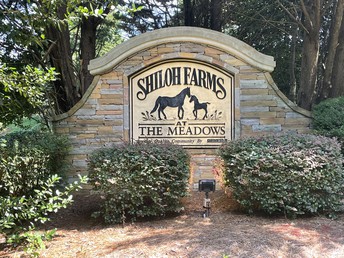 Shiloh Farms HOA Board of Directors

Follow Dawn Bourg
Contact Dawn Bourg
Embed code is for website/blog and not email. To embed your newsletter in a Mass Notification System, click HERE to see how or reach out to support@smore.com
close