Get email updates from nick:

The Erie Canal is a canal in New York that ran about 363 miles. The canal was built to create a navigable water route. The Erie Canal went from New York City to the

The United States Congress recognized the national significance of the canal system as the most successful human built water way, and one of the most important works of civil engineering. 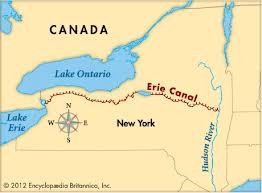 Come to the Erie Canal. It is a very cool adventure with a lot of sightings. It takes 6-7 days to travel the whole Erie Canal.
Low Bridge - The Erie Canal song