rudy is using Smore newsletters to spread the word online.

Get email updates from rudy:

(Organization of the Petroleum Exporting Countries)

(Organization of the Petroleum Exporting Countries)

this is my my project about opec during the 1970s. during the 1970s alot of countries in the middle east had formed an organization known as opec (organization of the petro;eum exporting countries) and this organization was the leader in the oil business. well during some confrintation in the middle east america picked to support the wrong side and opec wouldnt sell to us for years. then when they finally did decide to sell to america the price was quadroupled. causing panic in america. years pasted and the whole thing died down. 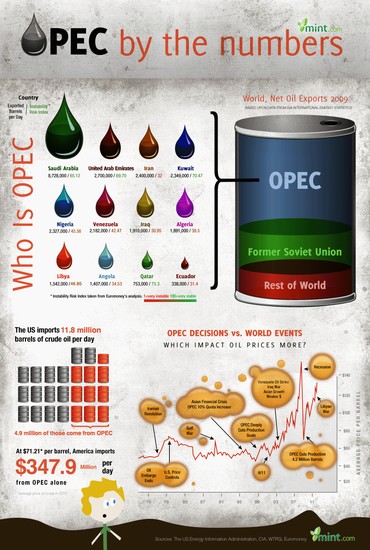 OPEC rose to international prominence during this decade, as its Member Countries took control of their domestic petroleum industries and acquired a major say in the pricing of crude oil on world markets. On two occasions, oil prices rose steeply in a volatile market, triggered by the Arab oil embargo in 1973 and the outbreak of the Iranian Revolution in 1979. OPEC broadened its mandate with the first Summit of Heads of State and Government in Algiers in 1975, which addressed the plight of the poorer nations and called for a new era of cooperation in international relations, in the interests of world economic development and stability. This led to the establishment of the OPEC Fund for International Development in 1976. Member Countries embarked on ambitious socio-economic development schemes. Membership grew to 13 by 1975.
The Oil Embargo Crisis of 1973

education-portal.com
The 1970s represented a period of economic distress in the United States. Learn about one of major factors, the 1973 oil embargo by OPEC, and its...

rudy is using Smore newsletters to spread the word online.