calvin is using Smore newsletters to spread the word online.

Get email updates from calvin:

The father of evolution states that among the same species, numerous changes in both phenotypic and genotypic element of an organism. From Charles Darwin’s prominent discovery regarding the variations of the Galapagos finches’ beak, he concluded that no species will be “constant” as they will likely to evolve through series of generations due to the changes of their environment as well as the process of reproducing with the same species with different genotypes. As a result, numerous organisms of the same species often mate with each other, causing non-constancy within a species, as proposed by Charles Darwin himself.

Darwin proposed other concepts that contribute to the idea of evolution.

Upon his visit to the Galapagos, Darwin noticed that the finches differed from each other in beak size and shape as they were also associated with different diets based on different food. From this observation, Darwin hypothesized that the original finches reached the islands and dispersed to different environments each carrying different traits, and those with favorable traits were able to withstand challenges in the environment and produce more offspring. This proposed hypothesis soon became the concept of branching evolution which implies the common descent of all species, and the occurrence of gradual changes in species over time. Darwin proposed one last contribution to the concept of evolution – natural selection – which provides the stepping stone for all scientific advancement that would soon follow in century to come.

Darwin presented his theory of natural selection using numerous arguments. The first is that every population possesses the ability to reproduce exponentially over time and their sizes remain stable around a constant size. The second is that individuals must compete for resources in order to survive while the resources itself are limited as populations grow larger. The third is that a population is consisted of a variety of traits that were passed from parents to offspring which contrasted with Lamarck’s theory of use and disuse. From this we now know that most traits are produced by the action of enzymes that are coded by DNA. Lastly, Darwin argued that favorable traits accumulate in a population due to only the fit individuals being able to survive and leave the most offspring. 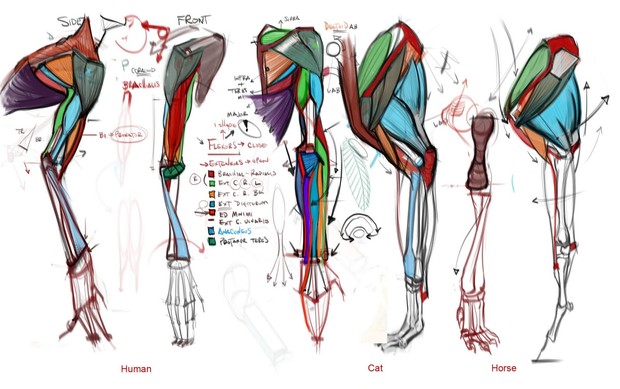 One of Darwin’s contributions to the concept of evolution is the idea of branching evolution. Darwin first noted that a multiple body parts across different species share similar structure, leading to his assertion that some species shared a common ancestor. The study of skeletal structures between primate and modern human gives a bridge of connection that implies a common ancestor between two different species. First, the skeletal structure of a primate and a human starting from the pelvis shows a common similarity in function and uses in both lifestyles. The next bridge comes from the similarity in the skeletal structure of both primate and human. The study that the evolution of opposable thumbs in human provides a link that both human and primate possess these structures to help them in their life, and again, is from a common ancestor that had already developed such functionality. Darwin’s implication of a shared common ancestry led to extensive studies and research of homology across all species until today.
Vestigial Structures
As mentioned earlier from Darwin’s observation of the finches’ beak, an original species of the same finches reached the islands prior to his exploration and dispersed to different environments where they gradually adapt over generations in ways that allowed them to get enough food and survive to reproduce. This process is called by Darwin as gradual changes in species over time. In order for species to stand the test of time due to both minor and extreme changes in their environment, their gene acquire the instruction to do so from mutation in the DNA sequence of a gene, thus resulting in changes of phenotype and genotype over generations of offspring. Evidence regarding changes in species is derived through vestigial structures in all organisms, particularly ourselves. One of the many vestigial organs in our body is the appendix which has become an obsolescent organ within our body. Scientists found that the appendix is much larger in plant-eating vertebrates as its main function is to digest herbivorous diet. Biologists conclude that the appendix is left behind by our plant-eating ancestor.

NOW YOU SEE ME, NOW YOU DON'T 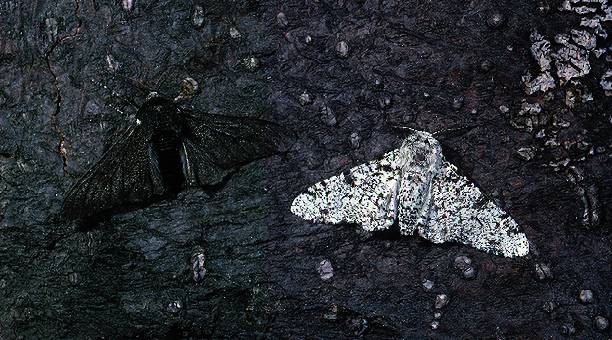 The last contribution the father of evolution, Charles Darwin, have contributed to the understanding of evolution is the process of natural selection as the mechanism for evolution. The most famous example of natural selection is the effect of Industrial Revolution of the 1800s on moths. As cities become polluted with industrial air wastes, tree barks turn darker and darker, resulting in a perfect background for moths that are dark looking. As a result, predators are keener to prey on moths that are easier to hunt – peppered moths – which population dropped as the years went by. Survivors such as the black moths in this scenario pass their genes to the next generation resulting in exponentially more black moths than peppered moths. The survival of the fittest challenge then continues on to the next generation as the darker moths populate the habitat while the peppered moths diminish in population, resulting in extinction.

Since Darwin’s original finding regarding the evolution of species, new technologies and research have enhanced and modified Darwin’s original interpretation of evolution. The first evolution that occurred in our technology is genetic engineering. Using biotechnology and fertilization, scientists have been able to reproduce artificially created organism identical to their parent that provide the sex cells. This process was called cloning. Not only cloning was found in the process, but gene alteration was found as well, resulting in organisms that exhibit other species genotype such as the ability to have fluorescence skin membrane. Today, genetic engineering has been used across domestic animals and agricultural plants to meet our resource needs. For example, genetically modified corns were implemented with a gene that gives plants insecticide property in order to keep crop eaters away. Biotechnology has also enhanced Charles Darwin’s original findings through genomic comparison between species alike. Through comparing the difference in the genetic make-up of different species such as humans and chimpanzees, scientists have come more evidential than ever to Darwin’s proposal that a shared common ancestry persists across all species.

Another major addition to Darwin’s contributions is the Hardy-Weinberg Equilibrium which constitutes that allele frequency remains constant over time if the population remains in genetic equilibrium, meaning no evolution occurs. Five conditions for the Hardy-Weinberg equilibrium to occur must take place that is utterly impossible in nature: random mating between the same species, no natural selection takes place, no mutation resulting in genetic changes, no addition to the population, and a very large population size. If one of these idealized conditions is broken, the equilibrium will be disordered, creating a genetic diversity, such as the addition of natural selection as what Darwin had proposed. The equation proposed to the theory explains that the equilibrium describes an idealistic state, and genotypic frequencies in nature can be measured and track from generations to another. The equation is p² + 2pq + q² = 1. P is defined as the frequency of the dominant allele, q as the frequency of the recessive allele. Due to the fact that natural selection is always occurring in our natural world as well as other occurrences such as inconsistency between species, gradual changes in species, and small genes mutation over time, like what Charles Darwin noted, evolution is an inevitable force in our world that drive genetic diversity.

Charles Robert Darwin, FRS was an English naturalist. He established that all species of life have descended over time from common ancestors, and proposed the scientific theory that this branching ...

calvin is using Smore newsletters to spread the word online.

Follow calvin go
Contact calvin go
Embed code is for website/blog and not email. To embed your newsletter in a Mass Notification System, click HERE to see how or reach out to support@smore.com
close