Brynna is using Smore newsletters to spread the word online.

Get email updates from Brynna:

Much Revolution. Very Gore. Such Intense.

Much Revolution. Very Gore. Such Intense.

What made them so angry?

One of the reasons that America wanted to revolt against the Brits is that they loved to cut corners by putting all these acts and laws in place making the colonists miserable, and Great Britain more profitiable, and powerful.

One of the reasons that America wanted to relentlessly murder the Brits is that they stole all of their moolahs. All of it. The stamp act, the sugar act, the tea act and more put taxes on almost everything that the colonists did not have, making the colonists feel as if they were being robbed from the government and as they couldn't even have a say in anything, even as citizens of England, who should have rights to be represented in their government. 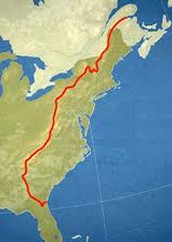 Also, after the French and Indian war, Great Britain wanted to keep their colonists to west of the Appalachians (Proclamation of 1763), so they wouldn't start a war with the Native Americans who happened to occupy much of the acquired Ohio river valley, the territory that Britain just had won from the French. But this made the colonists feel as if they were fenced in to a certain area, unable to expand and grow, angering them.

Limited Trade with Others

Along with that, the Navigation Acts limited who they could trade with and which ships could come into their harbors so Britain could make an extra buck, by limiting who they could trade with. This created a monopoly with the british being the company, enforcing mercantilisim, which the colonists were not very fond of. This made many resort to smuggling, which could happen very easily, because the Brits were not very watchful in the colonies, and many of the governments in the colonies very leinant with it becuase it was cheaper and easier to smuggle goods.

Even the colonists had to feed and house the soldiers so Britain would not have to make as many forts, allowing them to cut corners, making the colonists annoyed once again. This was called the Quartering Act, intending to make things easier on Britain, but not on the colonists, which is a big theme on what reasons lead to the revolution.All of this caused many to make groups to protest the British policy, including The Daughters of Liberty and The Sons of Liberty, who often boycotted british goods, sent out propaganda, and more.

Let's go on an Internet Adventure!

Since my computer is amazing and will not put the link in this, you will have to find the website yourself, so do this-

1.What was the Boston Massacure started by?

2. What did the Townshend Act tax?

3. What did the Sugar Act intend to stop? 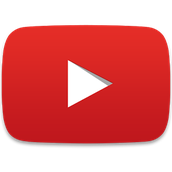 Here is a video that actually just dusts over the whole topic.(:

1.What did the colonists do to protest aginst the british?

2.How many were killed in the Boston Massacure?

3.What did Thomas Payne Write?

Much Cartoon. Very Revolution. Such Funny. 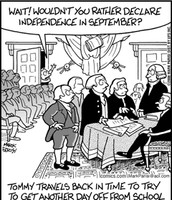 Brynna is using Smore newsletters to spread the word online.