Debate is life - the rest is just prep time

Debate is life - the rest is just prep time

Team Canada had an extremely successful tournament at the recent Harvard College World Schools Invitational, which was held in Boston from March 8th to March 10th, 2019. The teams argued incredibly complex and fascinating debates, ranging from topics such as whether there should be a military intervention in Venezuela to topics about the merits of the decline of labour unions in the United States. A large congratulations is in order for all three teams, who all broke. One team, represented by Saara Meghji, Alice Chen, and Angelina Zhang made it to the octofinals; another team, represented by Jonathan Liu, Matthew Anzarouth, and Allan Lee made it to the quarterfinals; and the team to represent Canada at Worlds this year, composed of Angela Li, Matthew Farrell, Max Rosen, Naomi Panovka and Vivian Zhang won the tournament, winning every out round unanimously, including a riveting final against Team USA about whether post-colonial states should remove all immigration restrictions on migrants from former colonies.

It was an extremely successful tournament with many good memories, including members of the team learning how to use Uber, Naomi demolishing a whole bag of popcorn in a matter of moments, and much rejoice at Vivian's acceptance to Harvard. Team Canada is extraordinarily excited for World Schools and the training camp beforehand, which will be the next time the members will be reunite. 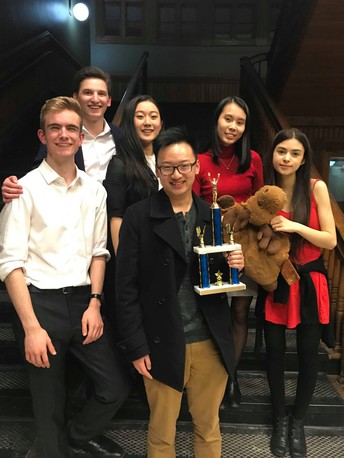 Supporting youth in informed debate through your donations

In an era of "fake news" and increased nationalism, world's schools debate plays a central role in youth from around the world researching, understanding, and debating important contemporary issues from both sides. Team Canada, with its members from across a very large geographical area, has unique challenges in meeting as a group, and in preparing or debating together. Your donations are critical in defraying costs and providing access for bright young minds regardless of socio-economic status. Donations to Team Canada in 2019 are an investment in ongoing dialogue between young people about the world's most pressing social, economic, legal, and international relations issues, and a commitment to Canada's leading role in the debate community.
PO Box 74158 – 148 – 555 Strathcona Blvd SW – Calgary, Alberta – T3H 3B6 treasurer@csdf-fcde.ca csdf-fcde.ca/world-debate/resources/

Nine members of the developing squad represented Canada at their first international event – ARGO2018 in Romania, August 30th to September 2nd, 2018. Our team represented Canada with three teams of three who all placed 1st, 2nd, and 3rd at the event. It is fair to say that our presence at ARGO2018 was a Canadian Debate Hatrick! 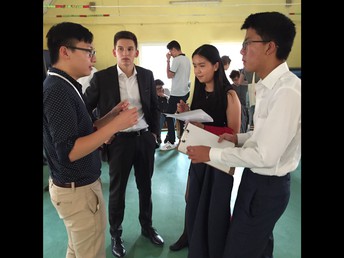 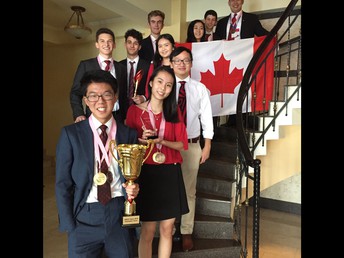 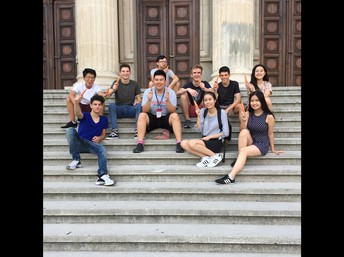 Celebrating on the steps in Romania

Team Canada has members from coast to coast

Remaining Development Team for 2019 in no particular order are: