Skyla is using Smore newsletters to spread the word online.

Get email updates from Skyla: 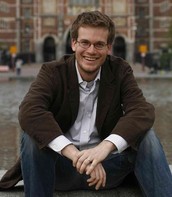 John Green was born on August 24, 1977. He grew up mainly in Orlando, Florida but also partially in Birmingham, Alabama. John has a younger brother named Hank. The two of them run one YouTube channel called the Vlogbrothers which they use as a means of communicating.

John Green has written 5 novels individually. The titles are Looking For Alaska, Paper Towns, Will Grayson Will Grayson, The Fault in Our Stars, and An Abundance of Katherines. John double-majored in English (mostly Mark Twain) and Religious Studies (Islam) when going to college at Indian Springs College in Alabama. John then received his B. A. at Kenyon College.

He currently lives in Indianapolis, Indiana with his wife, Sarah Urist Green, and their two kids, Alice and Henry.

John Green and his brother Hank both co-created the event of VidCon. They describe it as an industry conference and a big party. A quote from their About page on the official website says "We want people to make important business contacts to grow their companies and their careers, but we would prefer that they do it while dancing to a rock song about Doctor Who."

John Green has won multiple awards including the TIME List of 100 Most Influential People. Now to list the awards he was either nominated for or won for writing:

John and Hank started out with the Vlogbrothers for their joint YouTubing career. The first Vlogbrothers video was recorded by John on June 28, 2007 and it was called June 28: How to be a Microfinancier. Between the two brothers, they've recorded 1,238 videos.

John also runs a YouTube channel of his own, called Crash Course. Crash Course is an educational channel where Mr. Green teaches in a way that is fun for the viewers. Crash Course was created on May 19, 2006. That channel has 225 videos.

Looking For Alaska is about Miles Halter who is fascinated by "famous last words". When his favorite poet is dying, Miles leaves his boarding school to look for the "Great Perhaps". He goes to Culver Creek where Alaska Young is waiting for him. Alaska will pull Miles into her labyrinth and catapult him into the Great Perhaps.

An Abundance of Katherines

An Abundance of Katherines is about Colin Singleton. Colin likes girls named Katherine. He has dated-and been dumped by- 19 Katherines. Colin sets off with his friend Hassan to test a mathematical theorem he hopes will predict the future of any relationship and win the girl.

Paper Towns follows Quentin "Q" Jacobsen. Q has always loved the adventurous Margo Roth Speigelman. He jumps at his chance when Margo recruits him in the middle of the night for an all night revenge adventure. Margo, the next day, goes missing. Quentin now embarks on an adventure of his own to find her.

Two boys, both named Will Grayson, cross paths in Chicago. The Will Graysons found their lives going in new, unexpected directions as they build towards romantic change-of-hearts. And the epic production of history's most fabulous high school musicals.

Hazel Grace Lancaster is a normal teenager except for one thing: she has terminal cancer. When Hazel is forced by her mother into a Children's Cancer Support Group, she meets the gorgeous Augustus Waters. Augustus will change her life more than anyone else ever has.

Skyla is using Smore newsletters to spread the word online.