Assets representing the Roman heritage of Budapest were selected as the Hungarian geolocations of the TOURiBOOST project for various reasons. The Ripa Pannonica, the outer frontier of Pannonia and the Roman Empire located in Austria, Slovakia, Hungary, Croatia and Serbia is a tentative World Heritage site which is being nominated for WH status in 2019 as an extension to the already existing Frontiers of the Roman Empire World Heritage Site. The Hungarian Limes Association was founded in 2010 with the aim to establish and maintain a unique cultural route including Roman heritage-themed museums, exhibitions, archeological parks and memorial places along the Pannonian Limes.

The sites of the Ripa Pannonica in Hungary lie mostly on the right bank of the Danube, including well-developed and less well-developed heritage assets located in Budapest such as military installations and civil settlement structures. The south and the west gate of the legionary fortress, the bath house and the large amphitheatre are partly preserved and still visible. The core element of the Roman site of Budapest-Aquincum is the archaeological park which includes a large open-air space and a new museum building. It offers regular exhibitions, education programmes and a museum store with extensive information material, i.e. it is already developed as a high quality tourist attraction. Besides Aquincum Museum and Archaeological Park, the list of Roman remains in Budapest include, among others, the Hercules Villa, the Thermae Maiores Roman Baths Museum, the currently closed Military Town Museum, two Roman amphitheatres, the northern town wall and gate, the eastern and the southern gates of the legionary fortress, the Roman aqueduct, the ruins of a barrack block and sanctuary, the Cella Trichora (an early Christian burial chapel).

A particularly important element of Budapest’s Roman heritage is the remains of the fort of Contra Aquincum in downtown Budapest, partly located within the building of the Inner-city Parish Church of Our Lady, partly under the current Március 15 Square. The Roman Catholic Inner-city Parish Church is the oldest church in Budapest, its architectural and cultural heritage illustrate the 2000-year-long history of the city. In addition, the Church is one of the most dynamically developing managed visitor attractions in Budapest, with a particularly active and creative tourism management team (the parish priest, Dr. Zoltán Osztie was named Tourist Ambassador of Budapest in 2017 by the Budapest Festival and Tourism Centre, the city’s TDM organisation). Kodolányi János University and the Inner-city Parish Church have collaborated successfully in recent years, so it was a logical decision on behalf of KJU to involve the Church and its tourism development manager, Mr Mihály Aranyossy, as a strategic partner in the TOURiBOOST project. Due to its central Pest location, the church building may serve as a focal point for the new heritage tourism product to be developed within the framework in the Local Attraction Plan. The Roman ruins of Contra Aquincum are exceptionally well excavated and exhibited in the 24-hour-open church building, visible both from the ground level through a glass platform and inside the lower chapel, also as a background to the liturgical and secular events organised in this unique space. The Church is situated in Március 15 Square, on the site of the Contra Aquincum fort, an important historic site along the Ripa Pannonica. Although the underground remains of the fort are only partly visible (and currently not accessible) from the square, the site serves as a unique geolocation since a giant map depicting the line of the River Danube and all the Roman forts and towns located along the Limes is carved on the square’s surface. Consequently, the Inner-city Parish Church and the Március 15 Square form a unique complex with a high potential in the interpretation and development of Budapest’s Roman heritage.

Aquincum was one of the most important Roman settlements along the Danube river. Aquincum Museum, a branch of Budapest History Museum, opened in 1894. Its permanent exhibitions present, among others, the unique Aquincum organ, mosaics, statues, tombstones, and other valuable archaeological finds from the Governor’s Palace. The Museum's Archaeological Park displays the remains of around a third of the Aquincum Civil Town including the most characteristic public buildings and dozens of private houses, reflecting the town’s layout during the 2nd and 3rd centuries. The Museum is the largest collection site of Roman archaeological and historical monuments of Budapest. Each year the Museum hosts a traditional Roman spring festival called Floralia, with theatre performances and gladiator shows. 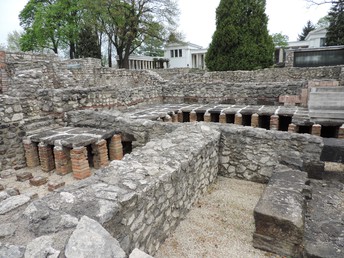 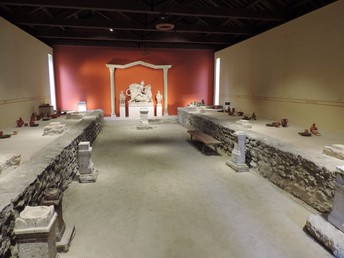 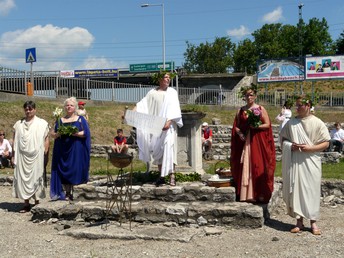 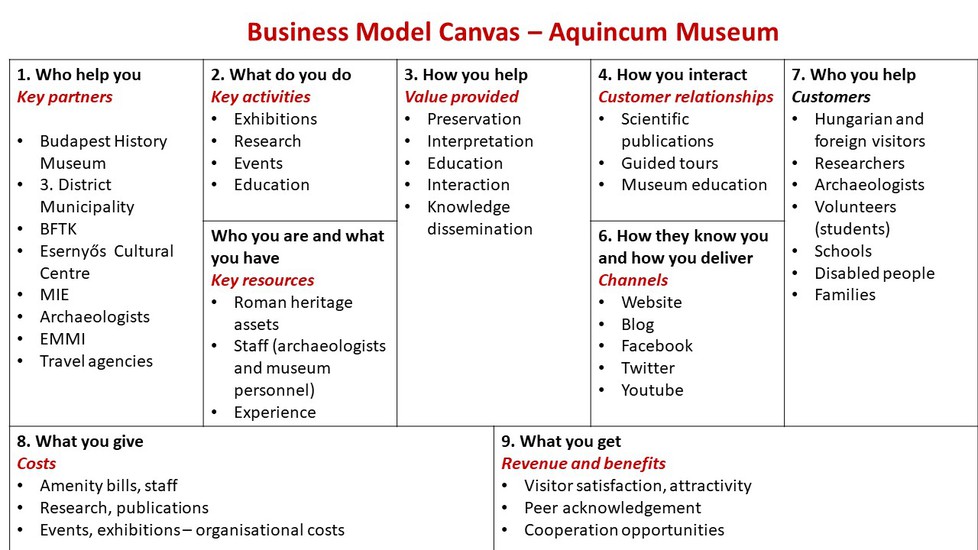 The Roman Bath Museum presents the baths of the Roman legionary fortress, the Thermae Maiores. One of the halls of the legionary fortress’s baths was found in 1778, during the first archaeological excavation in Aquincum. The legionary baths were a monumental structure (120 m by 140 m), that laid at the intersection of the fortress’s two main roads. The baths’ main entrances opened onto these two roads. The building was constructed in the 2nd century and rebuilt a number of times afterwards. The bath complex offered soldiers an exercise court (palaestra), cold, warm, and hot pools, baths, steam baths, and spacious halls with underfloor heating. Entrance to the remains is available through the pedestrian underpass at Flórián Square. Above the ruins, two two-lane overpasses were built for car traffic between Szentendrei Road and Árpád Bridge, which provide partial protection against the weather. Within the archaeological area, detailed descriptions and maps help visitors' orientation. 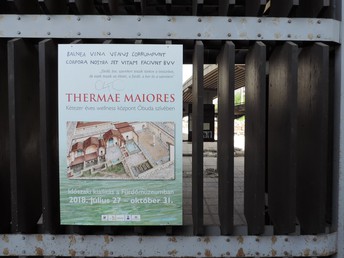 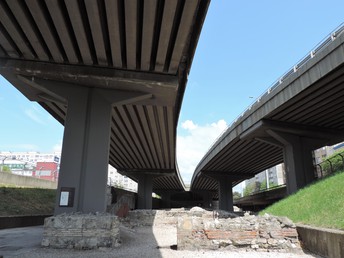 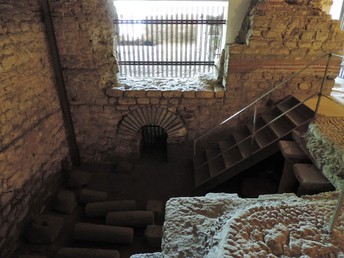 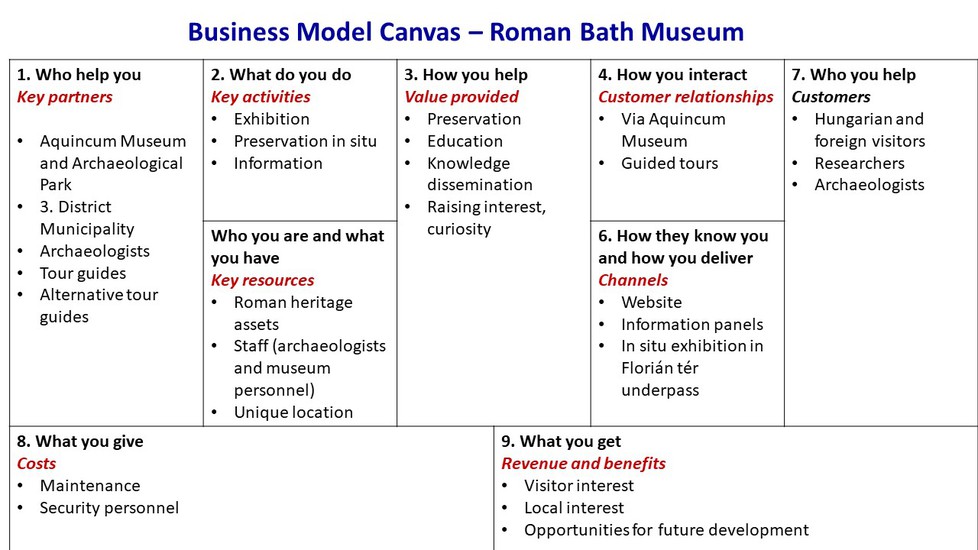 The Civil Town amphitheatre is the smaller of Aquincum's two amphitheatres. Its remains lie beyond the northern wall of the former Roman town. The building, already in operation in the mid-2nd century, was renovated multiple times during the 3rd century. Based on its structure, the almost circular building (its axes are: 86.5m x 75.5m) can be classified as an earth amphitheatre. In such amphitheatres the slope for seats was created by ramming earth between two ring walls. The stone benches of spectators were placed on this, some of which carried the inscribed name of their owner. The roughly 6-7000 spectators could enter the partially-covered stands from a ramp on the outside. The arena, which was surrounded by a 3-metre-high wall, could be entered through a gate on either side of the east-west axis. The amphitheatre held various sporting events and gladiatorial games mixed with animal hunts. Since this building had the largest capacity in the town, it was also used for more serious public business. It hosted assemblies and civic festivals as well as speeches in honour of the visiting emperor. The gladiator barracks were located by the amphitheatre, where the champions of the popular games exercised and trained. Its courtyard, surrounded by a stone wall, and its tower are now below ground. On the southern side of the western gate stood a sanctuary of Nemesis, the goddess of amphitheatre games. During the excavation of the sanctuary, a fragment of the goddess’s statuette was found along with a number of inscribed altars. 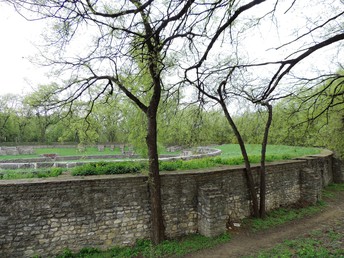 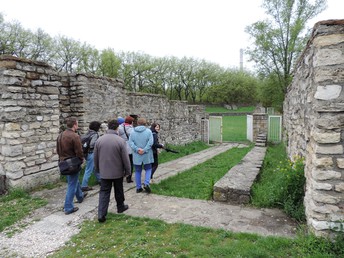 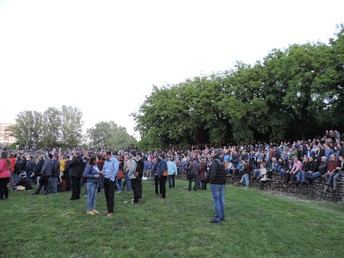 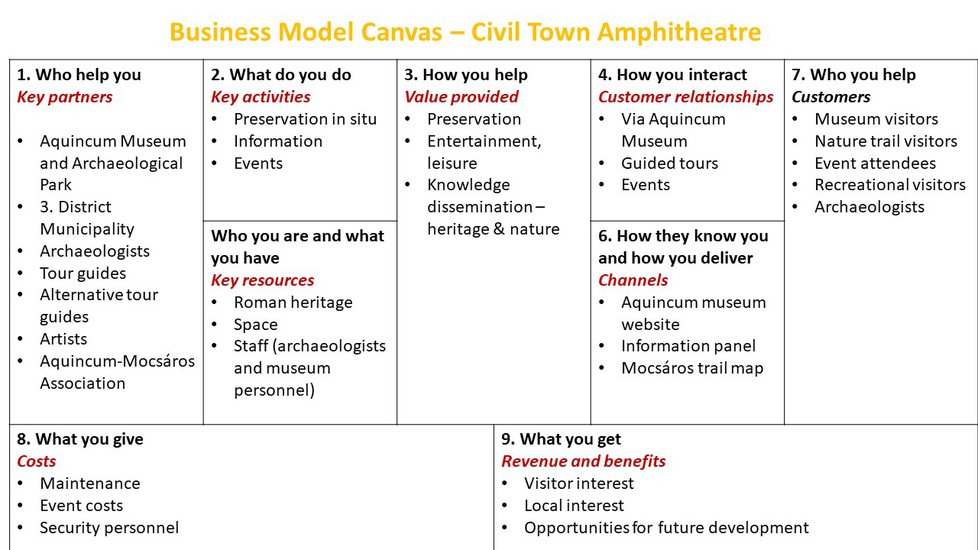 Március 15 Square is located in the area where the Roman fort of Contra-Aquincum stood in the 2nd-3rd centuries. The first remains of Contra-Aquincum, the western wall of the camp, were found in 1863, during the foundation works of the Holy Trinity statue. In 1898, when the Elisabeth Bridge was built, the southwest corner tower of the fortress emerged, with 27 Roman relief stones embedded in it. In the early 1940s, when the crypt of the Inner-city Parish Church was rebuilt, the foundations of the cell trichora, several tombstones of the 2nd century used as building materials and a terrazo floor were found. Currently the excavated Roman ruins are only partly visible. The outlines of the fortress are marked with stone tiles on the pavement. Between the northern and southern sections of the former Roman wall, a stylized line representing the Danube river can be seen, with the names and floor plans of the Roman military garrisons in Pannonia province. The remains of Contra-Aquincum can be seen through a glass cover at the street level. 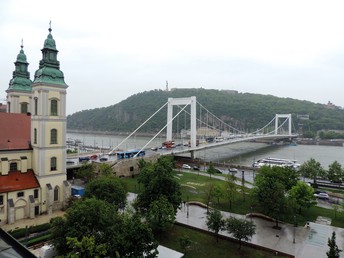 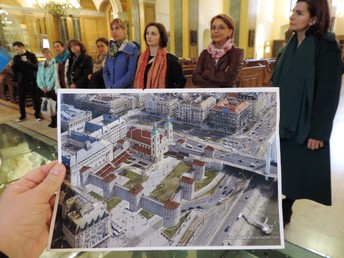 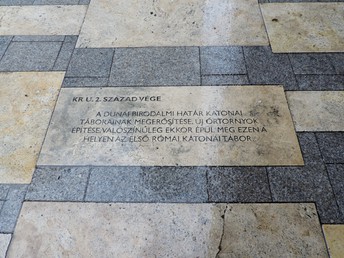 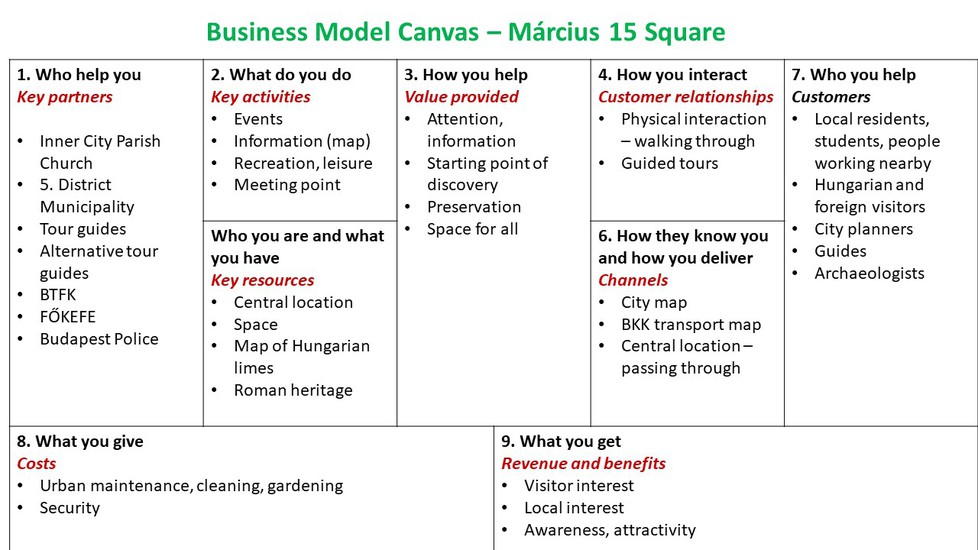 Inner-city Parish Church of Our Lady

The Inner-city Parish Church of Our Lady has a history of nearly 2,000 years. The church building and the square in front of it covers a large Roman relic, a four-sided camp with dimensions of 86 by 84 meters. The Roman camp was completed in 350 AD and it was used after 375. A three-naved church, built in the 11th-12th century, occupied the place of the old command building near to the southern wall of the 4th century Roman camp. Excavations between 2014 and 2015 provided information about the Roman and medieval remains found under the church floor. The archaeological finds of the excavations are displayed in the new crypt beneath the floor of the church. In addition to the Roman heritage, the Inner-city Parish Church has a particularly rich history, making it an invaluable asset in heritage tourism development in Budapest. Among others, Saint Elizabeth of Thuringia, was engaged to Hermann I, Landgrave of Thuringia, in the three-naved church. in 1458 noblemen met here in order to elect a new king, they supported Matthias Corvinus, who was proclaimed Matthias King of Hungary by the people gathered on the frozen River Danube. In 1490 the assembly electing Vladislaus II also convened in this church. After 1541, during the Ottoman rule the church was used as a djami for a short period of time which is demonstrated by the Mihrab in the wall of the sanctuary. Lajos Kossuth, leader of the 1848-49 revolution against the Habsburg empire, married Terézia Meszlényi in this parish church. On 25th May 1856 Adolf Kolping, a priest from Cologne, delivered a speech in the church, which indicated the beginning of the Kolping movement in Hungary. Between 1858 and 1871 Ferenc Liszt often stayed in the parsonage next to the church, and he conducted orchestras playing his and others’ compositions in the building. 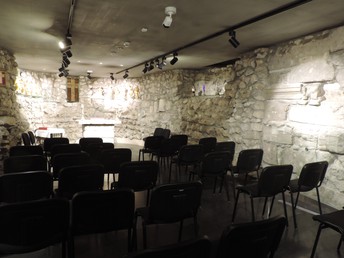 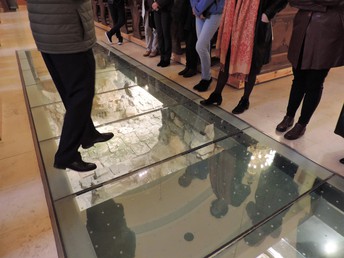 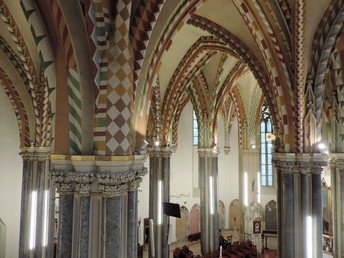 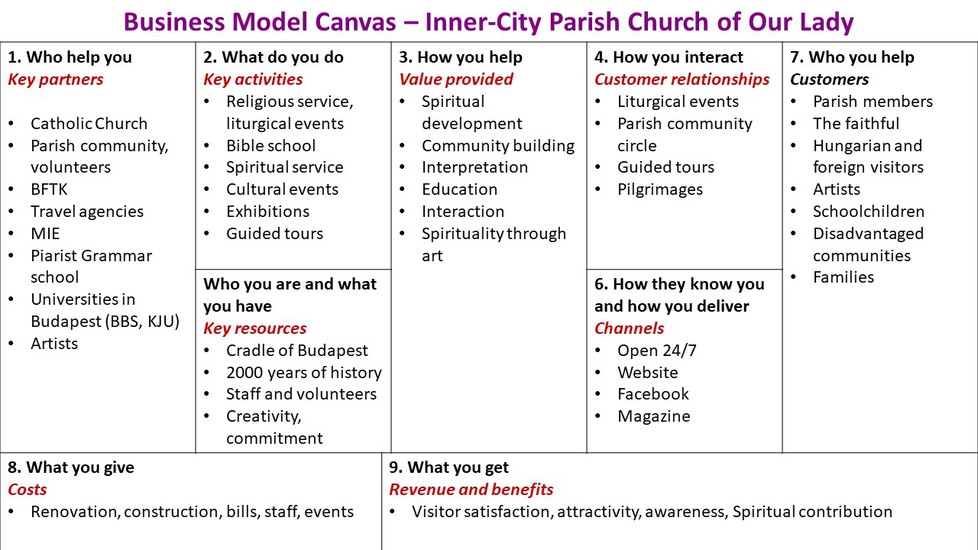 Follow Tamara Ratz
Contact Tamara Ratz
Embed code is for website/blog and not email. To embed your newsletter in a Mass Notification System, click HERE to see how or reach out to support@smore.com
close