cantero is using Smore newsletters to spread the word online.

Get email updates from cantero:

What is the Region?

How Was the Grand Canyon formed?

How was it formed?

The truth is that no one knows for sure though there are some pretty good guesses. The chances are that a number of processes combined to create the views that you see in todays Grand Canyon. The most powerful force to have an impact on the Grand Canyon is erosion, primarily by water (and ice) and second by wind. Other forces that contributed to the Canyon's formation are the course of the Colorado River itself, vulcanism, continental drift and slight variations in the earths orbit which in turn causes variations in seasons and climate. 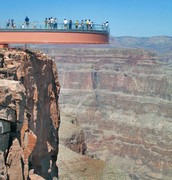 When is the best time to Visit Grand Canyon?

The best times to visit the Grand Canyon are March through May and September through November when daytime temperatures begin to cool and the crowds begin to thin. If you decide to visit during the summer (the park's peak season), be prepared for hordes of tourists and very limited lodging availability. You can find deals on hotels during the winter, but much of the park (including the entire North Rim) closes after the first snowfall.

cantero is using Smore newsletters to spread the word online.