Somin is using Smore newsletters to spread the word online.

Get email updates from Somin:

Wars, The League, The King (FIRST TRY IN SMORES)

Wars, The League, The King (FIRST TRY IN SMORES)

The Three Wars between Persia and Greece

After the Battle of Marathon, Pheidippides ran 26 miles and 385 yards without resting to tell the Greeks they had won. He died immeidately after huffing out the news. Today, people run the Marathon with the exact same distance Pheidippides ran to honor him.

The Battle of Marathon

Even after their triumph upon Persia, Greeks feared of the future invasion that might have been occurred to them. As a result, the Greeks created the Delian League. The Delian League was made due to the Persian Wars to save an account for another war that might have been coming. The Delian League was an alliance of the city-states in Greece led by Athens. However, Sparta did not like the fact that Athens dominated the funds and became rich from the profits they earned. As an effect, the league was broken with the Peloponnesian War.

The Peloponnesian War was between Sparta and Athens. The cause of this war was that Sparta was jealous that Athens was becoming rich because of the Delian League. The Spartans won this war because the Athenians were getting sick and dieing out. The Peloponnesian War was making the Greeks weaker and as a result, Macedonia, which had been observing the Greeks, was able to invade Greece. 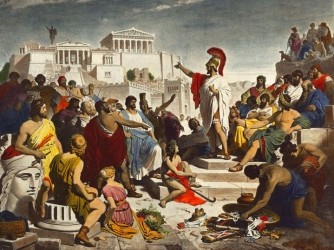 Alexander the Great’s motives were caused by the Peloponnesian war. Alexander loved Greece even though he was Macedonian himself because he was taught by Aristotle. Aristotle taught him about Greeks and their amazing culture. Some of the things he taught him would eventually become enduring impacts of Greeks. Alexander eventually conquered other areas around Greece, and while he did, he spread Greek culture, Hellenism. Alexander the Great was important because without him, Greece’s legacy would not have been able to spread throughout Europe and become the enduring impacts we now have today.

Somin is using Smore newsletters to spread the word online.