In The Hunting Ground, bringing attention to college sexual assault cases in effort to end the silence was effectively viewed through personal interviews, statistics, and an appeal to pathos.

The purpose of this particular documentary was to inform viewers and bring attention to the silence of sexual assault cases a well-known universities. Many cases reported went without authority attention or involvement to eliminate the issue. Victims were accused of being the cause of their abuse due to clothing, alcohol or drug intake, or even their locations.

From the beginning of the documentary, interviews with victims of sexual assault, campus staff, and campus police were conducted. When a view has factual evidence coming from the victim, it is easier to understand and brings attention to the purpose. Interviews with campus staff or police give spoken proof of unfilled cases not being reported is due to public cases or bad reputations for the university. 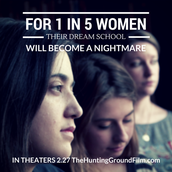 "More than 16% of college women are sexually assaulted in college" me being a junior in high school, moving away to college in a year makes me think what if I am apart of that 16%. "88% of women who are sexually assaulted, do not report" these women are scared and embarrassed to report and when they do, nothing is done. "In 2012, 45% of colleges reported zero sexual assaults" many assault cases are reported to the colleges but colleges do not report or involve the police because it will end up as a public record, in which they do not want.

For me as an individual heading to college in one year, this opened my eyes; the interviews with the victims broke my heart knowing that people actually assault their friends and the campus does nothing about it. The re-enactments of the places the victim was and where they were assault made me realize it can happen anywhere, even where you least expect it to. Throughout the scenes statistics would show, each one would bring you to reality a little more and touch your heart each time, this is life, and it is happening.