The Beliefs of Pilgrims

The Beliefs of Pilgrims

How Marriage Used to Work

To understand the meaning of this article, one must understand that unlike today's society, marriage was not driven by love, but was rather a contract between a man and a woman in order to avoid adultery as well as birth children.

However, unlike the Catholic Church, their marriage was more of a civil affair rather than a religious. Because of this, a marriage is no longer held by church ministers but civil magistrates. Because they do not follow the religious customs, they also refuse to include religious ceremonies in their marriages, including the exchange of wedding rings.

Respect is also an important component in marriage. As stated by Caleb Johnson, "The love of the husband to his wife must be like Christ's to his church." This also applies to wives to their husband, where they are required to reverend subjection to the husband's lawful words. 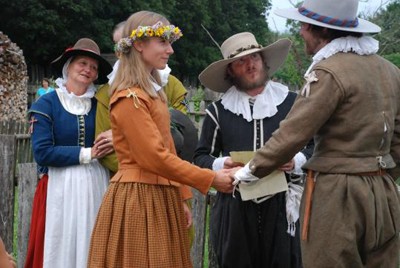