Species equilibrium model: it predicts that at some point the rates of immigration and extinction will reach an equilibrium point that determines the island's average number of species.

Native Species: species that normally live and thrive in a particular ecosystem

Nonnative Species: species that migrate into an ecosystem or are deliberately or accidentally introduced into an ecosystem by humans.
Keystone species: species that play roles affecting many other organisms in an ecosystem
Interspecific competition: attempts by members of two or more species to use the same limited resources in an ecosystem.
Resource partitioning: process of dividing up resources in an ecosystem so that species with similar needs use the ams scarce resources at different times, in different ways, or in different places
Predation: situation in which an organism of one species captures and feeds on parts or all of an organism of another species.
Parasitism: interaction between species in which one organism, called the parasite, preys on another organism, called the host, by living on or in the host.
Mutualism: type of species interact in which both participating species generally benefit.
Commensalism: an interaction between organisms of different species in which one type of organism benefits and the other type is neither helped nor harmed to any great degree.
Early successional plant species: plant species found in the early
stages of succession that grow close to the ground, can establish
large populations quickly under harsh conditions.
Mid-successional plant species: grasses and low shrubs that are less
hardy than early successional plant species.
Late successional plant species: mostly trees that can tolerate shade
and form a fairly stable complex forest community.
Disturbance: a discrete event that disrupts an ecosystem or community.
Inertia or persistence: ability of a living system to resist being
disturbed or altered.
Constancy: ability of a living ecosystem to remain about the same size.
Resilience: ability of a living system to restore itself to original
condition after being exposed to an outside disturbance that is not
too drastic.
Complexity-refers to the number of species in a community at each
trophic level and the number of trophic levels in a community.
Precautionary principle-when there is scientific uncertainty about
potentially serious harm from chemicals or technologies, decision
makers should act to prevent harm to humans and the environment.

Ecological succession: process in which communities of plant and

animal species in a particular area are replaced over time by a series
of different and often more complex communities.
Primary succession: ecological succession in a bare area that has
never been occupied by a community of organisms.
Secondary succession: ecological succession in an area in which
natural vegetation has been removed or destroyed but the soil is not
destroyed.
Pioneer species: first hardy species, often microbes, mosses, and
lichens, that begin colonizing a site as the first stage of ecological
succession.

What is Community Ecology?

In ecology, a community or biocoenosis is an assemblage or associations of populations of two or more different species occupying the same geographical area and in a particular time. The term community has a variety of uses. In its simplest form it refers to groups of organisms in a specific place or time, for example, "the fish community of Lake Ontario before industrialization".

1. What determines the number of species in a community?

The number of species in community is determined by how fast new species arrive and old species become extinct and the community's size.

2. What different roles do species play in the community?

3. How do species interact with one another in a community?

Some ways that species interact include competition, predation, parasitism, and commensalism. This can also increase a species ability to survive.

4. How do communities change as environmental conditions change?

Over time new environmental conditions can cause changes in community structure that lead to one group of species being replaced by other groups.

5. Does high biodiversity increase the stability of a community?

Yes because it keeps the population balanced and helps there to be genetic variation. 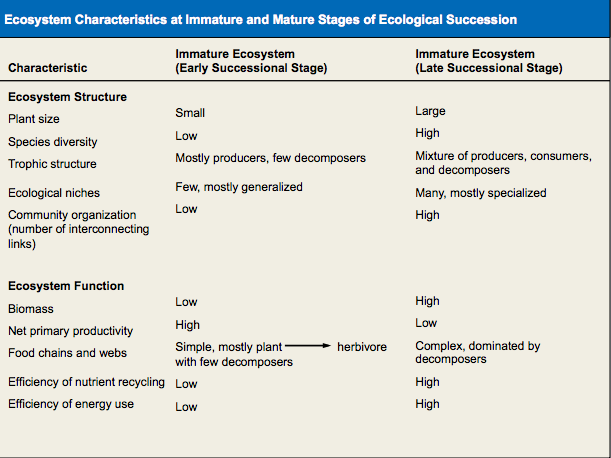 Check out this website to learn more about Community Ecology!