AW is using Smore newsletters to spread the word online.

Get email updates from AW:

Polyphemus is also know as a Cyclops. He has one eye in the middle of his head. He is much bigger than a human person. He is also more like a God than a person. He was very uncivilized, and would not grow crops to support himself but would herd and eat sheep. he lived around fellow cyclopses. He lived in caves. He did not like Zeus or any of the other Gods. He is a son of Poseidon 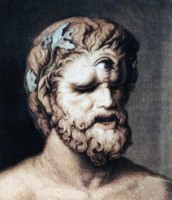 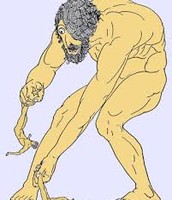 Polyphemus about to eat two of Odysseus's men.

Role in the Odyssey

Odysseus's men landed on Polyphemus's island. Polyphemus found and trapped them in his cave. He slowly ate the men two at a time. Odysseus in an idea to escape got Polyphemus drunk with wine from his ship. They then blinded Polyphemus by stabbing him in his one eye with a heated stick. The other cyclopses hear Polyphemus's scream and gathered outside his cave. The men inside hid under the sheep in the cave and escaped without being noticed. The men then escaped onto their ship. Polyphemus then blindly through boulders at Odysseus's ship trying to sink it. Polyphemus did not him them and Odysseus and his men escaped.

1.First picture and information taken from:

AW is using Smore newsletters to spread the word online.