Meg is using Smore newsletters to spread the word online.

Get email updates from Meg: 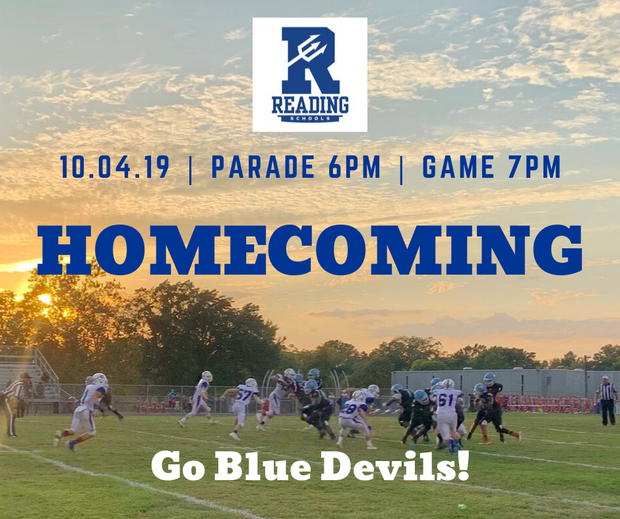 Reading's annual Homecoming Parade will be held right before the game on Friday, October 4 beginning at 6 p.m. from the former Central/Reading High School/Middle School parking lot.

Turn right out of the lot

District to Host Meeting about Demolition of Schools

The Reading School District is hosting a community meeting on Tuesday, October 29, from 6-7 p.m. in the cafetorium of Reading’s new PK-12 School to discuss the demolition of the Hilltop and Central sites. 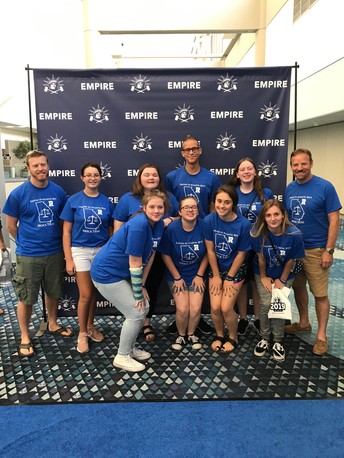 Now that the dust has settled and we’ve had a chance to catch our breath, I wanted to give you all an update on our incredible trip to Atlanta. We competed against some of the top teams in the country and the world.

Our Blue Devil Mockers finished their very first Empire Competition in the Sweet 16. Additionally, they had the largest single margin of victory over a team in a single round, an unbelievable +70!

In the first round, we challenged a team from South Florida, Cardinal Gibbons High School. We thought we beat them handily but when the scores came out, one judge had us winning the trial by 20 while another had us losing by 5. With a 1-1 record, we drew Roman Catholic High School out of Philadelphia. This team has over 60 members. They have a second-place Empire finish, two third places (including this year), a fourth-place, a fifth-place, and two sixth-place finishes. They were Philadelphia State Runners-Up three of the past five years. Roman was one of the best mock trial teams we have ever seen and our kids were not intimidated in the least bit. They gave it their all but when results came out, we lost by 6 and 10 points, again, to the team that finished third at Empire this year and fourth last year.

We went into day two of the competition with a 1-3 record and our opponent just got harder. We drew Jonesboro High School, the top-ranked team in our brutal division and last year’s Empire runner-up. This team is the elite of the elite. They have won the Georgia State championships 10 times (4 out of the last 5 years). They are two time National Champions and won the Empire championship in 2015. Our Blue Devils split ballots with them, losing one and winning one and once again, the kids did not show an ounce of trepidation. Just absolutely amazing!

Our final round competitor was a team from Seoul, South Korea. We were on the ropes with a 2-4 record but our spirits were high. We reminded the kids we had a chance to leave Atlanta with a 4-4 record. This is outstanding for a first-year Empire team, particularly when you consider the highly competitive nature of our opponents and the fact that we have two freshman, two sophomores, two juniors, and two seniors. Our Reading kids once again rose to the occasion and won both of the judges’ ballots. We ended up 4-4 and in 16th place. A record of 5-3 and we would have been a top ten finisher.

In between trials, we scrimmaged, decorated and filled goody bags for low-income children and wrote letters to our military abroad. The kids networked and made new friends from all over the world and honed in on their litigation skills. They represented the Reading Community with dignity and pride. I only wish that you all could have seen them in action. They are real champions and this team is one I will never forget.

On behalf of the Reading Mock Trial team, I once again thank you for all of your support! 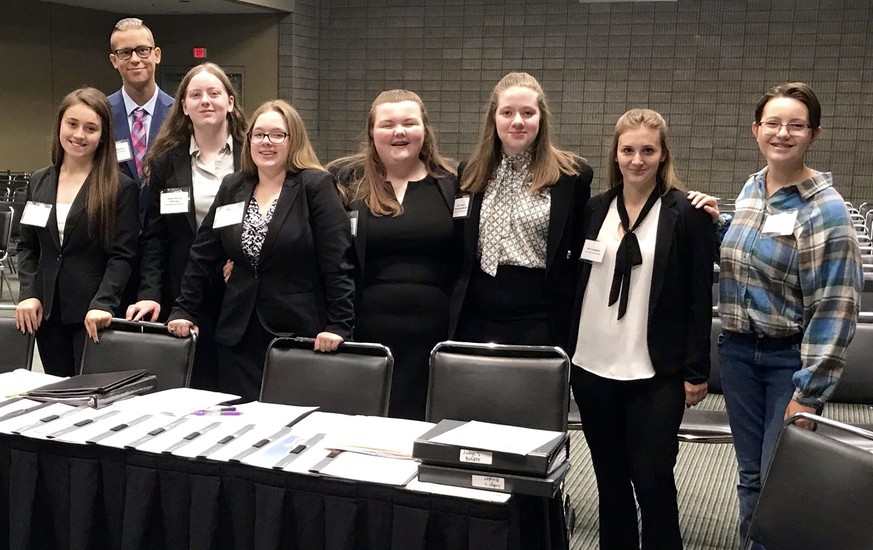 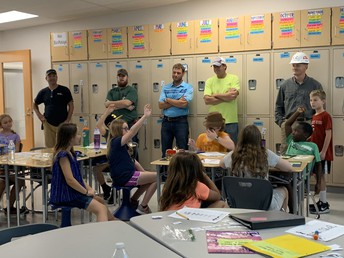 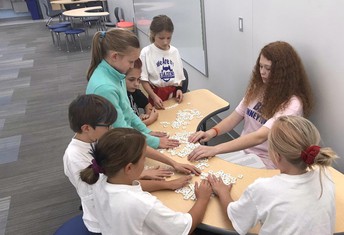 "The third graders love their time with Ms. Carly. She talks about the importance of reading and writing and how she uses these skills as a high schooler and in her everyday life," Mrs. Ernsthausen shared. "Our third graders look up to Carly and we can't wait to continue building our relationship for the remainder of the semester!

Carly is one of 28 high school students in Amanda Shinkle's Inclusive Tutoring class at Reading High School this semester. The student tutors are placed at all grade levels. Their responsibilities range from helping the teacher with the whole class, working at a center within the class, helping middle and high school special education students work on life skills tasks, working one-on-one with students, and helping the kindergarten and pre-k students at lunch.

"The response from the inclusive tutors and the teachers has been nothing but positive. Not only are the tutors being great role models for the students they work with, but it is also a very rewarding experience for the tutors," Ms. Shinkle said. 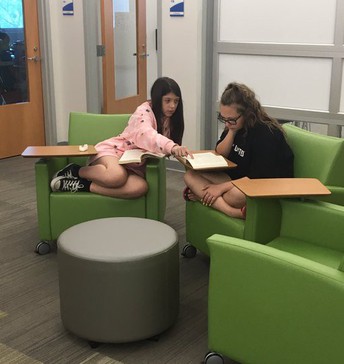 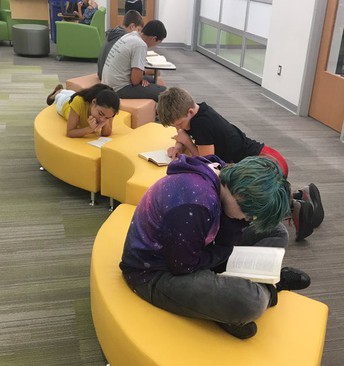 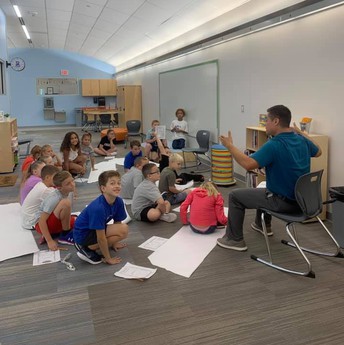 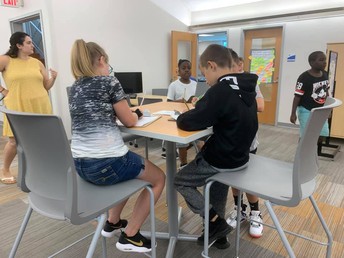 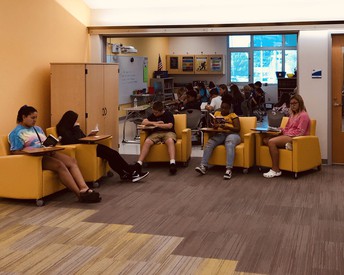 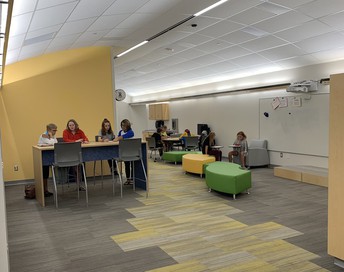 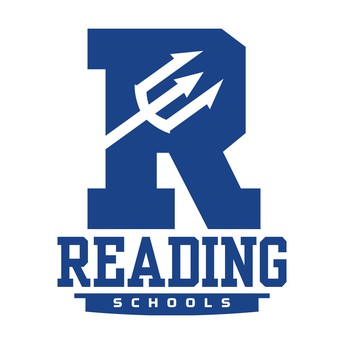 Meg is using Smore newsletters to spread the word online.