DEJS is using Smore newsletters to spread the word online.

Get email updates from DEJS:

An insight into the origins of written American History

An insight into the origins of written American History

Juan Gines De Sepulveda, often compared and contrasted with Bartolome De Las Casas, is a Spanish explorer that illustrates Native Americans as child-like, barbaric, and even as savages. Explaining to his fellow conquistadors that they are to the Spanish as "women are to men...children are to adults...and apes are to man." Sepulveda believed that these Native Americans were in need of civilizing and therefore took upon himself to not only civilize them, but also to invert them from various polytheistic denominations to Christianity. 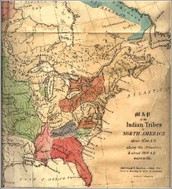 This map shows the difference between the northern and southern tribes. It showed how some were nomadic and some were sedentary.

Native Americans in the Southern part of North America were able to become semi-sedentary because they could grow maize. 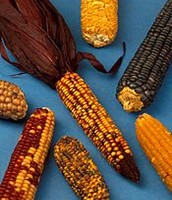 Corn became a staple in most Native American diets.

On April 21st of 1649, it was the second set of laws mandating religious toleration in the European-infested North American colonies. The Act granted religious toleration to anyone who believed in Jesus and the Holy Trinity, a.k.a. every sect of Christianity. Ironically the Act only gave toleration to those who practiced different sects of Christianity but didn't grant much if any toleration for other organized religions. One of the biggest reasons why the act was so controversial for its time (in spite of how much toleration it actually mandated) because hence the name Maryland, Maryland was very deeply planted in its Catholic roots. Page 121-123 discusses how many of the citizens of Maryland had some controversy with the Quaker colonies and Quakers settling into Maryland. 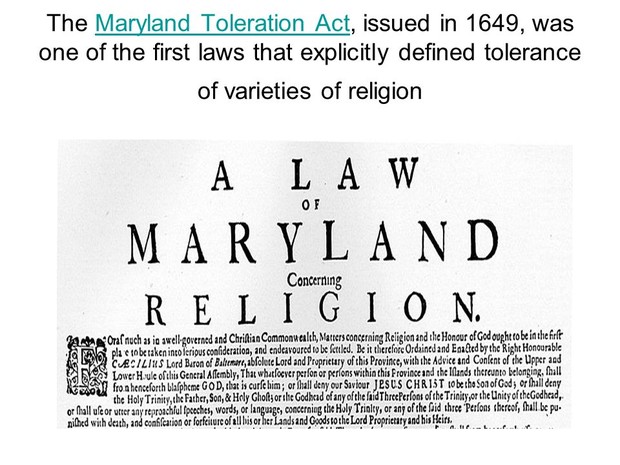 Some notable thinkers from the enlightenment include Francis Bacon, Descartes, Rousseau, Immanuel Kant, Adam Smith, Thomas Jefferson and Denis Diderot. The Enlightenment was so significant in 18th century European and American History because it showed both continents that they could think rationally and logistically rather than religiously. The Enlightenment as a whole could probably be best described as empowerment to empiricism and a gradual rejection of religious authority. Page 126 discusses how the Enlightenment made its voyage to America and its significant in both The New and The Old World. There were more significant thinkers that emerged during the Enlightenment in Europe than there were in North America but its significance lies more so in inspiring many American thinkers, including those listed above.

In addition to his education and interest in law, Thomas Jefferson, the third president of the United States of America was a patron of the arts and education for others. As a child of the Enlightenment, he had an appreciation of the force of religion in the western world throughout history and the resultant conflicts that occurred when one faith had virtual control over the body politic. He manifested his concern by pursuing legislation in the Virginia General Assembly for religious toleration. While traveling this course, and with Madison’s aid, he obtained legislation for religious toleration. However, it did not mention respect for other religions nor include all faiths. It did, however, help in the dis-establishment of the Anglican Church in Virginia.

Benjamin Franklin, one of the country's founding fathers (and the man to grace the cover of the hundred dollar bill) was a very insightful thinker inspired by the Enlightenment. Author of Poor Richard's Almanack, Franklin wrote a book filled with over 300 aphorisms (which are moral principles or accepted truths). Franklin contributed to the Enlightenment through philosophy, provocative thinking making bold reflections of the times and of human nature in general. Also in charge of the Pennsylvania Gazette, one of the most prominent newspapers of the time until 1800. 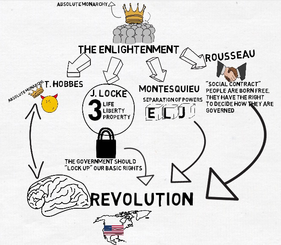 Britain wanted to maintain control of the colonies by enforcing new laws. These laws were inspired by mercantilism which is the idea that the colonies only purpose is to benefit the "Mother Country" (Britain). By this ideology, they created the Navigation Acts which forced the colonies to only export to England and other English colonies.
Some of the Acts include (pg 85):
-Staple Act (1673): Ensured enumerated imports only to England (Mostly Obeyed)
-Hat Act (1732): Prevent export or intercolonial sale of hats (Partially Obeyed)
-Iron Act (1750): Prevent manufacture of finished iron products (Extensively violated)
-Molasses Act (1733): Cut American imports of molasses from French West Indies (Extensively Violated) 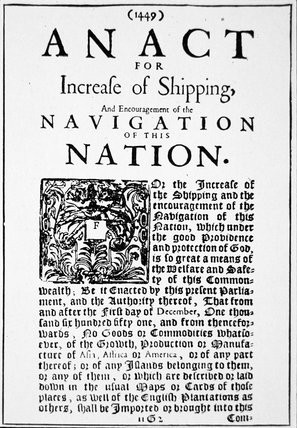 Reasons for the Growth of Slavery

Types of Slavery in the Americas

One of the first types of slavery used in the new world was the forced work of Native Americans by the Spanish overlords of the areas in South America. They were used to grow crops and make money for the governors of the area.

When the colony's were first established the wide use of indentured servants was used because they could charge them for the voyage to the new world and have to work of the charge. The indentured servants were usually poor, and were promised land if they completed a two year work on a plantation. Most died before the end of it and others never got the land promised. 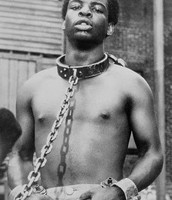 This type of Slavery is what many people think of when slavery is mentioned and lasted in america till the end of the civil war or when the 13th Amendment. The African people's were usually captured or sold in Africa going down the middle passage to the new world. This international slave trade ended in 1807.

Where Slavery Was in America

Through out the years america has grew so did the demand of slavery, but not all parts of america fully accepted slavery especially the northern states where slaves were to be free. However the people in the south began to rely economically on the slaves that produced and harvested all of their crops. The government also began dividing states based on north and south to allow slavery or not like in the Missouri compromise.

Growth of Slavery in the South

During the industrial revolution in america the north required lots of raw materials such as cotton to produced products from their factorys. The large demand required more slaves to be brought in or produced by the south to keep up with the demand of the north. When they brought in more slaves they also had more money to get more land to farm furthering a endless cycle of investing money in slaves to make more back. The slaves who revolted in the south (Bacon's rebellion) further increased the bad conditions that slaves had and the disconnect between the owners and what they call "property."

The Growth of Slavery [ushistory.org]

Prior to the Spanish Invasion of the Native American Lands during their conquest of southern America up to Mesoamerica, the native American people were a free agrarian society growing crops like corn, and trading with the other groups around them. The people believed in many god relating to nature whom they praised in order to get things like a good harvest.

The Invasion of southern America began with the Conquistador Juan De Onate's Invasion. The Spanish saw many opportunity in the new world along with the treasure they stole from the Native people they also saw it as a way to set up territory in a new land. 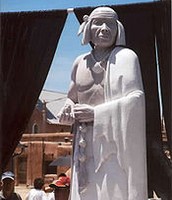 Pope was a Tewa Religious leader who led the PuebloRevolt in 1680 against Spanish colonial rule. In the first successful revolt against the Spanish, the Pueblo expelled the colonists and kept them out of the territory for twelve years.

Antonio de Otermin was the Spanish Governor of the northern New Spain province of Santa Fe de Nuevo México, today the U.S. states of New Mexico and Arizona, from 1678 to 1682. He was governor at the time of the Pueblo Revolt.

The Spanish empire at the time of the pueblo revolt was one of the most powerful empires at the time; militarily, politically, and economically. They were also one of the first Country to expand into the new world.

The main reason for the Pueblo Indians to revolt against the Spanish was, they were tired of the Christianity being forced on them when they had their own beliefs and if that was shown they would be punished. Another reason that thy revolted was the mistreatment that the Spanish did to them; Enslaving them, maiming, and destroying ancient cultural relics they had.

After the Pueblo Revolt

The Pueblo revolt resulted in the retreat of the Spanish colonists in the Native American territory, a win for the Native people, and the Spanish stayed out of the Pueblo Indians territory for twenty years. In 1692 however the Spanish came back with a invasion for wiping out any Resistance from the natives and gaining control of the area until the 1821 independence from Spain.

The Pueblo Revolt | The Gilder Lehrman Institute of American History

Smuggling to get around mercantilism

During the early 1700's, Britain practice Salutary Neglect which basically means that the English avoided strict enforcement of the Navigation Acts or any other law that was aimed towards the American Colonists. Most of the Colonists didn't took fond of the Navigation Acts as it hurts their business with the other European powers. Due to Salutary Neglect, colonists found it easy to smuggle (Illegally exporting certain trading items) in some specific goods from other countries. For example, due to the Molasses Act of 1733, American merchants smuggled French Molasses by bribing customs officials. 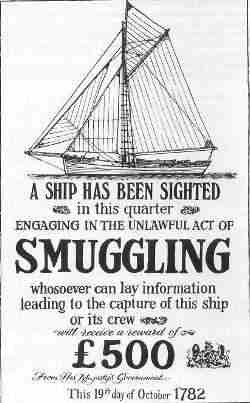 Smuggling to get around the Navigation Acts could be similar to the smuggling of alcohol during Prohibition which banned the sale, production and transportation of alcohol.

DEJS is using Smore newsletters to spread the word online.