victor is using Smore newsletters to spread the word online.

Get email updates from victor:

By: Kinsey McElhaney and Victor Lazo

By: Kinsey McElhaney and Victor Lazo

Crustaceans have specific characteristics that make them crustaceans. They have a bilateral symmetry and are omnivorous. Crustaceans have a strong and tough exoskeleton made of calcium and lack an internal skeleton. Their heads also has two compound eyes , two pairs on antennae , and three pairs of mouthparts.

Pistol Shrimp or Alpheidae are a type of shrimp that have asymmetrical claws , and with the larger claw they have the ability to produce a snap loud and strong enough to stun and kill much larger fish and even break glass jars.

Pistol shrimp have also been noted for their ability to reverse claws. When the snapping claw is lost the missing limb will regenerate into a smaller claw and the original smaller appendage will grow into a new snapping claw. Laboratory research has shown that severing the nerve of the snapping claw induces the conversion of the smaller limb into a second snapping claw. This phenomenon of claw symmetry in snapping shrimp has only been documented once in nature.

The Horseshoe Crab is a very unique animal because the shell actually covers it's entire body , these crabs are very closely related to arachnids and they have ten legs. Also this type of crab is one of the oldest living crabs on the planet , fossils from up to 450 million years ago.

Which crazy fact is a phony

3. Horseshoe crabs stay in the water their whole lives.

With long , segmented bodies and multiple limbs , remipedes look just like swimming centipedes. They even have large "fangs" which are speculated to inject venom into it's prey. They live deep down in underground saltwater aquifers. Because of their ugly appearance their family classification name is "Godzilliidae"

Underside of a Horseshoe Crab. 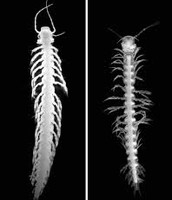 victor is using Smore newsletters to spread the word online.