Clara Barton was born on December 25, 1821, in Oxford, Massachusetts. When the Civil War started in 1861, Barton heard that Union Troops were suffering and dying because there were not enough bandages and other medical supplies. Starting in 1862, she herself worked as an unpaid nurse, nursing the wounded back to health. After the war ended she led a group to look for missing soldiers. In 1863 Europe also wanted to help wounded soldiers in battle. These people then made the Red Cross. In 1870 while Clara was in Europe a war broke out between France and Germany. Barton cared the wounded under the Red Cross banner. Clara Barton was head of the American Red Cross for 23 years. In 1904 she retired. She died on April 12, 1912.

What Clara was famous for

Clara was famous for The American Red Cross and helping wounded soldiers in The Civil War. 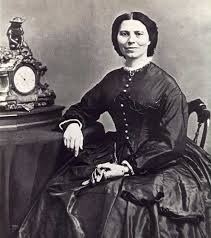