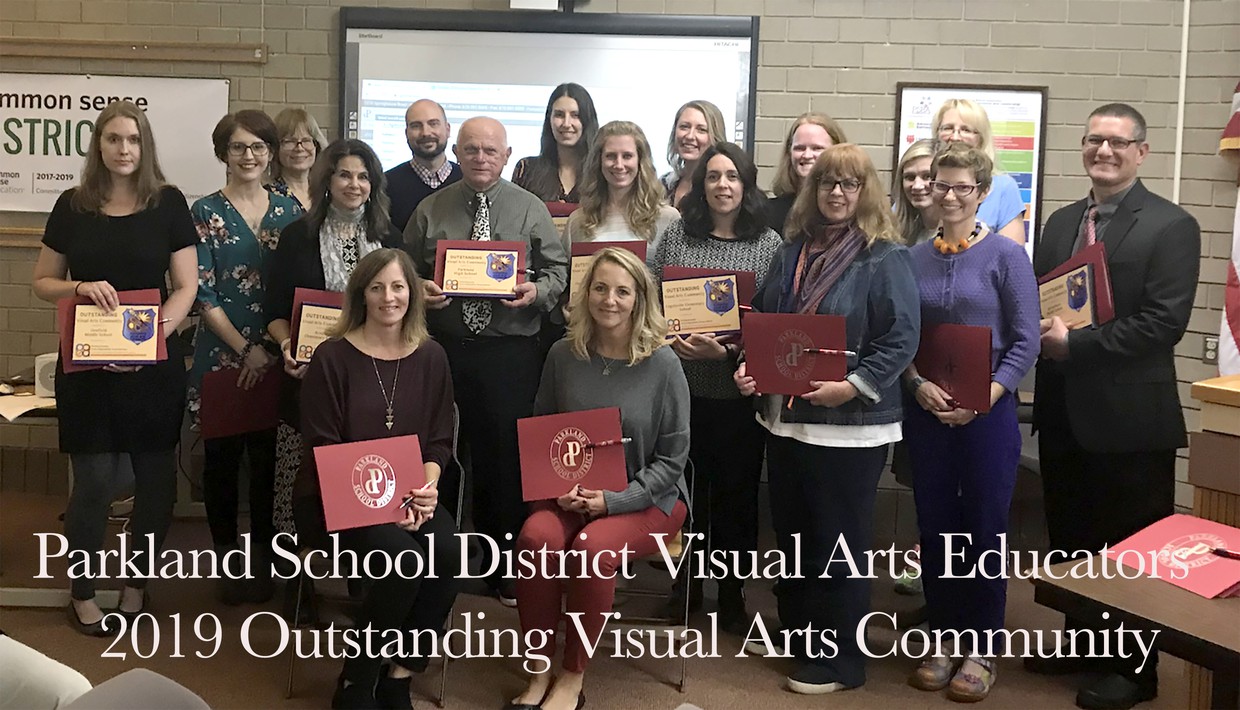 The Parkland Education Foundation hosted an art reception from 6-7 PM before the Board Meeting in recognition of the rotating art collection that is on display in the Administration Center.

Mark Stutz, Director of the Performing and Visual Arts, recognized the art teaching staff (pictured above) for winning the Outstanding Visual Arts Community Award which you can read more about here.

Carol thanked Lisa Ervin for creating the art reception for our community to see and appreciate the artistic talent in the district. She also reported that Harlem Wizards tickets are on sale for $10 at www.harlemwizards.com and MG raffle tickets are also available and the car will be raffled off at the game. The Foundation thanks New Tripoli Bank for a $10,000 donation last week!

Marie Maritch commented that CAC was great this past week with its focus on the College Planning process.

The CLIU met last night. Bob Bold reported that a survey was taken by students and parents and people are happy with services that are offered. They are adding three new positions to their staff. A person in Palmerton is building a facility that that the IU plans to rent as the current building is inadequate.

Bob Bold reported that the Legislature is back in Harrisburg as of yesterday. SB334 sponsored by Senator Argyle would severely restrict districts of the ability to appeal under assessed property. He is also a leader in the idea to eliminate property tax and in particular is trying to help senior citizens. Special Ed money is a concern and, on the national level, there is a push to increase national funding.

Linda Perlman-McKenna reported about the PSBA conference. She thought it was very worthwhile. She enjoyed the keynote speakers and all of the breakout sessions. Parkland staff presented a session about Career Readiness activities for high schoolers to a packed audience who asked lots of questions.

Rob Cohen will not approve thousands of dollars in cyber school payments as he feels these are tax dollars being wasted. Lisa is joining him there. David Kennedy agrees with Mr. Cohen, but unfortunately, the Board has been advised not to vote against the payments by legal counsel. If a majority votes against payments, we are penalized and money is taken out of our state contribution. School Board members have met with local representatives to educate them on wasted tax dollars to try and help change the law.

Patrick H. Foose addressed the Board to request that future Board Meetings be live-streamed to the community. The matter will be taken under consideration.

Lisa Roth said everyone was very proud that David Hein was named PSBA Vice President at the conference in Hershey, PA last week. The Board congratulated him on this appointment.

Everyone loved the art reception and David Hein mentioned that the Bus Safety Banquet was a wonderful event earlier this month.

Everyone thanked and congratulated Bob on his tenure at the IU and all he's done for students with disabilities. He's been a supporter and advocate of children for many years. We are going to miss him at the IU! Marie Maritch will proudly serve on the Board of Directors starting in December.

Congratulations to all of the National Merit students.

Follow Nicole McGalla
Contact Nicole McGalla
Embed code is for website/blog and not email. To embed your newsletter in a Mass Notification System, click HERE to see how or reach out to support@smore.com