Terrie is using Smore newsletters to spread the word online.

Get email updates from Terrie:

It may be a surprise to learn that one of the founding revolutionaries of the United States of America was a swim instructor and an adult-learn-to-swim advocate.

"I cannot be of opinion with you that 'tis too late in life for you to learn to swim," said Benjamin Franklin, who was also inducted into the International Swimming Hall of Fame. I think the Swedish Fish would agree with Poor Richard. In fact, a number of swimmers on SWED learned to swim as adults.

If you read Franklin's autobiography, you will come across the word "swimmingly" when he describes leading an industrious life while getting his printing business off the ground.

"We swim for life!" is the Swedish phrase "Simmar for livet!" underneath the SWED logo. The double-edged meaning -- a life-long swimmer and swimming to live -- evokes a Franklinesque ethos: work hard, as swimmers do, and all will go swimmingly.

The Swimmingly newsletter will work hard to fulfill the mission of our team: Building relationships through swimming. It's a newsletter of, by and for swimmers. We want all of you to contribute your ideas, energy and talent to it.

If you'd like to share a favorite swim adventure, a photo, a poem or recipe, this is your newsletter. Everything swimming and swimming related -- from adult-learn-to-swim lessons to the 2020 Olympics to water quality -- is welcome.

The newsletter's regular features include a column, "Coaches' Corner," a portrait of a new team member called, "Meet a SWED," an events calendar and a link to the practice schedule. The plan is to publish every two months, six times a year.

Volunteers welcome and wanted! Email me at tgalban2@gmail.com. 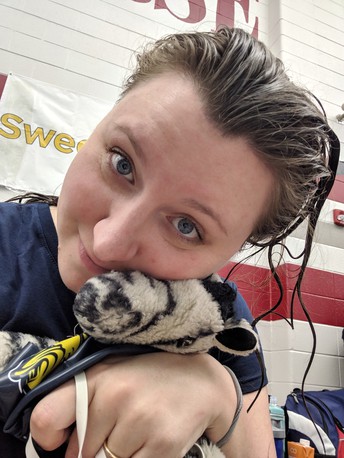 Meet Sable Söderlund our own Swede on the Swedish Fish! Söderlund is her maiden name, which she used during her swimming career. On our team she is known by her married name, Sable Bray.

Sable began swimming in the community pool at the age of six. Her father saw her swimming and wondered where she had learned to swim. Sable said she was just copying what she saw on TV and mimicking “The Little Mermaid.” Sable began lessons at the YMCA where she quickly excelled and was promoted to the swim team, North Coast Aquatics, in San Diego. She swam with them until she moved to Sweden at age 11.

This was a big transition for Sable, but swimming helped her acclimate to a new environment. She said, “Even though I couldn’t speak Swedish yet, I was swimming with a team.”

At 12, Sable’s coaches began to condition her for long distance swimming. She was the only long distance swimmer on her team and qualified for the junior Olympic team for both the 800m and 1500m at 13. Unfortunately, that same year, the Olympic committee deemed the 1500m to be a male only event, so she was unable to participate.

Sable moved back to the United States for college in Florida at Embry Riddle Aeronautical University, where there was no swim team. She swam occasionally with Daytona Beach Masters where Olympian Ryan Lochte's father coached at times. However, Sable found that she couldn’t keep swimming with her demanding school schedule. After graduation, Sable moved to Atlanta with her husband where she swam with an eight-member local YMCA Masters team.

Five years ago Sable and her husband moved again, this time to Chicago. Here she began her career as an aircraft dispatcher, and she began her search for a new team, swimming with CAC and the Smelts. Then a friend told her about Swedish Fish.

Sable claims that the Swedish Fish is the best team that she has been on in her adult life. She says the team is friendly, welcoming, supportive and caring. While Sable struggles between work and swimming, she always finds that coming to practice is enjoyable and time well spent with teammates and coaches.

“Being a Swede myself and having swam in both Sweden and the U.S. -- it's just the perfect fit!” she said. 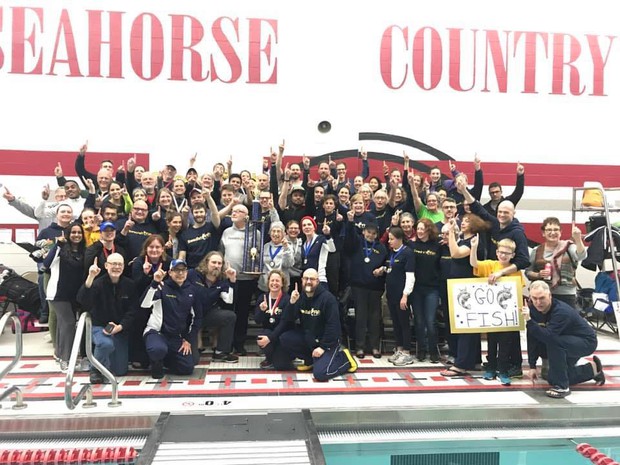 Swimming our way to our first championship 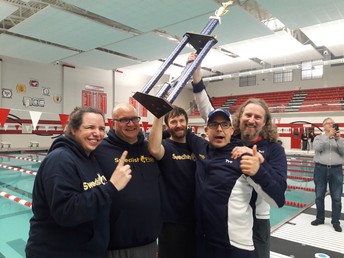 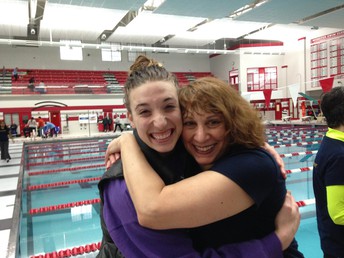 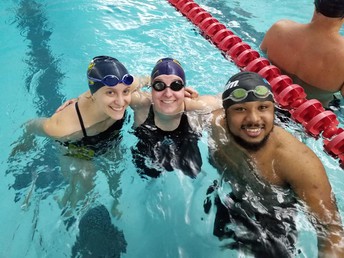 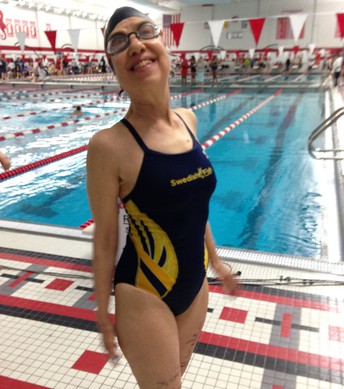 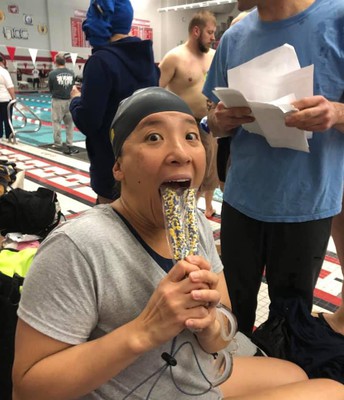 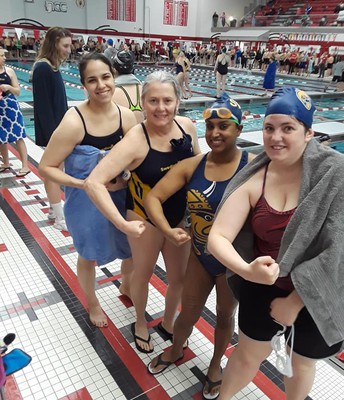 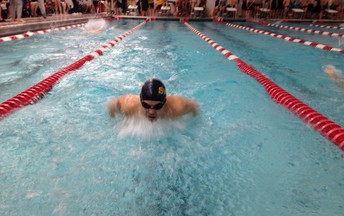 The 2019 Big Shoulders swim was the most special I have ever experienced in the last 10 years. Andy Holck and I were guides for Heidi Musser, who has been blind from birth. This swim made me realize how special it is to be part of the Swedish Fish community. With this team working together and serving each other, it is bigger than any trophy we could ever win.

I am thankful everyday for the team we have built together and proud to be part of this organization. Let’s continue our mission to build relationships through swimming in the upcoming year!

All things we focus on and do are tied to our mission: building relationships through swimming. Building a culture of acceptance is at the core of who we are, and something that makes this team special.

Part of developing your fitness is to come up with a regular practice routine and stick to it. Showing up to practice and putting in the work in the pool will go a long way.

During the fall we build our foundation and focus on technique. Go to as many of the fall clinics that you can.

Most of all -- have fun training with your friends. We are adult masters swimmers, and we are doing this because we have fun doing it!

The conclusion of Big Shoulders open water race signals the beginning of a new season. The 2020 short course season begins September 2019 and runs through the beginning of April 2020 with the state meet on April 3-5. Our first meet will be the Libertyville Sink or Swim on Nov. 3, 2019.

I am excited about the upcoming season. I hope everyone begins to make their way back to the pool. It's time to begin building your training foundation!

Save the date! Halloween party fundraiser 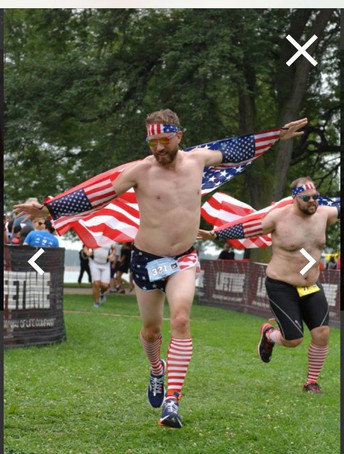 Or $45 for just Wednesdays, $60 for just Saturdays

No cash on deck, Fees should be paid using Chase QuickPay or Venmo to ChicagoSwedishFish@gmail.com. Or checks can be sent to: Swedish Fish NFP, 6602 N Harding Ave, Lincolnwood, IL 60712

(Check team website and emails for confirmed dates and times.) 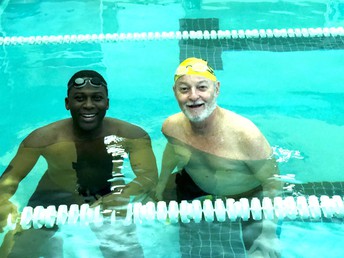 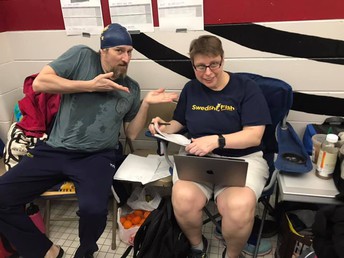 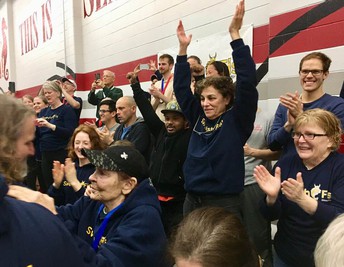 We like to describe our team, not as a group of outstanding athletes first and foremost (although we are, to be sure!), but as a community, or a group of like-minded people that come together around swimming. Swimming is a tool to cultivate relationships between and among us. Our parties are legendary, and we often joke that we swim so that we can eat well.

We look out for each other. Need a ride? No problem. One of your teammates will make sure you get there safely.

Celebrating a child's birthday or a career milestone? A Swedish Fish is bound to offer help to throw a party or take you out to celebrate.

We are there for each other when things get challenging, too. When a loved-one is sick, post-surgery, or medical treatment, Swedish Fish families will bring meals, share stories, jokes and are there to just listen and support.

There are no limits to what we can accomplish together. We are Illinois State Champions! And we did it not because we are necessarily the fastest and most ambitious team, but because we nurture a large group of swimmers who are from all different age ranges, abilities, and backgrounds.

Our bench is “deep” because we welcome everyone to be a part of this community—working together to stay healthy, get fit, and compete for the love of the sport.

We embrace the hashtag: #SwedishFishNoLimits. 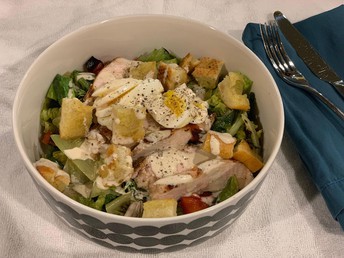 1. Marinade the chicken in one part olive oil, one part white wine, and a few red pepper flakes in the fridge for at least one hour and up to overnight.

2. Make the croutons by slicing your favorite bread into thick slices. Toast in the oven or in a cast-iron skillet with olive oil, salt and pepper to taste. Use bagged croutons to save time, or serve with toast!

3. Fire up the grill. Place the red peppers on the grate and let burn for several minutes, turning over periodically to get an even char. Remove from heat and let steam while you prepare the rest of the ingredients.

4. Grill the chicken breast, carefully grill-marking them on each side until the internal temp reaches 165 degrees, remove from heat and rest for 10-15 minutes.

5. Cut the romaine hearts in 1/2 the long way and rub olive oil, salt and pepper on both sides. place on the grill for only 1-2 minutes per side just to mark the leaves a bit. Remove and chop into small pieces. Chop the roasted red peppers into a large dice.

For the "Cesar" dressing:

6. Add all dressing ingredients to a bowl and mix with a whisk to combine.

7. Place the lettuce and peppers together in a large bowl, add the dressing and toss until dressed to your liking. Divide into smaller serving bowls. Slice chicken breasts and place chicken on top of salads. Slice hard-boiled eggs and place on top of salads evenly. Drizzle a bit of dressing on top and serve with toast or croutons and Parmesan cheese if desired. 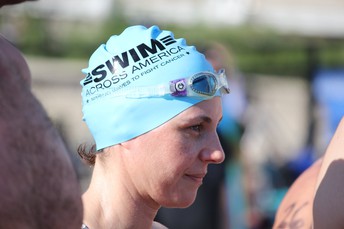 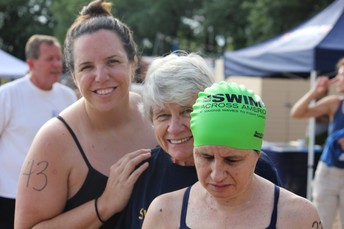 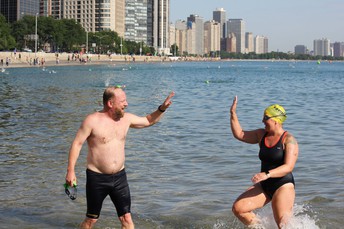 Swim Across America: SWEDs raised spirits and $12,675 for cancer research, prevention and treatment 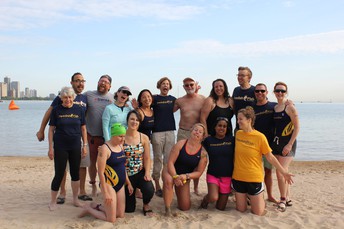 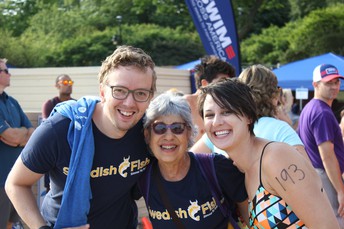 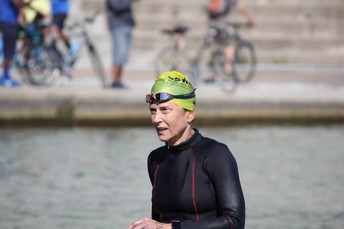 Terrie is using Smore newsletters to spread the word online.