jasmine is using Smore newsletters to spread the word online.

Get email updates from jasmine:

.Nelson Rohlihlahla Mandela was born in Mvezo, a small village near Mthatha in the Transkei on July 18th, 1918, to Nonqaphi Nosekeni and Henry Mgadla Mandela.

.Nelson Mandela has been married three times, he had six children, four girls and two boys.

.Three of his children passed away, 1 girl and 2 boys. Makaziwe died as an infant in 1948, Madiba Thembekile died in a car accident in 1969 and Makgatho Lewanika died of an aids related illness in 2005. His surviving children are Pumla Makaziwe, Zenani and Zindziswa.

.His father was the principal councillor to the acting paramount chief of the Themubu, but unfortunately he died in 1927.

.He attended a primary education at a local mission school, where he was given the name Nelson, he was sent to the Clarkebury Boarding Institute for his Junior Certificate and then to Healdtown, a Wesleyan secondary school. He then enrolled at the University College of Fort Hare for the Bachelor of Arts Degree where he was elected onto the Students representative council.

.Mandela also dreamed of making his own contribution to the freedom struggle of his people.

He fought for freedom, racism and black rights, and spent 27 years in prison fighting for the cause he believed in. The era of apartheid officially came to an end on April 27, 1994, when Nelson Mandela voted for the first time in his life, along with the people supporting him. Nelson Mandela was elected as President of a democratic South Africa on May 10, 1994. Mandela retired in 1999 after one term as President. He has now set up three foundations carrying his name: The Nelson Mandela Centre of Memory, The Nelson Mandela Children’s Fund and The Mandela Rhodes Foundation. Nelson Mandela accepted the 1993 Nobel Peace Prize (along with FW de Klerk) on behalf of all South Africans who suffered and sacrificed so much to bring peace to his land.

Nelson Mandela fought for his own people and their rights by delivering/presenting speeches all around the world. First he used protest methods like strikes, civil disobedience and non cooperation. Mandela turned to violent acts when the government banned the ANC, instead of giving up the fight against apartheid. Before going to prison Nelson Mandela said a speech in court quoting " I am willing to die for my cause" His supporters campaigned against apartheid for Mandela while he was in prison. The government couldn't take any more of the struggle, so they offered Mandela a release if he would in favour stop the anti-apartheid campaigners. Mandela did'nt accept this offer, he said he will not leave prison unless apartheid is stopped. Eventually the government agreed, Mandela was released.

Blacks gained the right to vote, Mandela was elected president, he could then put blacks rights into use, let black and white people in South Africa live together in peace and freedom.

Mandela Day is to inspire individuals to take action to help change the world for the better, and in doing so build a global movement for good. Ultimately it seeks to empower communities everywhere. " "Take action, inspire changes, make everyday a Mandela day.”
Get Directions

I think that Nelson Mandela is a famous and well known activist. A lot of people support and look to him as he has changed the world by bringing the blacks and whites together as one.

" Everyone will live equally" Nelson Mandela has fought and sacrificed a lot including, his family and his friends for his people and their beliefs, I think Mandela is a man that fights for equality, freedom and peace. 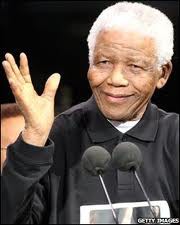 jasmine is using Smore newsletters to spread the word online.

Follow jasmine tawa
Contact jasmine tawa
Embed code is for website/blog and not email. To embed your newsletter in a Mass Notification System, click HERE to see how or reach out to support@smore.com
close