What does it mean?

The Dictionary.com definition of gilded is "having a pleasing or showy appearance that conceals something of little worth." How this applies to the era in question takes more thought. After the Civil War there was a significant influx of immigration to the United States. Although, they believed that moving to America could lead to a chance to make it big, it usually brought them abusive labor and terrible living conditions, thus lauding to a gilded item.

The Republican Party needed to recover from the embarrassment that was Johnson's presidency. So, they nominated Grant who was able to easily win against his opponent, Horatio Seymour, with little to no campaigning. This was due to the "bloody shirt campaign" that the Republicans utilized that reminded the nation that a) Grant was a war hero and b) the Democrats were southerners, the ones that caused the Civil War, and should not be trusted in Politics.

Uneducated immigrants left them selves open to abuse in the workplace and in their homes. This resulted in many morally challenged individuals to become some of Americas first self made millionaires. One individual who came upon money in a deprived fashion was William Tweed. Tweed earned 200 million dollars by way of bribery to acquire kickbacks and appointing individuals to office to acquire favors. The public mostly viewed him in a positive light, mostly because much of the public were uneducated immigrants. When news broke out of Tweeds corruption, the immigrants tended to stay in the dark because of their inability to read. Luckily a man named Thomas Nast created many political cartoons depicting Tweed's wrongdoings that anybody could understand, thus destroying his popularity. 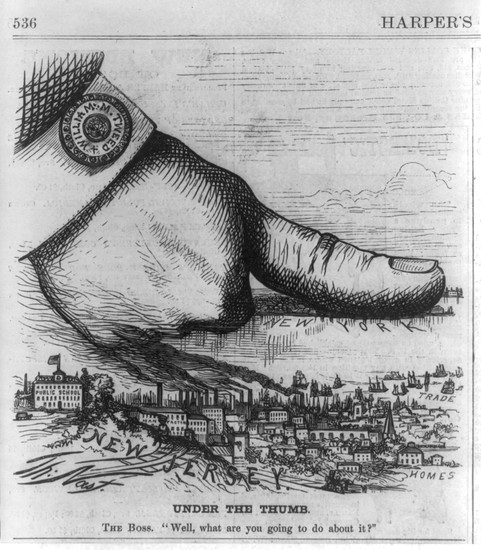 After Grant, Hayes was up as the nest Republican nominee, running against Tilden. Hayes won the election, but democrats believed that foul play was at hand. So, they threatened an armed march on Washington. To avoid this a compromise was made that stated the Democrats would accept Hayes as president so long as: