where the law is interpretted

where the law is interpretted

All states have at least one district court, though some have more. This court holds original jurisdiction, and thus has the authority to here a case for the first time. These courts hold civil and criminal cases, and are the only federal courts with witnesses and juries. Each district has at least 2 judges, and there are 94 district courts.

That is a picture of the Charlotte district court house from www.ncwd.uscourts.gov.

The Court of Appeals

If unsatisfied with the outcome procured by the District Court, a defendant may appeal to the next higher court, the Court of Appeals. These courts review decisions made by lower courts, and come up with one of three results:

Appeals courts neither hold trials nor have witnesses nor determine guilt, innocence or which side wins in a suit; rather, a panel of judges reviews the case records and listens to both sides arguments and determines if the trial was fair and protected the everyone's rights. Each appellate court has between 6 and 27 judges, and there are twelve courts of appeals, each covering a circuit. There is a thirteenth court of appeals for the federal circuit which is nationwide.

Officials of the Court:

Every judicial branch has a US marshal. The marshals protect jurors, serve warrants and subpoenas, and provide order to the court. They also make arrests, collect fines, and take convicts to prison. 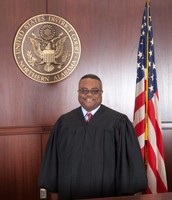 A magistrate judge initially decides if a suspect will be held in jail or given bail, and whether a case should go to trial. Each district court has a magistrate.

A US attorney represents the interests of the US in civil cases involving the government. Every district court has a US attorney. The attorney is a lawyer who prosecutes people accused of breaking federal law.

And the HIGHEST Court is ...

The supreme Court consists of 9 justices appointed by the president and approved by the senate. Presidents often approve justices of their own party to make a lasting impact on the nation after they cease being president, because justices serve for life. This means that once appointed justice, he or she may remain justice as long as it pleases him or her. However, a justice may be impeached. Even though most appeals court decisions are final, the supreme court does see a few cases appealed from the appeals court, if they seem important enough, as well as cases involving other nations, habeas corpus, and cases between states.