The Birth of Hollywood

The Birth of Hollywood

To be clear, Hollywood is not actually a town. It’s a district of the City of Los Angeles, California. The area known as ‘Hollywood’ today started in the second half of the 19th century as just another suburb of Los Angeles. Developed between the 1880s and the early 1900s, Hollywood takes up a space of 500 acres. The area is designed as a quiet, upperclass neighbourhood where the wealthy, the high rollers and the fat-cats can live in luxury. To advertise this wonderful new part of town, an enormous sign is erected on the hills overlooking Los Angeles.

Moving pictures started as an experiment at the close of the 19th century. By the first decade of the 20th century, people were beginning to hear about these new moving images and the possibility that they held for entertainment. Film studios were small concerns, few and far between. Films were cheap thrills. You could go to a simple cinema in town and pay five cents to watch a short flicker-show…which almost literally coined the term…‘Nickelodeon’.

But by the 1910s, interest in the filmmaking industry began to grow as people saw the potential of this new technology, and Hollywood would be there every step of the way.

The year is 1912. Hollywood is about to take off. Two years previously, the first film ever made in Hollywood went on show. It was just seventeen minutes long. A far cry from the three-hour-long, multipart blockbusters we know today. But it was a start. In 1912, the first official film-studio opened in Hollywood, called Nestor Studio. The first official Hollywood film, made in a Hollywood studio, would come out two years later in 1914, directed by one of the legends of the Golden Age of Hollywood. His name was Cecil B. DeMille.

The Golden Age of Hollywood

During the 1910s, Hollywood was still making a name for itself. Although film was becoming more widespread, it was still in a rather rudimentary state. The idea of film credits were only just being thought-of. It was only once cinema had a firm foothold as an entertainment medium that people decided it might be a good idea to add lists of details before and after films, so that people could tell who produced, directed and starred in the various films then rolling across the screens of the world.

The 1920s saw the rise of Hollywood. The first stars were born. People like Harold Lloyd, Charlie Chaplin and Rudolph Valentino. Films during these early years were crude. Without the benefit of synchronised audio, actors relied on exaggerated body-language and close-ups of facial-expressions to convey emotional messages such as anger, frustration, horror and comedy. Intertitles, a staple of films of this era, conveyed important information to the audience such as important bits of dialogue, scene-changes or important story-elements.

Many terms used in the film-industry today survive from this early era. Today, a ‘flick’ is a feature film or a ‘movie’. A ‘film’. ‘Flick’ came from the propensity of early images to flicker across the screen as the film-reels rolled over the projection-lights. ‘Movie’ naturally comes from the bigger word ‘moving picture’ and ‘film’ from the delicate and highly combustable cellulose nitrate film that early films were produced on – So flammable that it was against the law to carry film-reels on public transport due to the immense fire-hazard. The very word ‘Cinema’ comes from the larger word ‘cinematograph’, an early form of projection camera. If the film produced wasn’t good enough, then the editor would take out a pair of scissors, slice off the bad film and splice the good bits of film together to make a complete reel – Anything not up to scratch literally ended up “…on the cutting-room floor”.

Despite technological shortcomings, films were being produced with amazing speed in Hollywood during the 1920s. Up to eight hundred a year during that decade alone. Most of them were short, one-reel flicker-shows, but the idea of the ‘feature length film’ was beginning to gain ground. The first feature-length film was actually produced in Australia in the early 1900s, and was about the famous Ned Kelly gang…Hollywood had a bit of catching up to do!

Due to the lack of audio, many early picture-houses featured a piano (or if they could afford it, an organ) to provide musical accompaniment. Most music was generic, written to provide a background to various filmic situations – Love-scenes, dramatic fights, light relaxing music for summer days, scary, dramatic music for stormy weather or horror films…Only the really big-budget films had musical scores written specifically for them. Cinema pianists had to be the best of the best, to accompany the film exactly in-sync for the music to work with what was being portrayed on screen. One of the most famous silent-film organists was the late Rosa Rio, who died in 2010. Playing the piano from the age of seven, her musical career ran for over a century (that’s right, 1909-2009). She started out as a silent-film pianist, then she moved to radio, then to television, providing some of the most famous theme-tunes ever known, such as the haunting and slow organ music that accompanied the opening of every episode of the famous radio-program, ‘The Shadow’.

The most famous thing about Hollywood is of course, the Hollywood Sign. It was created in 1923 as a real-estate advertisement and originally read “HOLLYWOODLAND” and was lit up by thousands of lightbulbs at night. Only designed to be up there for a few months, no thought was given to its preservation and it was allowed to deteriorate for over twenty years until it was partially renovated in 1949. By then, the weather had damaged the sign so badly that the decision was made to remove the last four letters, leaving simply ‘HOLLYWOOD’. 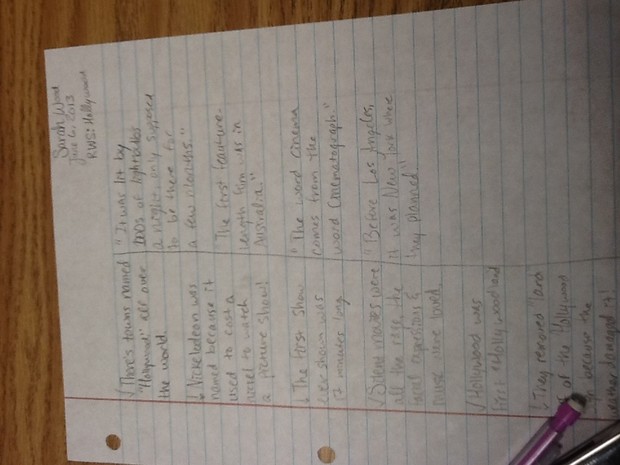 1. How would you compare "old" Hollywood to "new" Hollywood?

2. Why do you think the first picture show was so short?

3. What did the author say was difficult about making silent films?

4. What are some things that made "old" Hollywood so special?

5. Would you rather have the Hollywood we have now or the old Hollywood?

6. What would you suggest new Hollywood could do to bring back the feeling of okd Hollywood?

1. Old Hollywood didn't have the advanced technology we have now, many of their presentations were short as well.

2. The first picture show was probably short because they hadn't learned just how to make them longer. They didn't have the education or technology yet.

3. It was complicated to have music in the background, and quite expensive. And because you couldn't hear words, the facial expressions had to be spot on.

4. When old Hollywood came out, it was brand new. It was special to see something like that come to life. Hollywood was quite a bit classier before too. You could look up to actresses and singers as role models, now a days, there's trouble in Hollywood. And too many bad influences

5. Old Hollywood was only a nickel to see a feature, that would be very exciting. Also, the movies now can be overly inappropriate or too over the top with technology. In fact, many of the movies today are remakes of older movies! But old Hollywood would have many silent movies and I prefer talking. I also enjoy scary movies which were harder to make in the 1910-1920s.

6. Hollywood now could try making silent films or simple films without all the over the top madness. Maybe they could have drive-ins or lower the prices. (Highly unlikely)