Alexander Graham Bell was born in Scotland in 1947. He was a famous scientist and an engineer.

He invented the telephone in 1876.and he didn't get the middle name Graham till he was eleven bell became a excellent piano player at a young age.

When he was 23 Bell and his parents moved to Canada where he studied the human voice.

On February 14 1876 Bell and electrical engineer named Elisha Gray both filed patents with the U.S patent office covering the transmission of sound telegraphically.

There is debate about who got there first but the patent was a warded to Bell. Bells first words with the working telephone were spoken to his assistant Watson.

we will rock you by QUEEN with lyrics 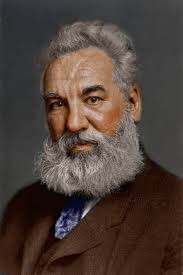