Aries is using Smore newsletters to spread the word online.

Get email updates from Aries:

his version of the model 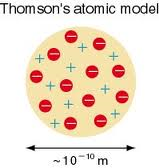 he described it as being like plum pudding.. he said that the circle yellow part is the pudding and the electrons as raisins.

research of the model

his research was more less finding the electrons in the model after they said that is was empty and nothing in there.

Aries is using Smore newsletters to spread the word online.

Follow Aries Conley
Contact Aries Conley
Embed code is for website/blog and not email. To embed your newsletter in a Mass Notification System, click HERE to see how or reach out to support@smore.com
close