Sixth Form students have returned to school with a new sense of vigour in anticipation of the work that lies ahead of them in the term to come. Sixth Form end of term reports will be issued on Friday 13 January, and students are already preparing for the mock exams which will be immediately after the half-term holidays, in the week from Monday 20 February. Mock exams will be held for most subjects for both Year 12 and Year 13s. A timetable will be produced shortly and sent to parents via this bulletin.

It was wonderful to welcome back some of our summer leavers earlier this week, who returned to collect their exam certificates. They were full of stories of their new experiences, be they at university, or gap years or in employment and it gave us real pleasure to know that they were all doing so well.

Wishing you all a very happy New Year.

After six years of service as Headteacher of Claires Court Nursery, Girls and Sixth Form, Paul Bevis has decided to move on from his work at the School at the end of this current academic year in July 2017. Paul has made an immense contribution to the School during his time with us, including the development of the Claires Court Essentials approach to teaching and learning.

The Principals wish to thank Paul on behalf of all the pupils, parents and staff of the School for his enthusiasm, commitment, hard work and above all interest in the development of every child in his care during his time in leadership at Claires Court, and he will be leaving the school very well placed for the future.

We are now actively working to prepare appropriately for his succession with effect from September 2017 and expect to confirm arrangements later this term.

Paul Bevis said, “This was not a decision made lightly. There is no doubt, that what will be six years in my role, will have been the most fulfilling, energising and enjoyable time of my professional career. Each morning it is a joy to greet pupils and students as they enter school, and to share with them their triumphs and tribulations. I am surrounded by colleagues who work unstintingly, creatively and with a huge amount of care for the pupils and students in our school. However having spent 43 years marching to the drum of the school day and annual school terms it is time to take more control of my time and have the flexibility to undertake projects and work more of my own choosing.“

The summer leavers returned to us on Tuesday 3 January to collect their certificates and let us know how they were getting on since they left Claires Court Sixth Form. It was lovely to see how well they were doing and they were very enthusiastic about their new lives at university, work or on their gap years.

Premiere of "The Tragic Tale of Harry Donovan"

"The Tragic Tale of Harry Donovan" premiered at the Claires Court Shed Theatre on Tuesday 20 December. The story of Harry Donovan was created by three of our ex-students, Sam Gipple (Director), Tom Clarke, (Screenwriter) and Michael Robertson (Special Effects Co-ordinator). Many of the cast were also ex-students and teachers at Claires Court. The audience were highly appreciative of this short film with its dark message. It is hoped that they will be able to show this film at several film festivals in the future. Smart Wolf Productions was founded by Sam Gipple in 2011, and his company creates and distributes films for the new generation through the internet. Expect to hear more from these talented young filmmakers. 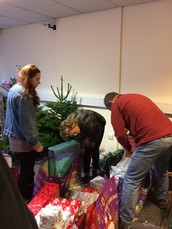 Hundreds of gifts were donated by local companies and retail stores, wrapped and individually labelled, for girls and boys of all ages as well as for adults. It was a festive morning and all that helped felt privileged to have been involved.

Sue Brett and the rest of her team are relentless in their practical help, support and kindness to every single person that comes to them in need. They continued this work throughout the period leading up to Christmas Day and more of our students helped out to ensure all the presents, hampers and cards made it to the right recipients.

The Sixth Form and staff also helped to make Christmas a little brighter for some FoodShare recipients by filling some glass jars with Christmas cheer, lights and chocolates, as you can see. 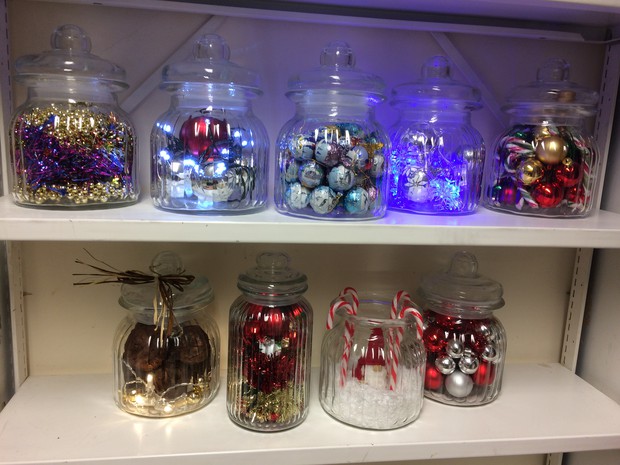 Although it seems like a long time ago, the Sixth Form celebrated Christmas early at Magnolia Park with a very successful Eighties / Fictional character themed party. Great fun was had by everyone, and a selection of photographs can be seen here.

Some of the best universities in Australia, Canada, USA, New Zealand and Europe will be on line and available to chat with students on Tuesday 10 January.

- Speak to universities from all over the world, in real time.

- Discover a broader range of options for their higher education.

- Join a virtual networking area and have all their questions answered.

at the link below where you and the students can learn more about this unique event.

This huge event takes place only once a year and is a very good opportunity to learn about excellent international study abroad opportunities available for UK students direct from the most reliable sources - Governments and University representatives.