Community Partners Serve as 'Principal for a Day' 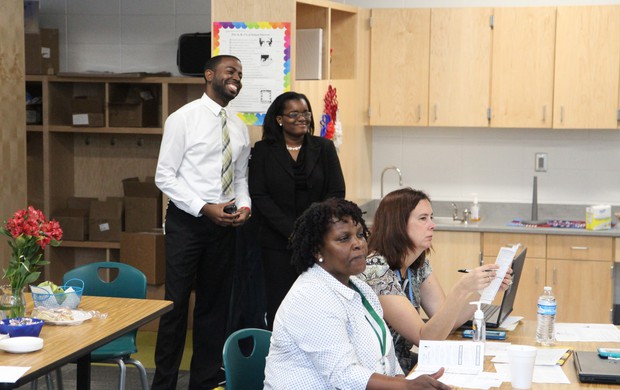 Earlier this month, community partners came to spend some time in each district school as a "Principal for a Day." As part of this effort, these business and community leaders took part in meetings, classroom lessons and principal observations.

Dr. Cleveland Johnson, principal at Veterans Elementary School, said that his day was a "shared learning experience" with Amber Maynard of Hicks and Sons Funeral Home.

"I enjoyed sharing with Ms. Maynard both the instructional and operational aspects of the principalship," he said. "Additionally, we engaged in discussions about the needs of schools and students from the perspectives of an educator and a business woman."

"We had the privilege of serving as #PrincipalForADay at several @BibbSchools schools. What an awesome opportunity!"

The Bibb County School District would like to take this opportunity to thank all the stakeholders and community leaders who took part in this worthwhile event!

Roy Bibb, MidSouth Community Federal Credit Union, and other Principals for a Day, with Dexter Martin and school leaders 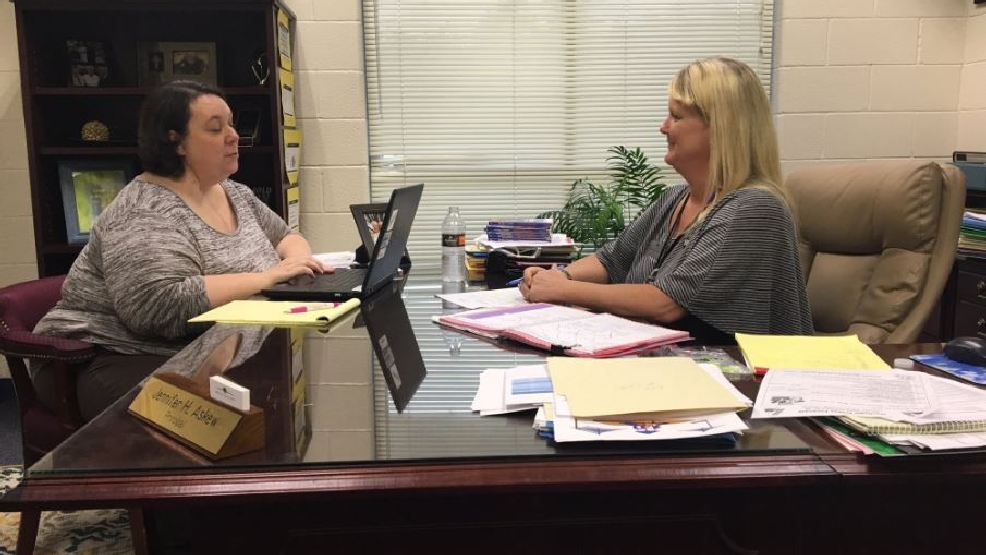 Guests become 'Principal for a Day' in Bibb Co.

wgxa.tv
MACON, Ga. -- Bibb County schools each had a guest from the community visit as Principal for a Day on Wednesday.Guests got to follow the principal around during the school day to see the challenges they face and what they do on a daily basis.The goal was f 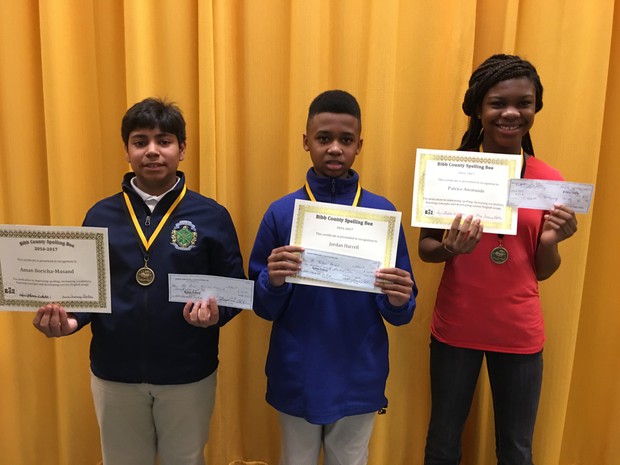 Best of luck to these talented students, and congratulations to all who participated! 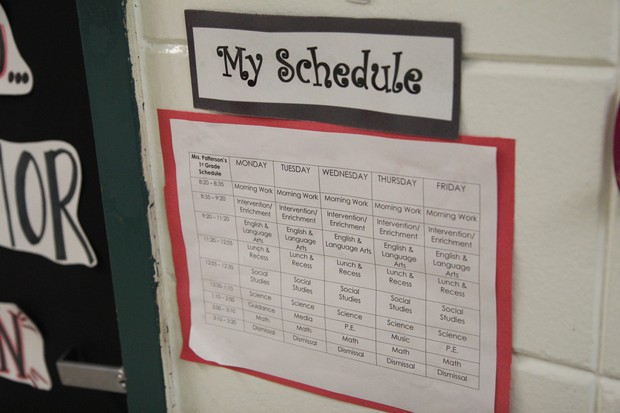 The effort comes after an analysis of last year's schedules reflected that the times varied from school to school. For instance, the time spent on reading ranged from 65 to 120 minutes across the District.

"It really varied in all of our subjects," Dr. Kilcrease said.

This year, each school was given guidelines for each subject, and then teachers filled out time logs over a four-day period last semester to be analyzed by District Management Group (DMG). That organization has provided feedback and data, which will be used by the Teaching and Learning Department to help maximize classroom time, particularly when it comes to core subjects like reading and math.

"We're hoping to give the teachers the time that's needed to provide good, quality instruction in those areas," Dr. Kilcrease said.

The data from DMG isn't the end of the story, though. Dr. Klcrease and her staff will continue to observe what's going on in schools to be as efficient as possible. Recently, they determined that elementary classrooms were on schedule in almost 95 percent of the 500 or so visits they made.

Dr. Kilcrease also said she knows that there are improvements to be made to the guidelines, which currently call for 15 minutes of recess. She'll continue to hold focus groups with teachers and other staff to resolve those issues. 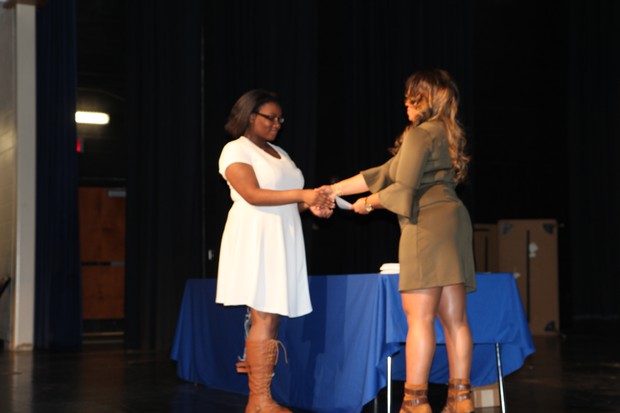 Southwest High School's Class of 2020 got a special treat as they made a Commitment to Graduate this month. Former NBA player Marquis Daniels spoke to the freshmen about his journey from the streets of Orlando to college and beyond.

"All I knew was street stuff," he said.

After growing up around drugs and gangs, Daniels' mother sent him to Mt. Zion Christian Academy in Durham, N.C., to finish high school. From there, he went on to Auburn University and graduated with a degree in sociology. Daniels joked with the students that he chose that major because it was easy, but that it had been helpful in his post-basketball life.

"I like dealing with kids, so it helped a lot," he said.

Daniels played 10 seasons in the NBA with the Dallas Mavericks, Indiana Pacers, Boston Celtics and Milwaukee Bucks. During his visit, he urged the students to set goals for themselves and avoid the "temptations" to make choices that keep them from graduating and reaching their goals.

"It's hard to get out of trouble, but it's easy to get into it," Daniels said.

The students also got a chance to walk across the stage and have their name called to feel what graduation will be like. 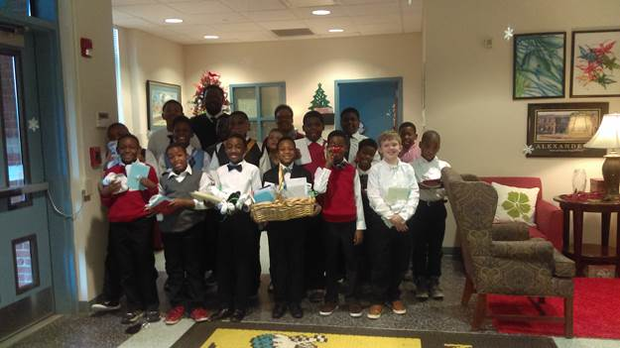 The Band of Brothers Mentoring Group from Alexander II Magnet School banded together for the holidays to spread greeting and cheers to the residents of St. Paul Living Facility for the elderly on Dec. 19. The group delivered greeting cards and socks to the residents while singing Christmas carols. 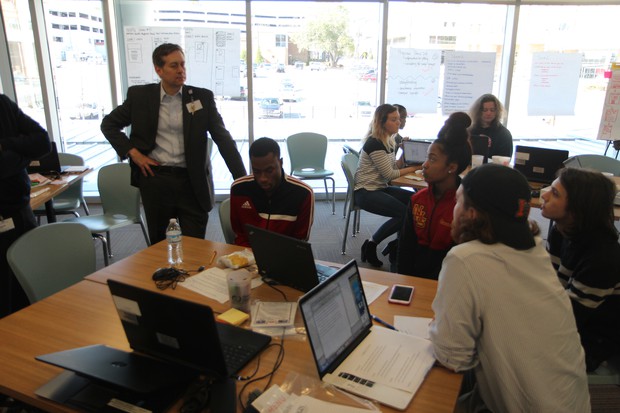 Several district students participated in a "hack-a-thon" event sponsored by Navicent Health recenty. The two-day competition put the students alongside students from Mercer to come up with mobile apps that would provide real-world solutions for the hospital system. The issues addressed included the check-out process, appointment scheduling and even food orders for patients and their guests.

"You need so much technology in the field of healthcare," said CTAE Director Cassandra Washington.

Washington added that the goal of the event was to show how students can use their technical skills to advance through postsecondary education into the workforce. Northeast High School's Alexus Norrington and Howard's Tate Testa were on the winning team. 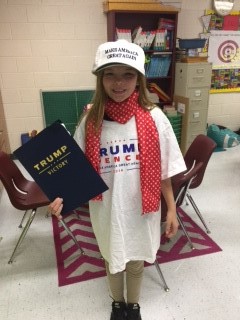 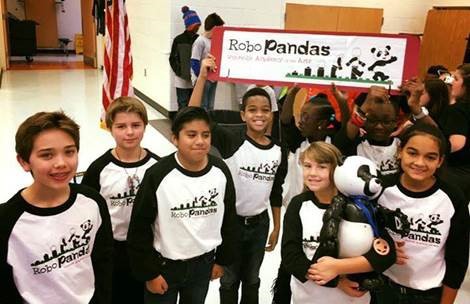 For the second time, the Vineville Academy RoboPandas robotics team is headed to the state First Lego League robotics competition. The event is scheduled for Feb. 4 in Gwinnett County. 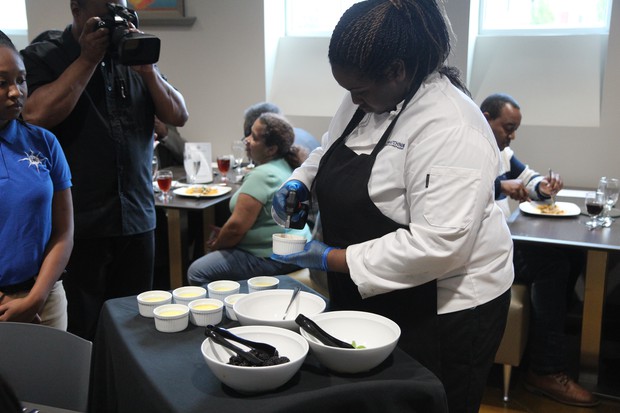 The Compass Rose Cafe at Hutchings College and Career Academy will officially open to the public in late February. Staffed by students in the Culinary Arts and Hospitality and Tourism pathways, the cafe will present gourmet offerings and is sure to impress! 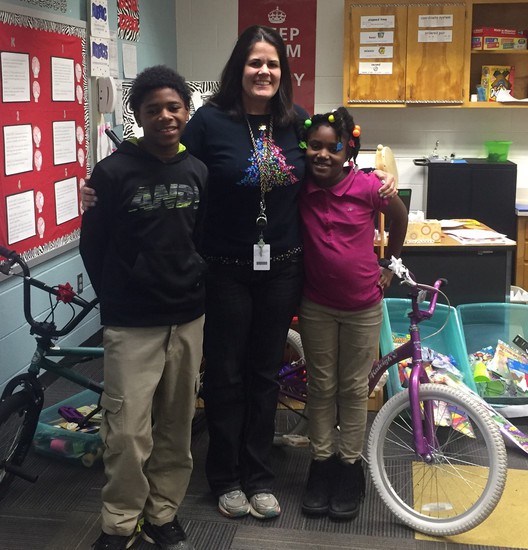 Brookdale Elementary School's Flexible Learning Program students were given the opportunity to win a free bicycle last semester. One boy and one girl from each grade were placed in the drawing, for a total of 12 entries, and fourth-grader Destiny Howard and fifth-grader Ki'Mar Smith were chosen.

Teacher Kelli Bercik said she's obtained three more bikes, which will be given away at the end of February. Students will have to excel in math and display positive behavior to win! 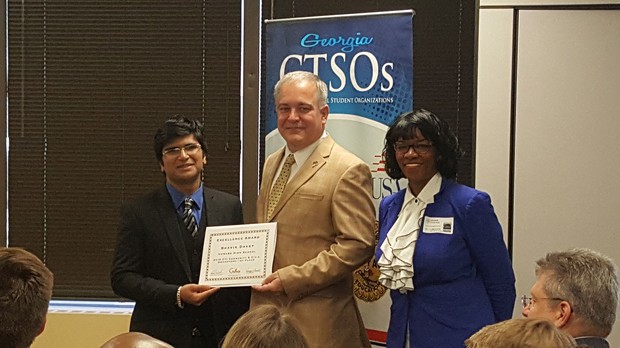 Howard High School junior Bhavik Davey was recently honored by State Superintendent Richard Woods for his efforts to raise awareness about domestic violence. Bhavik was one of just five Career and Technical Instruction (CTI) students statewide to receive the recognition.

In Bibb and Baldwin County, where he previously attended, Bhavik has worked as chairman for an awareness walk for violence victims. He's also attended workshops to learn more about victim advocacy. 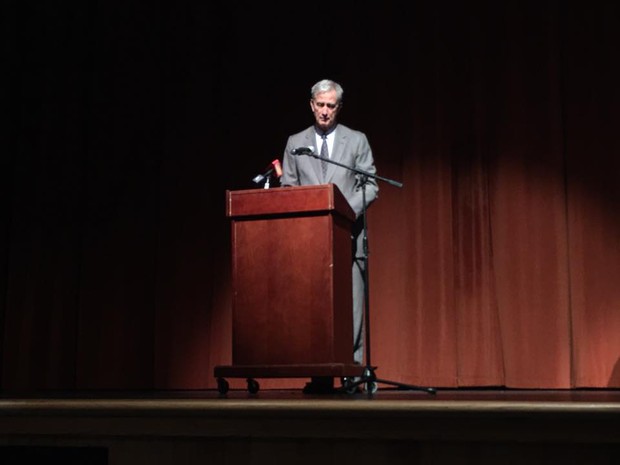 John and Bob Anderson joined the district and Community Foundation of Central Georgia to announce the Newton and Sarah Anderson Scholarship for Excellence. The scholarships of $10,000 each will benefit about 60 Bibb County students in ninth through 12th grade when they go to college. To be eligible, students must meet specific GPA and discipline requirements.
"Your education will be your primary rocket all your life," John Anderson said.

The scholarship will be funded through their mother's estate. Even though neither of their parents went to college, John Anderson said they always placed a high importance on education. Both men are graduates of the Bibb County School District, so they wanted to give back.

"The formation we received in high school is still with us," John said.

Couple didn’t attend college. Now, their sons are providing big money for teens to do so

www.macon.com
Brothers John and Bob Anderson, alumni of Lanier High School, have created the Newton and Sara Anderson Scholarship for Excellence through the Community Foundation of Central Georgia. The scholarship will award $10,000 each to 60 students for their college education. 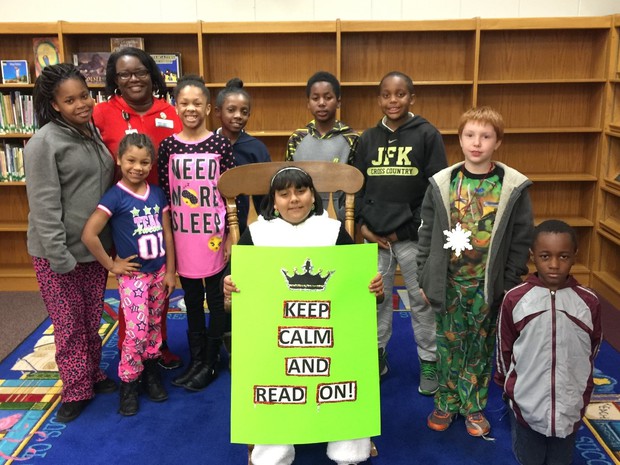 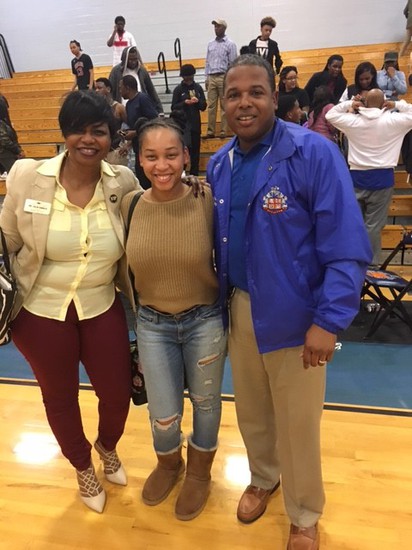 Central High School senior Aulona Graham-Simms organized a Seat Belt Awareness Campaign at Central and Westside High Schools. Working in conjunction with the Bibb County Sheriff’s Office, Aulona arranged to have an officer stationed at the exit from the student parking lot at both schools on the day of a big basketball game between the two programs. The officers checked to see if the students were wearing safety belts. All students wearing a safety belt was presented with a card for a free item from Chick-fil-A. All students not wearing seat belts were given warnings and reminded of the importance of wearing seat belts. 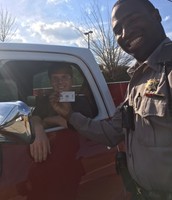 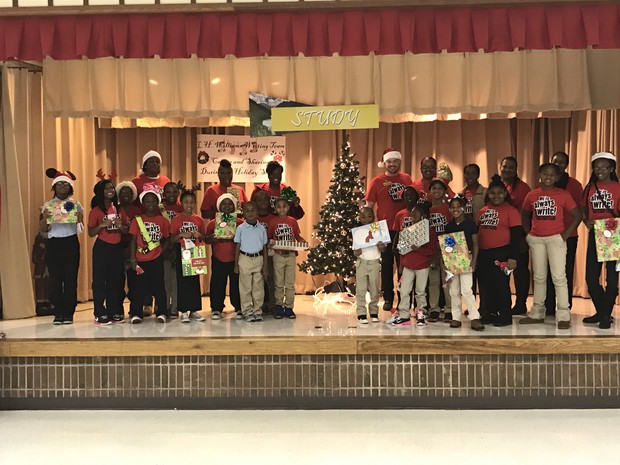 The theme of the holiday season for Williams Elementary School involved "caring and sharing," and the school's writing team took it to heart. They voted on a project for the season and decided to support a family from their school with a $150 Walmart gift card. The students didn't know which family got the card, but they were glad to help someone. 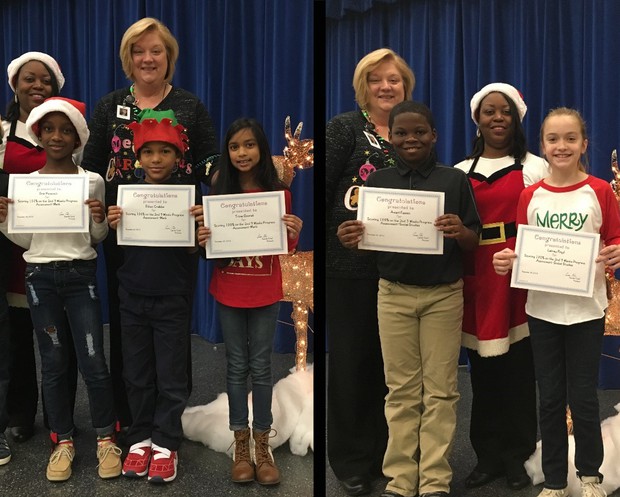 Several Heard Elementary School students were honored for making perfect scores on a section of the second nine weeks progress assessment. They are pictured with Principal Carole Cote and Assistant Principal Lashun Crawford. On the left are third-graders Erin Peacoc, Ethan Crabbe and Trina Goorah. On the right are fifth-graders Amari Fannin and Laney Floyd. Great job! 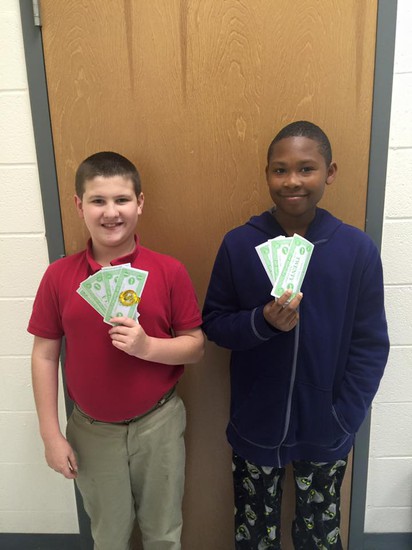 Congratulations to Tristan Ash and Ke'Areon Varnado who have read over a million words this year. Because of this feat, they've been welcomed to Skyview Elementary's Millionaire Club.